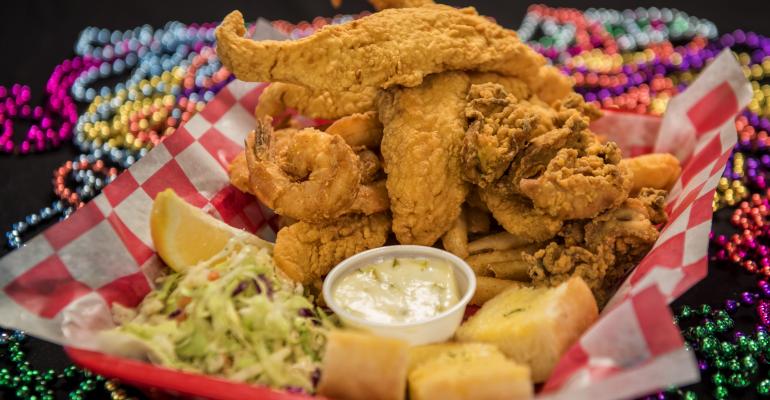 The Lost Cajun bets on appetite for Louisiana cuisine

Hoping that the culinary treasures of Louisiana are ripe for a comeback, an emerging concept called The Lost Cajun is growing out of Colorado.

The 10-unit chain was founded in Frisco, Colo., in 2010 by Raymond “Griff” Griffin, a native of Louisiana, where he operated a fishing lodge for years. After the disasters of Hurricanes Katrina, Rita and Gustav, as well as oil spills in the Gulf of Mexico, Griffin and his wife took a trip to Colorado and never left.

Though Griffin had never operated a restaurant before, he missed the Cajun food of home. So he found a 900-square foot “hole in the wall” with 15 seats and began cooking, calling himself The Lost Cajun.

“I’m not a chef. I’m a Cajun cook, and there’s a big difference,” he Griffin says. “”My food’s not pretty. It just tastes good.”

At first, the menu focused on a couple of gumbos, fried fish and beignets. As the line out the door grew, so did the menu. Now The Lost Cajun offers four kinds of gumbo, jambalaya, red beans and rice, various types of fried seafood, po’ boy sandwiches and more.

Guests not familiar with the cuisine are offered tiny samples before ordering. But Griffin says the concept has found fans in part because it’s not another burger joint, pizza parlor or sandwich shop.

“We’re at this tipping point where people are just worn out with the same old thing,” he observes. “It seems like it’s the same everywhere you go: You order at a counter, you get your drinks, they call your number. Here, you’re getting full service and having real authentic Cajun food.”

When friend and fishing buddy John Espey visited and saw the tiny restaurant’s success, he decided to open a second location of The Lost Cajun in Breckenridge, Colo., in 2012.

Later that year, Griffin started franchising the casual-dining concept. In addition to the first two, eight restaurants have opened since the beginning of 2014, and two more are scheduled to open this year, with another seven in the pipeline for 2017.

A key to multiplying the restaurants was figuring out how to make gumbo travel. “Gumbo is an art,” Griffin says. “To do it right, there are no shortcuts.”

A traditional gumbo takes about six hours to cook, he explains. Lost Cajun’s base is prepared in a commissary kitchen and cooking is finished at the various locations.

Griffin says he also has attempted to build the brand around a culture of Southern hospitality.

“I’m a Southern guy…. I say ‘sir’ and ‘ma’am,’ and ‘please’ and ‘thank you.’ So that’s our culture. Servers will say, ‘Chef, the order’s in. Thank you, chef,’ and the chef will say, ‘You’re welcome,’” he notes. And cursing is forbidden in the kitchen.
The restaurants serve Abita beer and “porch wine,” or what Griffin describes as “the kind of wine you drink on the porch with your mama out of a box.”

Some locations have a larger bar program with New Orleans-style cocktails, like bloody Marys and daiquiris.

Griffin estimates average unit volumes for The Lost Cajun range from $800,000 to $1.2 million, depending on location.

While chefs like Emeril Lagasse and Paul Prudhomme once brought the flavors of Louisiana to the table nationally several decades ago, Griffin contends the time is right to introduce Cajun cooking to a new generation.

Griffin says his late wife, who died in 2012 and held the title CFO (chief fun officer) came up with the name.

“When we’d vacation here in the mountains she’d say it’s such a shame that a couple of lost Cajuns just can’t get good food outside Louisiana,” he said. “I thought that was a heck of a name.”