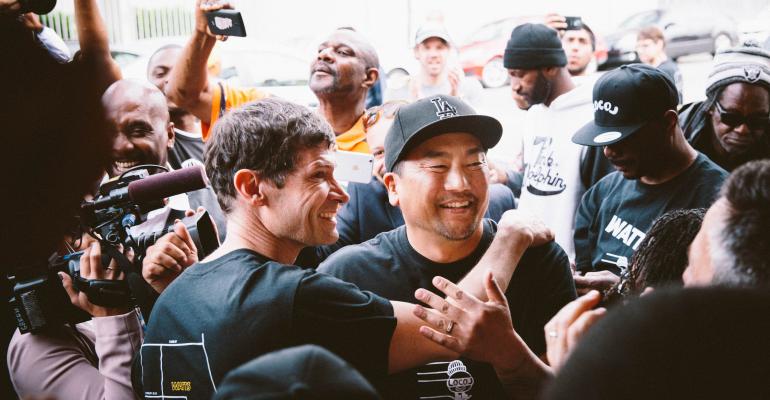 LocoL debuts in L.A. as new model for fast food

Two years ago at a food symposium in Copenhagen, Los Angeles chef Roy Choi posed a question: What if every high-caliber chef told his or her investors that for every fancy restaurant they would build, it would be a requirement to build a restaurant in the hood as well?

This week that dream came to fruition for Choi, who, with San Francisco chef Daniel Patterson, opened the fast-food concept LocoL in the Watts neighborhood of Los Angeles.

The concept is designed to challenge the status quo of American fast food, Choi said at a conference last year. The goal is to demonstrate that good food can be made at a price point that competes with the dollar menus of the large chains that have long dominated the landscape in communities like Watts.

“We fundamentally believe that wholesomeness, deliciousness and affordability don’t have to be mutually exclusive concepts in fast food,” the restaurant’s website states. “We believe that the giant corporations that feed most of America have degraded our communities by maximizing profits over decades. We believe that chefs should feed America, not suits.”

Sleek and modern, with black-and-white boxes of varying sizes serving as both chairs and tables, LocoL has an open kitchen. Guests order at touch-screen kiosks, or at the counter, and wait for their number to be called. There are only a handful of seats inside with another few box/tables on a small outdoor patio.

On the menu are “burgs” for $4, including a generously sized cheeseburger with Jack cheese, scallion relish and “awesome sauce;” a fried-chicken sandwich with slaw, buttermilk mayo and hot sauce; and a BBQ Turkey sandwich with buttermilk mayo that includes pulled turkey, rather than the typical patty.

Bowls are $6, including traditional beef chili with onions, crushed crackers and hot sauce; as well as more healthful options, like a crushed tofu and veggie stew with rice; or a “bulgar language” with green goddess creamy dressing and croutons.

“Foldies” for $2 include grilled taco-like options with carnitas or machaca, which is shredded beef, and “Crunchies” included both veggie and chicken versions of nuggets. “Yotchays” for $1 include sides like Southern-style greens; rice or spicy corn chips.

There are no fries, and no sodas, only $1 fruit-based agua frescas or coffee, which is roasted in house. For dessert: soft-serve ice cream ($4).

Breakfast, or “brekkie,” will be added later and will include $4 options like Egg in the Hole;  $3 yogurt and granola; or $2 “green juice.”

Choi, whose L.A. concepts include Pot, A Frame and the more-casual noodle-bowl concept Chego, has long been an advocate of elevated street food. He first achieved fame with his Kogi trucks that fused Korean and Mexican dishes and fueled the city’s food truck trend.

Patterson is the principal behind the San Francisco-based group that operates the high-end restaurants Coi, Alta CA and Aster, as well as Plum Bar and Haven in Oakland, Calif. Earlier this month, Patterson named former L2O chef Matthew Kirkley to replace him as executive at Coi, so Patterson could devote more time to his family and to LocoL.

At the MAD4 conference last year, Patterson noted that LocoL is not charity work. “It is a for-profit business,” he said.

Choi reportedly raised some funding with an Indiegogo campaign, and LocaL also received $275,000 in community development block grant funding from the city for the purchase of restaurant equipment. Such funding is available for projects that help revitalize neighborhoods.

The opening of LocoL on the Martin Luther King Jr. holiday brought out crowds that included L.A. Mayor Eric Garcetti, as well as Hollywood celebrities such as Lena Dunham and Jon Favreau.

Choi and Patterson are reportedly planning to open two LocoL units in the San Francisco Bay area in similarly underserved neighborhoods, as well as another in Watts.

Both Choi and Patterson declined to respond to questions about future plans for the concept, but Patterson last year said LocoL had potential for “millions” of locations.