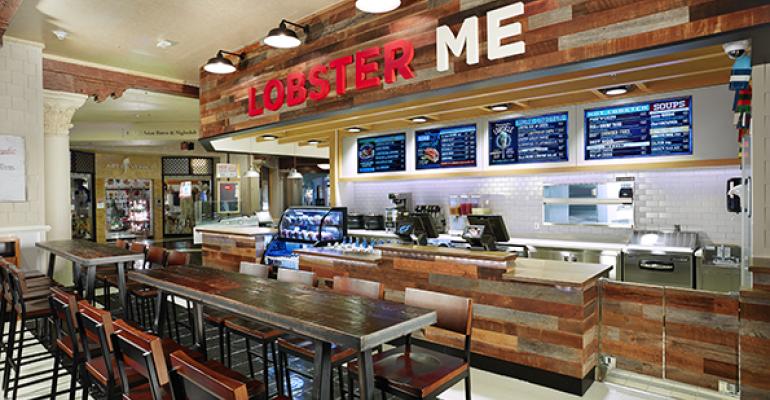 <p>Lobster and fast casual were made for each other, says Lobster ME founder Jeff Fine.</p>
Trends>New Restaurant Concepts

Once upon a New England vacation, Jeff Fine fell in love with Maine lobster. “The whole Maine summer experience, I thought, was something magical and not really known or appreciated on the West Coast,” says Fine, a Las Vegas native. So, like many restaurateurs, Fine turned his passion into a business, introducing some of that “Maine experience” to the uninitiated and establishing what’s becoming a nice little chain in the process.

Fine founded what’s now a five-unit fast-casual operation (plus a Las Vegas food truck), Lobster ME (as in the Maine postal code, but pronounced “me”). Lobster in a fast casual setting? Why not? Seaside beach shacks up and down both coasts have proved that you don’t need white tablecloths to sell seafood. And if he could serve up lobster rolls as good as those he ate on vacation, Fine was willing to bet that guests would follow. “Fast casual is perfect for lobster, marrying convenience and accessibility with the consumer demand for…high-quality, sustainably harvested menu items,” says Fine.

Still, lobster—especially lobster from Maine, which is widely regarded as the sweetest and most tender—carries a price tag that makes it less accessible than a chicken burrito or other limited service offering, and there’s no getting around it. Check averages at Lobster ME exceed $20 (even more at dinner), much higher than a typical fast casual outing. Still, it’s not a problem, Fine contends: “There’s an understanding in the market that lobster is expensive,” so the restaurant’s name alone prepares the guest. “The customer approaches with an understanding that lobster isn’t priced like other proteins.”

But in Las Vegas, procuring a product that lived up to Fine’s memories, at an acceptable price point, was harder than he anticipated. But that was before a seafood-savvy colleague introduced him to Kristen Bailey, Lobster ME’s current c.o.o. Bailey was just what Fine’s operation needed: A lobster industry insider—a Maine native whose resume includes jobs with the state’s Lobster Promotion Council as well as an upscale lobster producer and distributor.

“Maine is a small place and can be a little closed to ‘outsiders,’” Bailey admits. Her first order of business: establishing an office in her home state, where she could oversee the purchasing and product first-hand and strengthen relationships with suppliers. “That really let us set up the right infrastructure for our future,” Fine says.

Lobster ME specifies cooked claw meat for most offerings, including the best-selling lobster rolls (the menu varies slightly for regional preferences—“The Beltway” roll, offered at the Maryland location, for instance, features Old Bay seasoning) as well as cooked tails for another popular item, lobster skewers they call “lobsicles.”

Even though “our costs stay the same because of our relationships in the industry and a pretty stable demand,” Bailey says, Lobster ME’s food costs are north of 40 percent. The company can handle the expense because, according to Bailey, unit volume is pretty heavy at each unit. Locations such as Las Vegas hotels, as well as vacation and upscale entertainment districts deliver plenty of customers who won’t balk at higher price points.

“We can’t go everywhere, but we can find those places where people want an indulgence at an approachable price,” Bailey says. We’re finding there’s a niche of people who have an affinity for Maine lobster and seafood in general and we’re delivering a sophisticated product,” Currently, Fine and Bailey are looking to build out their current markets—Las Vegas, San Francisco and suburban DC. They’ll also branch out to a fourth, yet-unnamed market later this year. Fine says, “Our ambition is to grow the business to be as large as it wants to be.”