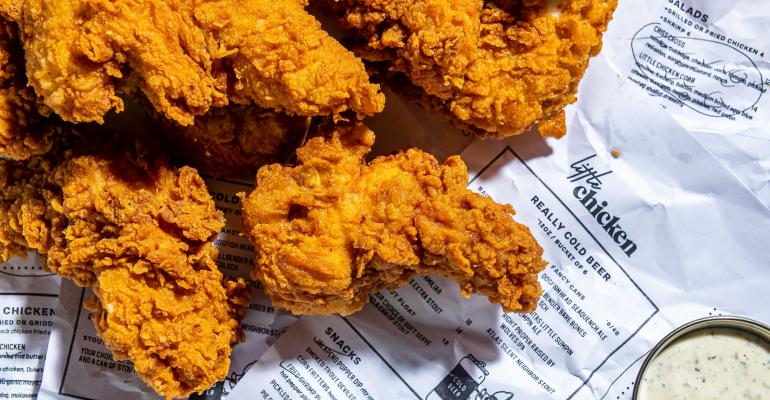 Rey Lopez
There are fried chicken sandwiches on the menu too, ranging from the namesake "Little Chicken" that comes with bread-and-butter pickles, spicy mayo and shaved onion, to a version with a jalapeno pepper jelly and pepper dip.
Trends>New Restaurant Concepts

Buckets, tenders, combos and sandwiches combine with strong beverage program and a bit of fun and games

That was the guiding principle behind the development of Little Chicken, a new fried-chicken concept that opened in late May in Washington, D.C.’s Midtown Center. The joint venture is a concept by Patten, owner of the Grazie Grazie sub shop, with Gerald Addison and Chris Morgan, chefs at Caribbean-style Bammy’s in the city’s Navy Yard. Addison and Morgan are also alums of the Michelin-rated restaurant Maydan.

With 70 seats indoors and another 40 in the backyard-style alley patio, Little Chicken offers fried chicken every which way: in buckets, as combos with sides, tenders, using white and dark meat with varying levels of spice. The concept also has a strong beverage program and a space with games.

Related: New on the Menu: Chicken skin with caviar and Southwestern dandan noodles

In order to create the best fried chicken, the team took a tour through the South to taste fried chicken from the mom-and-pop stores to the big chains — with stops in Charleston, S.C., Atlanta, Nashville and more — tasting close to 60 different versions. The team narrowed down sauce options from 40 to nine, despite a general consensus that they can't have enough sauces.

"A fried chicken restaurant is no different than any other. The prep is just as difficult, and we have to find harmony in what other menu items go along,'' Patten said.

There are fried chicken sandwiches on the menu too, ranging from the namesake "Little Chicken" that comes with bread-and-butter pickles, spicy mayo and shaved onion, to a version with a jalapeno pepper jelly and pepper dip. The team wanted to have their sides complement the chicken, with some lighter options such as a broccoli salad and cucumber salad, as well as more typical accompaniments, such as mac and cheese or fries. 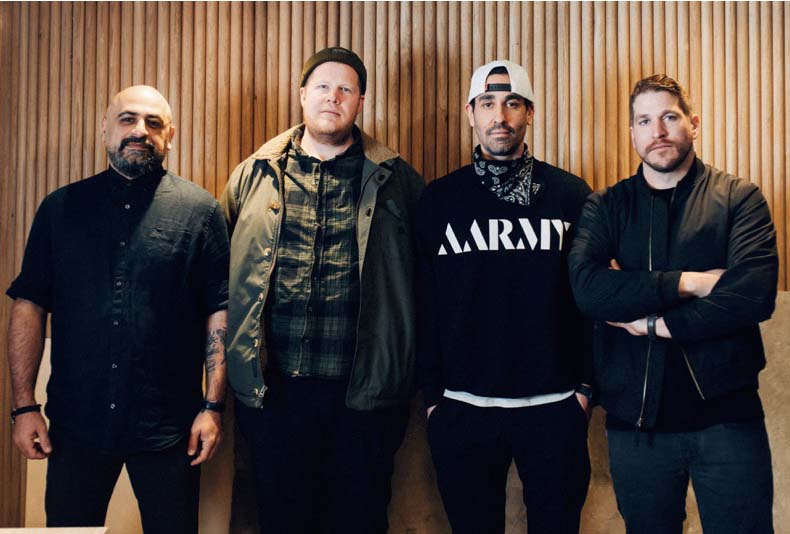 For Addison, fried chicken was much more challenging from a culinary standpoint than anticipated.

"Making mediocre fried chicken is easy, but making it excellent is a ton of work with lots of time and thought going into it. There are lots of nuances and very little to hide behind," the Michelin-starred chef said. "But for me it was a challenge I had to take on. I had to expand my skill set. This was both incredibly difficult and rewarding."

Prices are $8-$15 for the two- or four-piece bone-in box; $9-$25 for the three- to nine-piece tenders box. A bone-in bucket comes with two pieces each of thighs, wings, breasts, and drumsticks and goes for $28.

Small sides are $4 and larger sides are $8. Snacks such as jalapeno popper dip or corn fritters average $8. Desserts include a selection of pies, custard, or a mashup of both via a "Pyclone," which blends a pie with a custard.

The team plans on keeping sides and desserts seasonal, and are already thinking ahead to brunch with fun waffles to accompany the chicken.

The bar program from local barman Said Haddad was created to complement the space and the vibe. With a backyard alley feel that includes swing seats and colorful decor, the team focused on "drinks you would make if your friends come hang with you in the backyard." Palomas, margaritas, and familiar cocktails that can be scaled to a group are available, with every cocktail other an old fashioned available large format — served as a jug with a side of garnishes.

In keeping with the backyard party feel, all beers are canned and span a selection of nostalgic brands such as Miller Lite, as well as local and small breweries. Cocktails and wine range in the $10-$14 per glass, or $45+ for the jugs/bottles, and a high-end champagne is on offer for $140 for those who want to splurge. A selection of house-made fruit sodas at $5 are also available as a spirit-free option.

In terms of the Midtown Center location, Patten said, "We are surrounded by like-minded individuals, and thought about the restaurant ecosystem and the other players here. It's downtown, but it's more about the collaboration and collection of friends. This is not a one-dimensional space. The outdoor spaces with alleys at this location connect the indoor and outdoor bars and this placement allows us a concept that can continue to grow."

Patten was also the founder of a hoagie concept called Taylor Gourmet that won private-equity financing in 2015, but later filed Chapter 11 bankruptcy.

Given skyrocketing chicken prices in recent months, it was a difficult time to open a fried chicken concept.

"The price of chicken has doubled since the idea was a concept at the start of the pandemic,” Patten said. “But that did not drive us away from the original intent. We thought harder about the opportunities to balance out the shopping cart to align with the budget instead.”