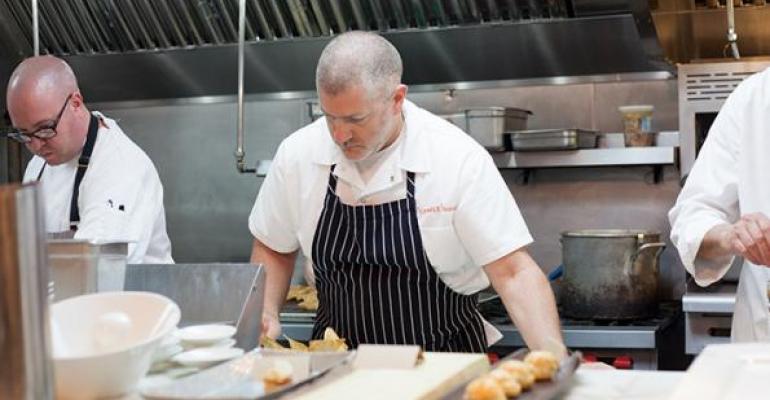 In the heart of downtown Atlanta, Legacy Ventures Restaurants has opened a unique event space designed to better leverage the growing company’s brands and employees.

The new Legacy Test Kitchen in November opened in an Embassy Suites hotel overlooking Centennial Park, a district where the Atlanta-based company also operates the rooftop restaurant Ventanas and the nearby restaurant-and-play concept Game X. Legacy Test Kitchen is a flexible two-story space with an open kitchen that can handle receptions for about 150, seated dinners for up to 100 and with private bar and dining space. It also has event-friendly audio and entertainment systems.

The concept will also serve as a literal test kitchen for Legacy, where dishes can be tested and potentially added to the menu at one of the company’s other concepts.

But rather than operate Test Kitchen as a restaurant that sometimes does private events, Blobaum explains the goal is to keep the space humming with events only, drawing from the labor pool that serves the group’s multiple restaurants throughout the city.

“We can draw from hundreds of employees that we have that want to pick up extra hours and maybe shift from working at Max’s over to an event,” Blobaum says. “It works out really well.”

The Test Kitchen is also home to Legacy’s catering operations and it serves as a storage space for equipment.

The new concept is another tool in Legacy’s arsenal, Blobaum says. The company is looking to grow several of its concepts outside the Atlanta area, and Legacy also serves as a developer and hotel operator. “We have a group of restaurants, which is super exciting. But the skill set, the purchasing, some of those things change with each asset,” says Blobaum. “Even if we look at purchasing as a group, sometimes the cheese we buy is very different for each restaurant. But if I had a bunch of Max’s, then I could buy mozzarella at volume.”