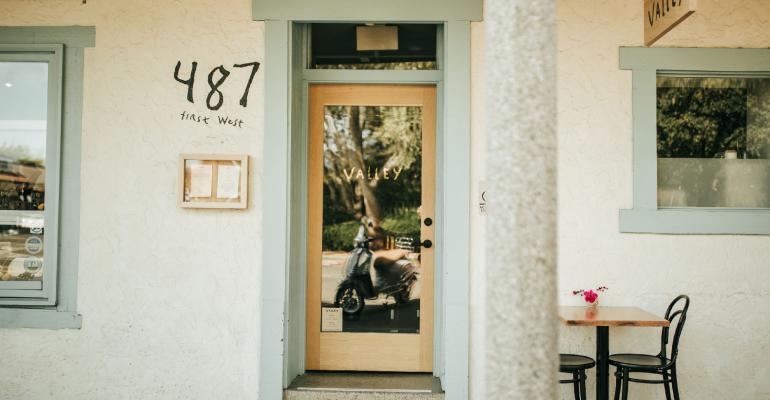 Their paths first crossed at a tiny wine bar in the East Village of New York City. Tanner Walle was a quick-witted, irreverent sommelier in a t-shirt and sneakers who could charm the skin off a snake. Lauren Feldman was an energetic sprite who dove headfirst into anything presented to her. Her dreams of a fashion career had first brought her to the big city, but she instead found herself quickly falling in love with the world of hospitality, and he had a love for people and an ear for music that could be seen in his always-animated body language. Late one night, he served her a glass of wine after she worked her own shift on the floor across town. Little did they know that that encounter would kick off a series of events that would change their lives forever. Thirteen years later, they would be married, living on the other side of the country, and owners of one of the hottest, most dynamic restaurants to hit Sonoma County in years.

Valley Bar + Bottle is located in Sonoma, Calif., where it occupies the historic Leese-Fitch Adobe building, built in 1836. Founded by four friends (two couples), Valley is a 52-seat restaurant, wine bar and bottle shop that opened in July 2020 and focuses on “California home cooking,” offering a changing menu that is based around seasonal produce and a connection to personal histories. Dishes range from small plates of mortadella or shishito peppers to larger items like trout with potatoes and tomatillo, or khao soi curry with chicken and noodles — “simple, unfussy food that is craveable,” Feldman said. 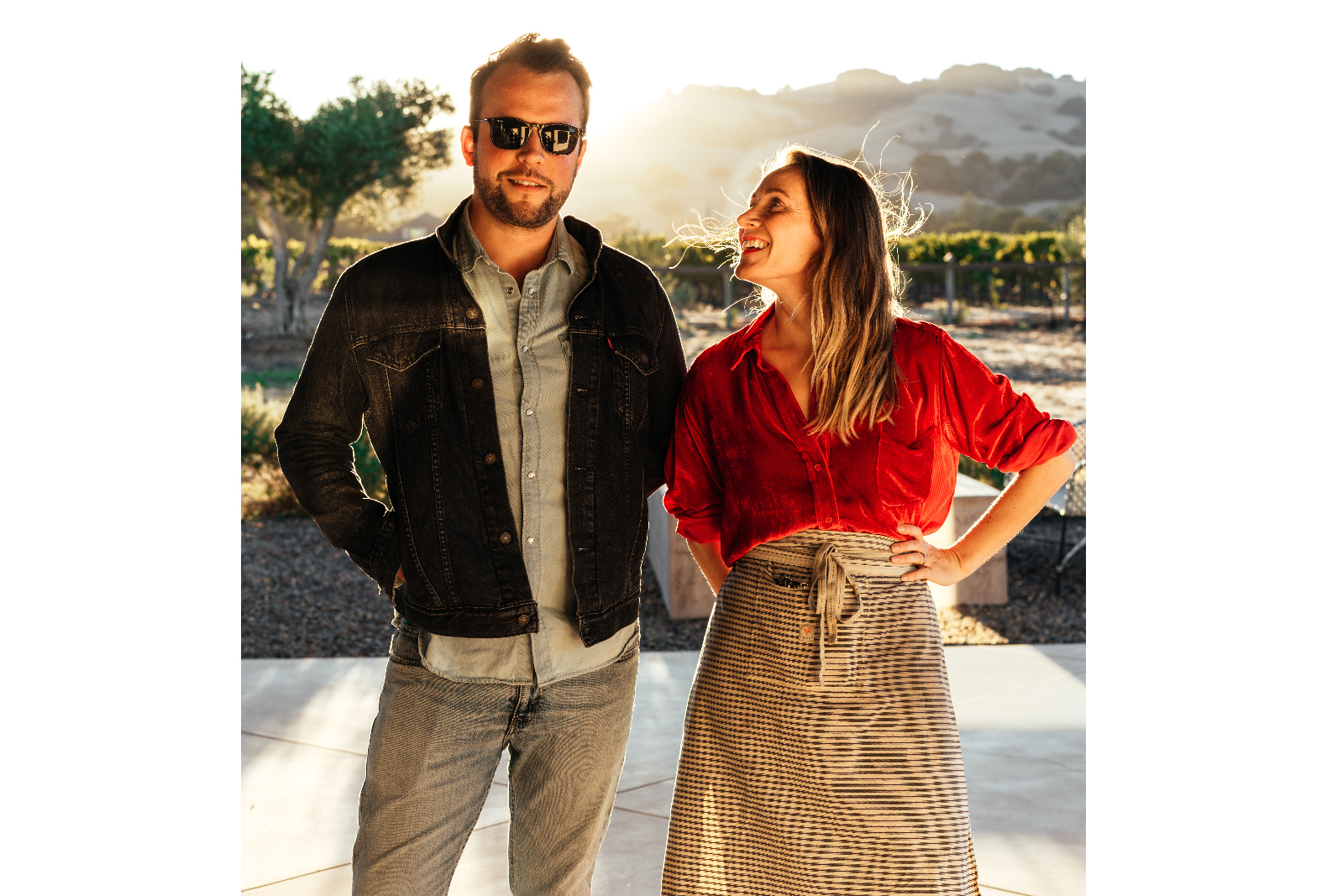 The other couple, Emma Lipp and Stephanie Reagor, handle the back of the house, while Feldman and Walle oversee the front of the house. The extensive wine list focuses on producers from around the world who farm organically, biodynamically, or with regenerative and traditional agricultural practices. Less than a year after opening, Valley Bar + Bottle was one of 27 operations to be named in Esquire magazine’s list of the Best Bars in America, but the real accomplishment is that it ever opened in the first place.

“When COVID first hit, we soon found ourselves stuck …  due to a total halt on contractor work,” Walle said. “We had been building out most of the restaurant ourselves, with a drain issue that only a plumber and contractor could help with. We were so close and were threatened with fines if we continued — right in the thick of the closures! Once a measure or two were lifted, we were able to put the final touches on the bar portion and we just said ‘let's do this.’ Thankfully we knew, even with social distancing, that we could successfully host guests outdoors, which allowed plenty of space between tables.” 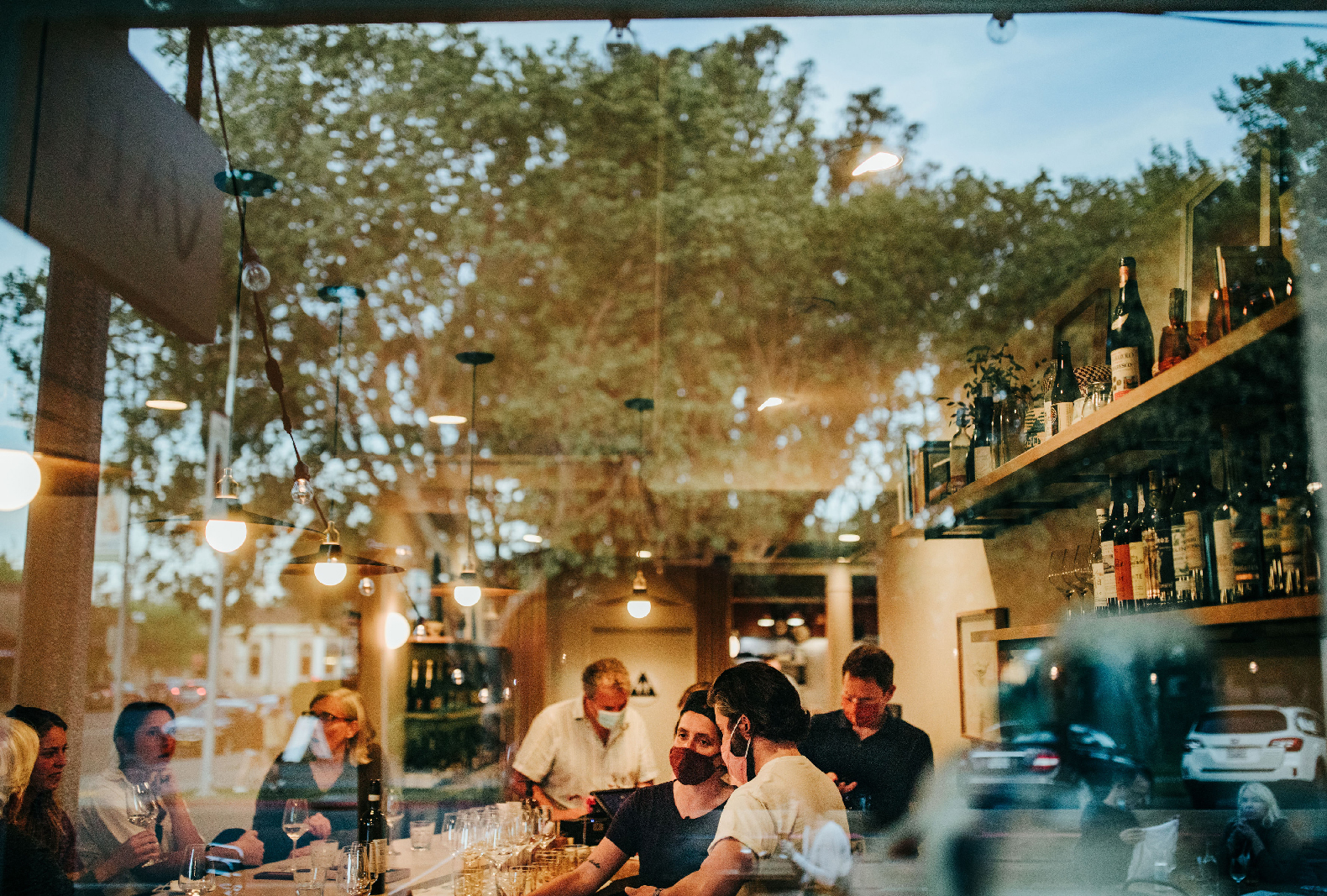 And so, less than six months into the pandemic, and after months in limbo, Valley Bar + Bottle opened its doors in July, with the summer weather and large patio serving as a lifeboat to kick things off. Feldman and Walle had been running an online wine club for a few months to stay busy and build buzz around the project while construction puttered along, and once open, they were quickly embraced by the community as a place that felt local, but somehow different than anything Sonoma had known. It’s that special juju that only comes from operators who have honed their vision over decades in the biz.

Walle began working in restaurants in 2004, answering phones at Hearth restaurant in New York City and eventually helping open its sister wine bar, Terroir, just 50 paces up the street, in 2008. It was at Terroir where Walle found himself front and center at what would become one of the most revolutionary wine bars in New York City’s history, and where he developed his extensive wine knowledge and his love of service and hospitality. Terroir’s irreverence coupled with a clear vision of what that wine bar should be fueled him when it came time to ponder what Valley was going to offer. 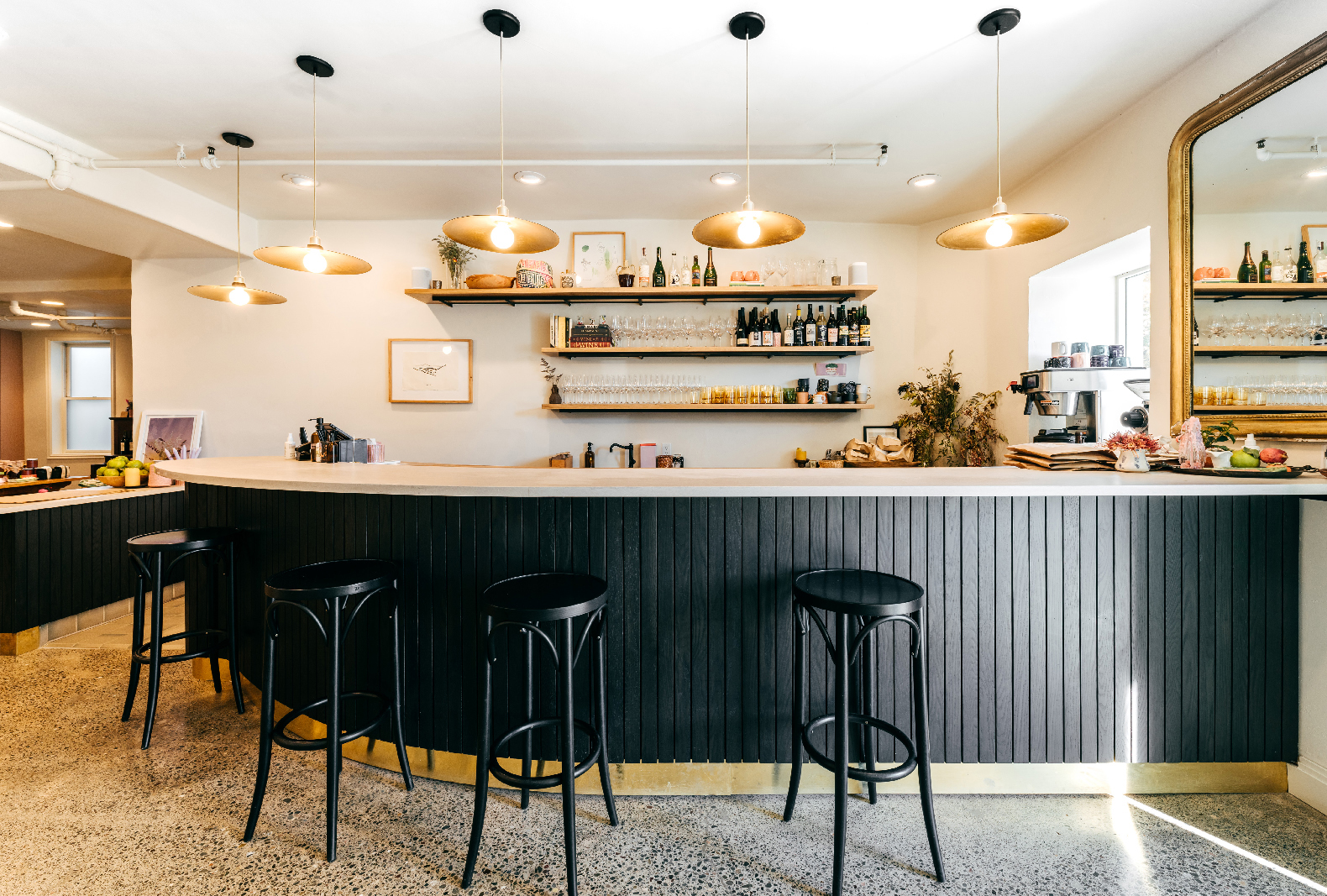 “For me, it just comes down to honesty,” Walle said, when discussing his approach. “No magic tricks, and no B.S. Just be a sweet professional with a well-defined journey to take your guest on. There's a beginning, a middle, and an end. Execute and be grateful they're giving you their time and money. Show them love, empathy and excitement. Be honest. Love what you do and be sure they know it.”

Feldman also had a path that led her to work under some of the best on the New York restaurant scene, with stints at L’Artusi, dell'Anima, and Anfora with restaurateur Joe Campanale. But her California roots kept calling her back and she returned in 2010 to team up with Andrew Mariani at Scribe Winery to launch its hospitality program. She was able to learn another element of the business working at a winery, but restaurants continued to beckon her and she took off for a stint on Martha’s Vineyard in Massachusetts, followed by a move to Nashville where she ran the wine program at the Sean Brock restaurant Husk.

As she gained more experience, she came to believe that owning her own place might be her destiny.

“My time at Scribe helped me realize that there was a need for something a little edgier and more youthful in the Sonoma community,” Feldman said. “Somewhere where the people, like me, that had moved from big cities to work in the industry felt like it was for them. When Tanner moved out west, I kind of knew we would do it together. I knew that I wanted to open a restaurant with friends, I knew I couldn't do it on my own, and I knew that if we did it independently we would never see each other! Now we see too much of each other, but that's better than the alternative. There was a need for what we wanted to do and it was a community we wanted to really set down roots in. It is my home.” 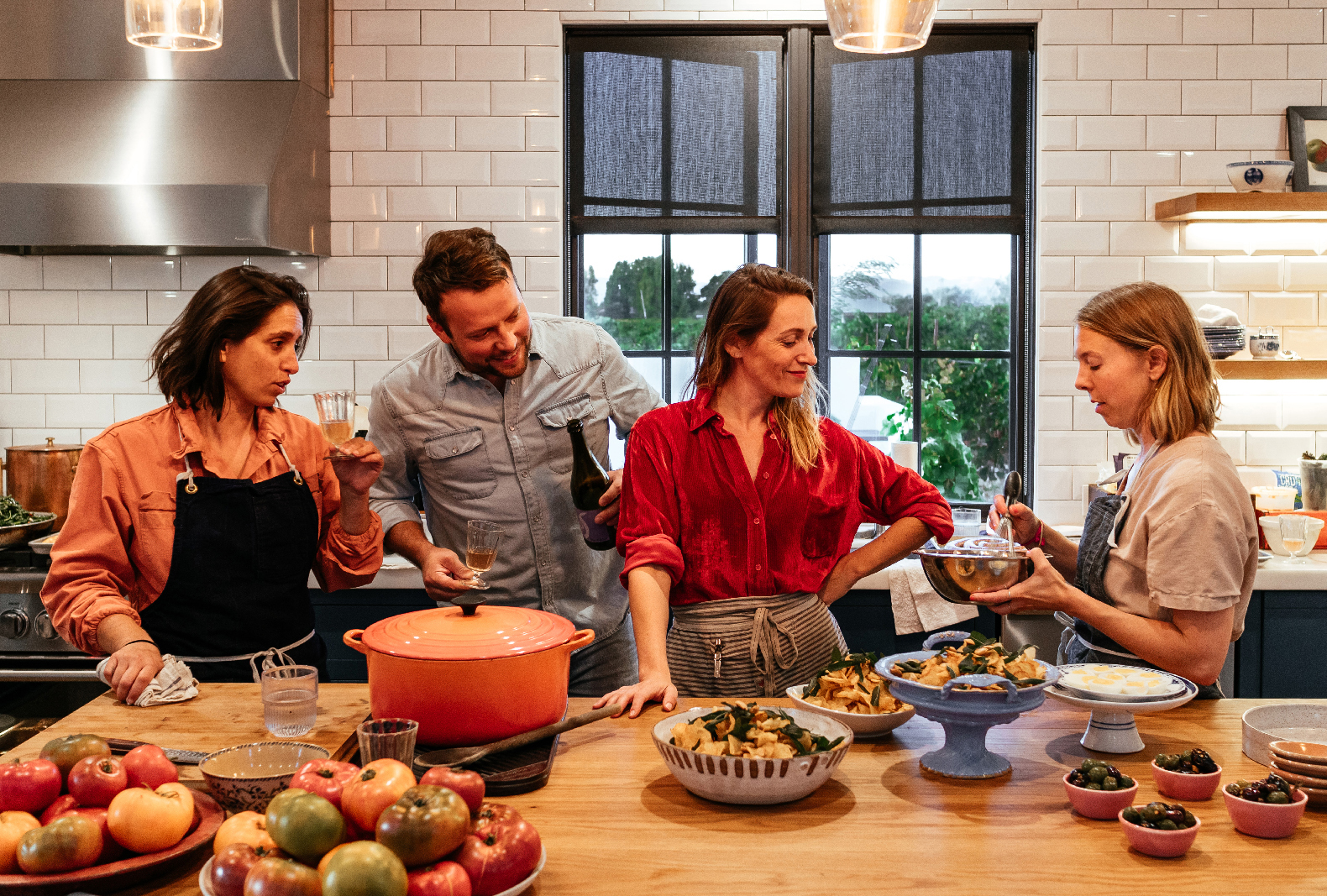 The wine program at Valley is unique, and is driven by what Feldman and Walle saw as a gap in what other nearby operations were offering.

“We're in wine country but there aren't many places to buy wine that's not from around here,” Feldman said. “Clearly there are a lot of people that work in the industry that have an interest in these types of wines, and we wanted to be a place where people could get them without having to drive to Santa Rosa or down to San Francisco. We do a reverse-corkage essentially, a 25% discount off the wine list to take the wine home with you instead of drinking it in-house. We also have a bottle club, which allows us to offer some smoking deals to our members.”

Wines from Burgundy, Venezia, Sicily, Rioja and Austria are found alongside small producers from all over California, with most of the selections priced in the $50-$100-per-bottle range. Despite all the demands, the constant excitement, and the unforeseen challenges of opening a new restaurant, especially during a pandemic, Feldman and Walle have stuck to the principles they learned firsthand from their hospitality mentors. They saw the power of attitude, the power of example, and the power of a strong staff. And they have advice for other operators.

“Focus on the things that you love and don't take any of it too seriously,” Feldman said. “Be willing to have fun with it, and find a way to keep it all efficient so you can pay well, provide benefits and get employees what they need. Listen to them, and work alongside them, not from above them.”

“We can’t take care of our guests until we take care of each other, especially during these uncertain times,” he said. “I approach building a strong team through humor and empathy, knowing the staff are the veins that pump blood through the restaurant.”

Today, Valley Bar + Bottle has 18 employees and has firmly established itself as a beloved destination for locals and visitors alike. Walle and Feldman greet guests and work the floor together, bouncing in and out of the many roles they play.

One recent guest on Yelp described their experience at Valley this way: “Their menu is so fresh, and creative, while the wines are unique and eclectic. It’s like a backpacking tour through Europe.”

For Walle and Feldman, landing in Sonoma is just one of the many journeys they have embarked on from the fateful night when he poured her a glass of wine, not knowing the future they would one day share. As Walle puts it, at the heart of it, “It's all been a bit serendipitous, and it just so happened I fell in love with an old friend.” Whether that old friend is Feldman, or the service floor, or both, will be left unsaid.