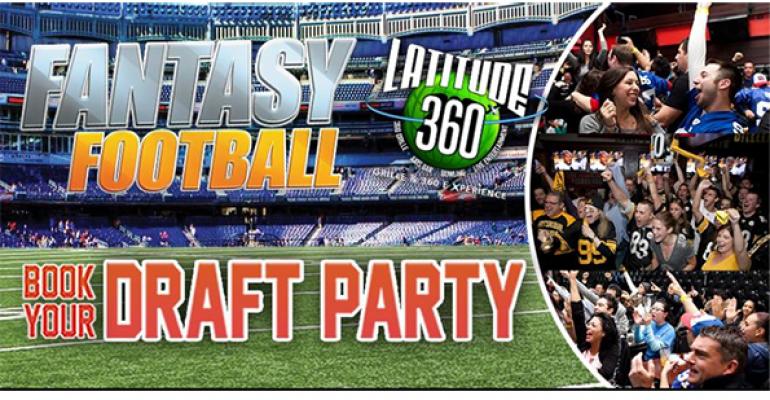 Latitude 360 wants to cash in on fantasy sports boom

A  handful of restaurants, particularly Buffalo Wild Wings, already attract legions of free-spending customers by hosting draft parties and other fantasy sport league events. Jacksonville, FL-based Latitude 360 is fantasy sport-friendly, too, but wants a bigger piece of the action. To get it, this three-unit restaurant/entertainment chain is acquiring daily fantasy sports gaming network Major League Fantasy, tapping into a nontraditional revenue stream any restaurant would covet.

It’s a bold move the company needs to drive growth. Right now, Latitude 360 has units in Indianapolis, Jacksonville and Pittsburgh. Seven more locations are on the drawing board (Albany, Minneapolis, Boston, South Boston, Jersey City, Wall Street, Brooklyn and Chicago). It aims to have all 10 locations up and running by the fourth quarter of 2016.

In size and scope, the Latitude 360 concept operates on the scale of a Dave and Buster’s with additional entertainment options that include a comedy club, a dine-in movie theater, live nightclub–style musical acts and what the company dubs “luxury bowling.” Latitude 360 pitches itself as a “broad spectrum entertainment and full-service dining venue”—hey, there’s even Latitude Lit, a cigar lounge. The 77-item restaurant menu features popular favorites drawn from both bar food and casual dining categories.

Latitude 360’s investor presentation claims it ranks among the top four restaurant chains in average gross sales per unit in the U.S. The units themselves are huge (50,000-70,000 square feet), and the for-fee aspect of its membership card program is on track to bring in nearly $1 million a year.

This setup positions Latitude 360 to make money in multiple ways. That’s not how it has worked so far.

Latitude 360 is publicly traded (LATX). SEC filings show that in the first six months of 2015, the company lost nearly $13 million, almost $8 million of that in operations. Its stock price, a relatively healthy $4 just two years ago, has shrunk to 13 cents a share.

But the company has a good idea how it can turn those numbers around in a hurry: fantasy sports. Here’s how Latitude 360 describes the market it’s pursuing:

“According to the latest data from TechNavio and the Fantasy Sports Trade Association (FSTA), the growing popularity of the fantasy sports market will remain strong for the foreseeable future. With a 36.9 percent year-over-year growth in the player base to around 56.8 million as of 2015, buoyed by a projected compounded annual growth rate of roughly 10.32 percent through 2019, fantasy sports are quickly becoming a major attraction in their own right.

“The demographics of the core market are also choice, with 66 percent of players being men, the average player age being 37, 57 percent of players possessing a college degree or higher, and more than 47 percent of the players having a household income in excess of $75,000 a year.”

No wonder Latitude 360 wants in. These are exactly the type of customers any restaurant that has a sports bar component hopes to attract.

The overall value of the fantasy sports market is estimated at $26.4 billion. The average fantasy fan spends $465 per year. The current craze for daily games should only drive these numbers higher.

Some of the revenue that flows through the fantasy sports industry is returned to winning players as prize money in daily, weekly or season-long contests. This year, FanDuel is offering a $1 million grand prize to NFL fantasy players. DraftKings will give away $2 million to the winner of its NFL Week 1 mega-tournament. But a lot of the revenue is retained by the company that sponsors the contests.

Latitude 360 wants to become one of these companies. Keep in mind that because fantasy sports are considered a game of skill, they’re not classified as gambling.

“Despite the continued spread of other types of gambling across the U.S., from casinos to lotteries, sports betting has continued to be isolated to either Las Vegas or niches like horse racing,” the company argues. “Because fantasy sports exist in an area protected by an Unlawful Internet Gambling Enforcement Act of 2006 exemption, they are the perfect way for people to scratch the gambling itch and win big money, actually leveraging their knowledge of the players and their favorite sport in order to succeed, rather than merely trying to court Lady Luck.”

Latitude 360 is getting into the game by partnering (and soon, acquiring) Major League Fantasy, a daily fantasy sport gaming network.

“The MLF acquisition makes Latitude 360 the first such operation to offer customers live, in-venue fantasy sports books, and the platform put together by MLF is sure to continue successfully winning over new players in the same manner that it has been.”

Expect rapid expansion if Latitude 360’s fantasy sports gambit pays off. But other operators may wish to explore ways they can attract this new breed of fan by making their restaurant fantasy sports-friendly.

How? Start by understanding how deeply these fans are involved. They’re not rooting for an actual team; they’re rooting for an imaginary team they’ve drafted themselves and then paid to enter in online fantasy contests. Helping these customers enjoy their real-world restaurant experience while their fantasy fortunes play out on your TV screens is a huge opportunity if done right.