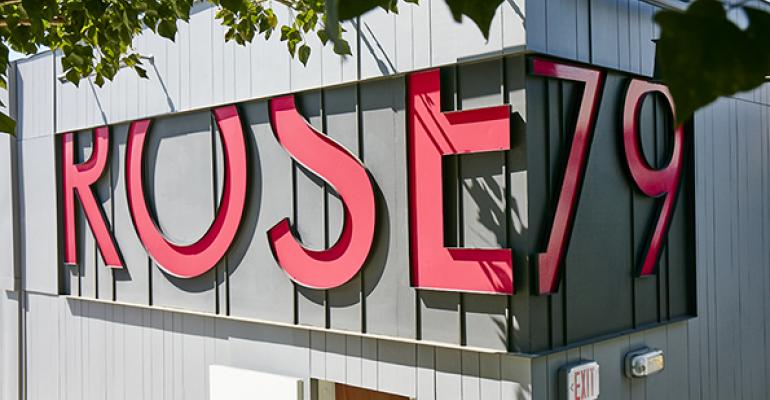 An iconic restaurant in Venice, CA, was reopened late last year by chef Jason Neroni and multi-concept operator Sprout L.A., 36 years after it was founded and became a bohemian hangout for the surfing crowd.

Originally known for its breakfast and lunch, Rose Cafe is being expanded to include dinner, a full market and bakery, as well as a 40-foot bar with cocktails by Julian Cox and Nick Meyer.

The restaurant is part of the L.A. area’s history, with loyal guests who were initially resistant to change. The redo also reflects the beachside town’s rapid evolution, with an influx of tech moguls building million-dollar homes next to tiny aging bungalows.

“People were scared that we were a corporate restaurant group, but we’re not that at all,” says Neroni, who lives in Venice himself.

Neroni said his first goal was to honor the spirit of the original Rose Cafe, bringing back as many of the early restaurant’s staff as possible, and making sure all customers felt welcome.

“It’s still Venice, through and through,” he explains. “We’ve had people saying, ‘I came here every day for breakfast’ and ‘it’s where I met my girlfriend,’ and stories like that. It’s pretty amazing, the heritage.”

Tapping local artists, the new operators have elevated the restaurant’s “urban bohemian” vibe to one that is more “posh bohemian,” according to press materials.

For the menu, Rose Cafe offers diverse price points, from $9 breakfast burritos to a veal porterhouse at dinner for $35.

The 8,000-square foot, 240-seat restaurant serves breakfast all day and does about 1,200 covers at brunch on Sunday alone. For the bakery, Neroni brought in pastry chef team Jacob Fraijo and Christina Hanks, who worked at Bouchon Bakery in Beverly Hills and Quince and Cotogna in San Francisco, before joining Rose Cafe.

Dinner will be phased in. For now, the restaurant is serving a casual “hearth menu” with short ribs, pizzas and baked pastas from the wood-fired oven. This month, a more detailed and focused menu will be introduced for the back patio, where the restaurant has an edible garden.

It won’t be fancy, Neroni explains, but a more refined reflection of his “New California” cuisine, which is seasonal and influenced by global flavors from Korea, the Philippines and Mexico.

Also the owner of two pizzerias in New York City, Neroni previously opened the Superba Snack Bar and East Borough concepts in the L.A. area with American Gonzo, though he’s no longer working with that multi-concept group.

So far, the new-and-improved Rose Cafe appears to be embraced by the community.