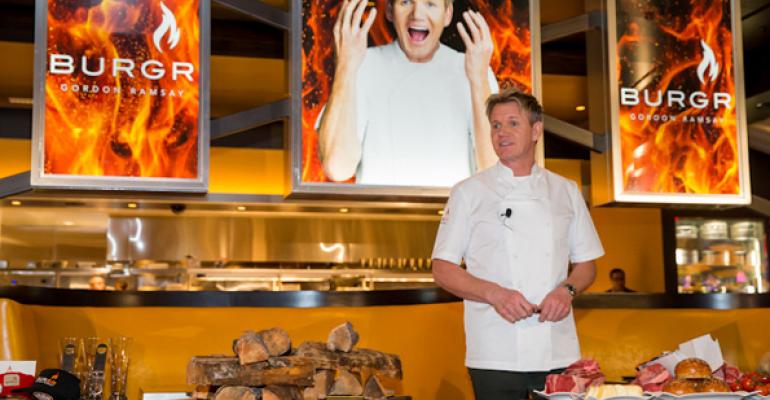 Gordon Ramsay cashes in on the burger boom

We know from watching six seasons of FOX’s Kitchen Nightmares that Gordon Ramsay can resuscitate even the worst of failing restaurants. But how is he at creating something new? Specifically, how well would this Michelin-starred chef fare when he has to devise a concept that would work in the crowded and highly competitive full-service burger segment?

The answer to this question is now on view at the Planet Hollywood Resort & Casino on the Las Vegas strip. That’s where Ramsay last month opened his knockout of a full-service burger restaurant, BurGR (the “GR” being Ramsay’s initials).

But before we take a closer look at its menu, let’s explore why Ramsay’s BurGR came to be. Most new restaurants can be categorized as concepts in search of an audience. With Ramsay, it was a case of an audience in search of a concept. His first Las Vegas restaurant, Gordon Ramsay Steak, opened at Paris Las Vegas just last summer. It ranks as one of the most successful new restaurants Las Vegas has seen in years. Despite a very high price point, this place did more than 82,000 covers in just its first six months.

No wonder January saw not just BurGR but another Gordon Ramsay Las Vegas restaurant, Gordon Ramsay Pub & Grill, open, the latter at Caesars Palace. That’s about as fast as developers could build new restaurants once they figured out how much of a draw Ramsay’s name and food were.

But BurGR seems like anything but a rush job. The 200-seat restaurant’s menu is designed to take the sit-down burger restaurant dining experience to a new level. Ramsay doesn’t reinvent the wheel here, but he plays close attention to the ingredients that are used, to the way those ingredients are prepared and to the way the finished dishes are presented to customers. It all supports price points that make other burger-segment operators drool.

BurGR’s menu offers five starters, dubbed “Snacks.” They include Roasted Jalapeno Poppers for $12, Salt & Vinegar Hummus at $10, Five Spice Chicken Sliders that cost $12 and Honey Pig Bao Buns made with pork belly that go for $13. “Greens” has just two options: a $12 Kale Granny Apple Caesar Salad and a Soba Noodle Chicken Salad for $13. A trio of “Devil Dogs,” at $12-$14, rounds out page one of BurGR’s three-page menu.

Page two lists eight burger options priced at  $13-$16. They’re made from a blend of short rib, brisket and chuck, basted with “Devonshire butter,” cooked on an open-flame, wood-burning grill fueled by a 60 percent alder and 40 percent apple wood blend and served on “milk-based brioche buns.” A trio of “Stacked-Two Meats” options includes the Artisanal burger topped with shaved prosciutto and dried salami plus raclette cheese priced at $16.

The French fry lineup—regular, truffled and sweet potato—is priced in the $8-$11 range.

The third page of the menu is where customers find what Ramsay dubs his “Sugar Fix” lineup of pudding-infused milkshakes. All five shakes cost $9 and appear to be aimed at customers for whom a regular milkshake isn’t thick enough or sweet enough. One version adds chocolate hazelnut pudding to a hand-dipped coffee shake and garnishes it with a praline cookie; another starts with a peanut butter shake, adds banana pudding and is topped with a gingersnap cookie.

Non-shake aficionados contribute mightily to BurGR’s overall margins when they pay $4 for a simple cup of coffee or fountain drink.

BurGR’s menu is easy to execute but still delivers a strong check average, even from customers who don’t partake of one of the 30 beers displayed on the frozen tap wall or sample the cocktail lineup.

If you boil down the advice Ramsay gives desperate restaurant owners on Kitchen Nightmares, it’s always the same. You don’t have to reinvent the wheel to have a successful restaurant. All it takes are good ingredients that are carefully prepared, then arranged in attractive presentations and served in a nice-looking dining room. No more, no less. He’s followed his own advice at BurGR. If you’re looking to get into this still-growing segment, you may wish to follow it, too.

This promotion will bring in the brainiacs
Feb 04, 2013