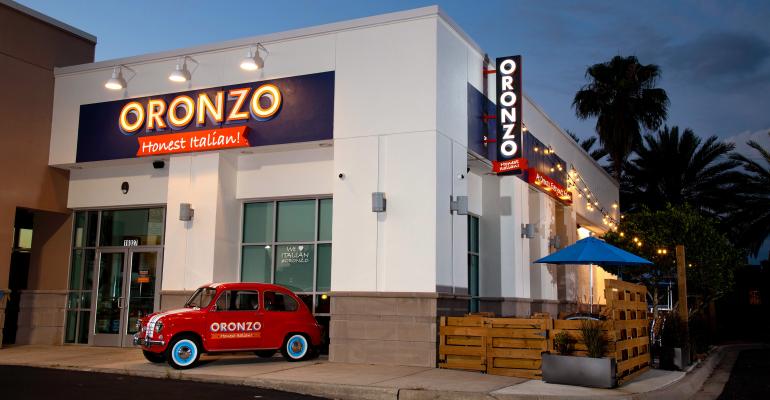 Oronzo
The Fiat 600 on display outside of Oronzo.
Trends>New Restaurant Concepts

Oronzo Honest Italian opened in Tampa on June 16 with a menu of Italian burritos, bowls, pastas, and salads

Front Burner Brands and Bavaro Hospitality have partnered together to create Oronzo Honest Italian: a new Italian fast-casual concept that opened in June in New Tampa, Fla. with a menu of Italian burritos, bowls, pastas and salads.

The new concept is a partnership between Dan Bavaro, founder and CEO of Bavaro Hospitality, which is parent to the Bavaro's Pizza Napoletana & Pasteria concept, and Bob Johnston, CEO of Front Burner Brands, which manages The Melting Pot Restaurants Inc. The partners have plans to expand the Oronzo brand first throughout the Southeast with a long-term goal of 500-plus locations nationwide.

Bavaro and Johnston want to reinvigorate the idea of what Italian casual dining looks and tastes like and to expand their concept in a fast-casual space traditionally dominated by “build your own” bowls, burritos and salads.

“You don’t come in to Oronzo and order two slices and a Coke,” Bavaro said. “We sell pasta from scratch in Chinese takeout containers; we’re taking piadina [Italian flatbread]and instead of folding it like they do in Italy, we’re rolling it into burritos. […] We’re attacking Italian food from all angles that guests don’t typically experience.”

The idea for Oronzo was born in 2016 when Johnston and Bavaro began talking about opening a fast-casual Italian restaurant together. In 2018, that idea became reality when the two business owners formed a joint venture partnership to open Oronzo. When COVID-19 hit, the partners were in the midst of development, so they were still able to move ahead and opened the restaurant on June 16. The biggest challenge, they said, has been securing a beer and wine license, which they should soon have for their first location.

When customers enter the restaurant, they will enter through the kitchen area like you’re entering through the back door or through someone’s home, “and the first thing you will see is a piadina being cooked on a flattop right in front of you, and someone else preparing homemade pasta,”  Bavaro said.

Immediately, customers will note that they’re not in what you think of as a typical Italian restaurant: there’s an authentic, vintage Fiat 600 car outside on display where people have been posting photos to Instagram, and kiosks for ordering as soon as you walk into the restaurant, instead of getting herded through an assembly-style line. Additionally, the team is working with Uber Eats and DoorDash for pickup and delivery orders.

“When you think of stereotype of an Italian restaurant, you think red-and-white tablecloths with candles or other more institutionalized vibes,” Johnston said. “Our vision was that Oronzo can be more than that; it can be enjoyed in a way that modern Americans live their lives.”

Another aspect of Oronzo that stands out from other Italian-American brands is their focus on lighter fare. While the restaurant is “not a health-food concept by any means,” Johnston said, much of their menu is not as heavy or calorie-laden as a typical “red-sauce joint” with super-thin crispy flatbreads and salads that round out the menu instead of heavier pastas piled high with cheese and sauces.

Bavaro and Johnston believe that their concept has legs to become a nationwide chain. They are in negotiations to open two locations in the Tampa Bay area, with the first to open by February 2021. If their proof of concept goes well, then they would like to create a franchising model to open 500+ Oronzo stores nationwide.

“We view Oronzo as a tremendous growth vehicle for Front Burner,” Johnston said.