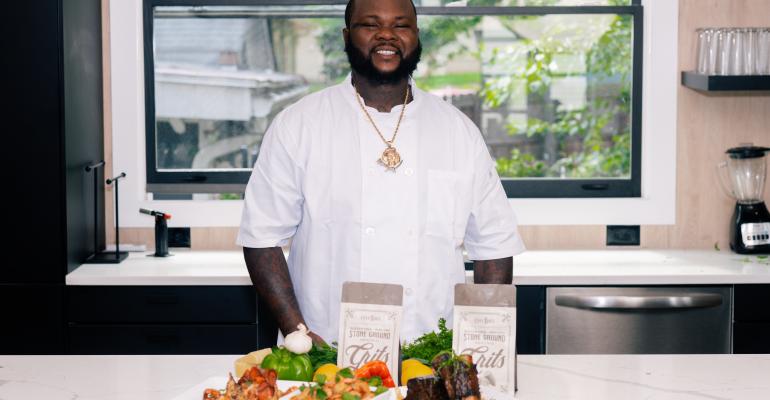 Chef Bryant Williams — better known as Chef Baul — worked as a private chef for nearly a decade, making meals for some of the music industry’s biggest stars. He traveled the world as Migos’ tour chef and cooked for entertainers like Kendrick Lamar, Gucci Mane and Lil Baby. Now, Williams is trading his private chef’s toque for that of a restaurateur, as he prepares to open two new restaurants in downtown Atlanta’s Five Points Plaza.

The first concept, Binky’s, is a nod to Williams’ father’s nickname. Located in a former sub shop, the 800-square-foot space will operate primarily as a to-go business, with four seats available for guests who want to dine in. The restaurant will operate for lunch and dinner, featuring dishes like salmon, lamb chops, grilled vegetables, fried chicken, fried fish, barbecue ribs, and mac and cheese. Williams hopes to open by the end of September or early October.

Williams’ second concept, Betty Sue’s is named after his grandmother, and it’s positioned just a few storefronts down from Binky’s in a former McDonald’s. The 1,400-square-foot restaurant will serve an all-day breakfast and brunch menu, with a focus on grits bowls topped with proteins like oxtail, lobster, and shrimp. Chef Baul’s Grits will form the base of these bowls, and is also available as a CPG product for customers to purchase both online and at the restaurant.

Williams began working in restaurants when he was 17, first bussing tables and then moving into the kitchen as a prep cook. Over the years, he learned as much as he could about cooking and the restaurant business before deciding to branch out on his own.

Williams — who describes his cuisine as Southern soul cooking mixed with Japanese, European and Caribbean flavors — posted some of his best dishes on Instagram, where his work was noticed by friends and neighbors. He began selling plates out of his house to customers including Atlanta-area rappers.

“They saw what the people were eating and wanted me to cook that for them,” said Williams. “The next thing I knew, I was on tour traveling the world with Migos.”

While he enjoyed his time as a personal chef, Williams opened his first restaurant in 2019 called Chef’d Up, a soul food restaurant in Atlanta. It was short-lived after a split with his investors, and closed during the pandemic. Williams said he’s excited for the chance to open Betty Sue’s and Binky’s on his own terms.

“With my restaurants, I get to share my food with the public like I used to,” said Williams. “It gives me joy to meet different people every day and have new people enjoy my food.”

Williams thinks about opening additional concepts, like a sandwich shop, or expanding Betty Sue’s and Binky’s to other locations in Georgia or even in Europe, particularly Paris and London. “Traveling out there, I noticed they didn’t have this type of food,” he said. “It’s hard to find good grits.”

But for now, he’s content to focus on his two upcoming restaurants in Atlanta and to get back to doing what he loves most: feeding his community.

“This is what makes me happy,” said Williams, “making food and serving the city where I was born.”