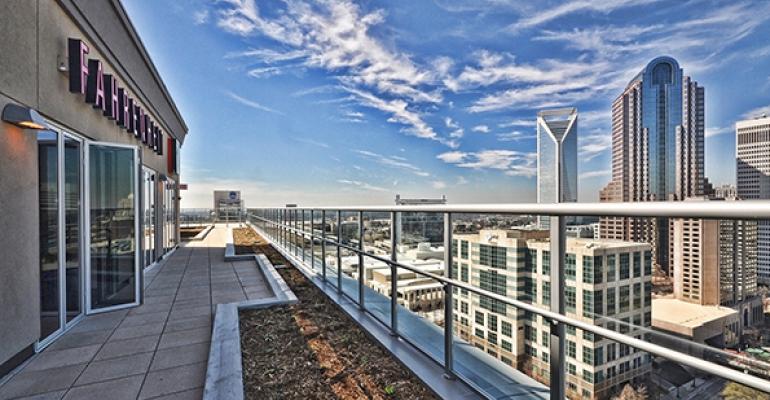 <p>Rocco Whalen&rsquo;s original Fahrenheit restaurant in Cleveland has its feet firmly planted in the ground. His new outpost in Charlotte, however, soars with a terrific view from the 21st floor of a downtown building complex.</p>
Trends>New Restaurant Concepts

Fahrenheit restaurant heats up the South

In 2002, a young chef triumphantly returned home to Cleveland after a five-year cooking stint at several of Wolfgang Puck’s West Coast restaurants. Back on the North Coast, 24-year-old Rocco Whalen mustered everything he learned from the master to open his own restaurant, Fahrenheit. His contemporary menu, with Mediterranean and Asian accents, was an instant hit with customers and the media, including this publication, which named him a Rising Star. Earlier this year, 12 years after opening his landmark restaurant, Whalen opened a second outpost of Fahrenheit, this time in Charlotte, NC.

The new restaurant is located on the 21st floor of the Skye Condominiums in downtown Charlotte. The mixed-use building includes 67 residential condos and a 172-room Hyatt Place Hotel. Fahrenheit is Charlotte’s only rooftop restaurant. The 8,600-square-foot space boasts a 360-degree view of the city from its perch. No matter where diners sit, they’ll have a view the dramatic skyline.

“The developers of this project (Small Brothers) are from Cleveland and they reached out to me and asked if I would take the Fahrenheit brand to Charlotte,” says Whalen. “After seeing the spectacular space, I knew it would be a tremendous growth opportunity that I couldn’t pass up. And the people of Charlotte couldn’t have been more welcoming.”

Whalen said he was also encouraged to take on the project because the city has many corporate-style restaurants like The Capital Grille and McCormick & Schmick’s, but not nearly enough chef-driven concepts. Sales at Fahrenheit suggest the population is hungry for independent restaurants. First-year projections for Fahrenheit were estimated at about $5 million, Whalen says, but the 200-seat
restaurant is on course to do sales north of $7 million. Not bad for a dinner-only restaurant. Fahrenheit also has an additional 60 seats in a private dining space.

When you stand at Fahrenheit’s sky bar, the focal point of the restaurant, you can see why it’s pulling in such big numbers. There is an inside and outside bar separated by glass doors. The roof area features the bar on a wrap-around patio along with two 15-foot fire pits, two linear fireplaces and an extensive herb garden that supplies the kitchen and bartenders. Also on the roof is a swimming pool for condo inhabitants and hotel guests.

Whalen, now 36, says he offers about 75 percent of the Cleveland menu in Charlotte. The other 25 percent reflects the bounty he collects from local purveyors. “The seafood I’m getting here is incredible,” he says. “The flounder and shrimp coming off Charlotte’s coast are as good as it gets.”

Whalen says he’s been spending about half his time in Charlotte and the other half in Cleveland. His executive chef in Charlotte is David Feinster, who worked with Whalen years ago during the Wolfgang Puck days. “Back then, during the ’90s, David was the only non-Asian guy working behind sushi bars,” says Whalen. “While we’re not doing sushi at Fahrenheit, I knew that because of David’s experience he would be able to work cleanly and efficiently and have the people skills to engage customers. With the beautiful seafood we have here in Charlotte, David is the right guy for the job.”

INTEC Group is behind Fahrenheit’s open-floor design, which features distressed wood tables, quartz columns and modern light fixtures. As guests step off the elevator on the 21st floor, they’re greeted with a spectacular ceiling mural of the Fahrenheit logo. The lounge area, bar, dining rooms and open kitchen all blend together.

A look at Fahrenheit’s menu clearly reveals the Asian influences Whalen picked up while working in Cali with Puck. With that said, the chef has made special efforts to tip his hat to southern favorites.

Whalen says he incorporates as much local, seasonal and sustainable products as possible. To that end, he has relationships with several local purveyors including Meat & Fish Co., Cloister Honey and Tega Hills Farm.

“I really believe in the city and I’m excited to put a food stamp on it,” says Whalen, who is a partner in the venture with his wife, Alexis. “We really just want to add to the cultural scene that’s going on here.”

In addition to the two Fahrenheits, Whalen also owns and operates Rosie & Rocco’s, foodservice outlets that pay homage to his late mother, at the Horseshoe Casino in downtown Cleveland and at Quicken Loans Arena, where the Cleveland Cavaliers play. He also operates another kiosk at First Energy Stadium, home of the Cleveland Browns.

Some may remember Whalen when in 2012 he starred in a Food Network documentary series, Fat Chef. It profiled him and other chefs who have struggled with their weight. He lost more than 100 pounds as a result of the show.

“Everything is going really well for me now,” says Whalen. “The expansion into Charlotte is just the latest chapter and I couldn’t be more excited.”