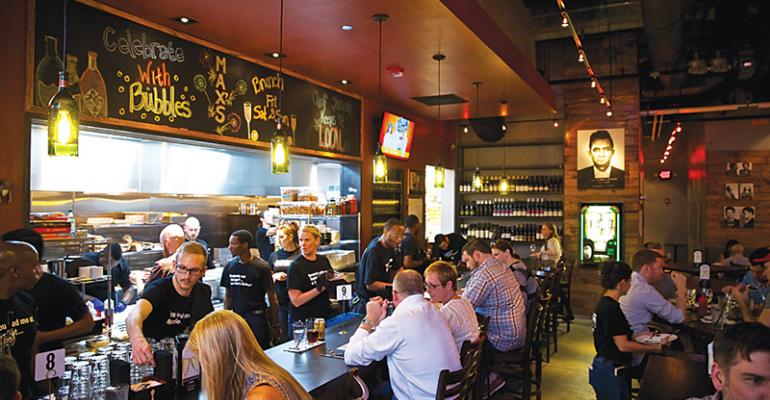 White tablecloths, sparkling silver and gleaming chandeliers are so yesterday. By now, Americans have seen it all, and they no longer want to get dressed up just to eat out. Hell, most of their meals are eaten in restaurants. What they want is great chow that they can eat in a funky, super-relaxed environment. What they want, at least some of the time, is to eat in a cool dive.

Every city has its favorite hole-in-the-wall hangout, an old place that’s as comfortable as your favorite pair of torn jeans. Some operators get lucky and find a beaten-up, worn-out place that can be converted into the perfect dive restaurant. Sometimes, it takes a little Hollywood design magic to create the perfect hole in the wall. It’s not easy making something look deliciously trashy, but drive-by-design has become an art form. Nevertheless, without decent grub, none of it matters.

As one blogger recently noted, “Anything goes in today’s scrappy food scene—as long as it delivers on food.”

In that spirit, there are scores of new, deliberately designed dive-y restaurants in old gas stations and warehouses, even shipping containers, that prove your menu needn’t be fancy, but it does have to excite.

Brooks Reitz of Leon’s Oyster Shop in Charleston, SC, says “Momofuku started it—fine dining and incredible food in a raucous casual environment. What I’ve seen—and this might change—is that right now, people want the same quality food they would have at a fine dining restaurant, but they don’t want it packaged with all the bells and whistles. They don’t mind concrete floors and rough environment. That doesn’t mean you can phone it in, but people appreciate great food in an atmosphere that is looser and more like home.”

A little U.S. history: In the 1930s and 1940s, waves of farmers fled the Great Plains dustbowl conditions and headed West to try their luck in California. Many of this ragtag group were given to raising honky-tonk hell in the rough roadhouses of Bakersfield that would eventually launch the careers of musicians like Merle Haggard and Buck Owens and the trademark “Bakersfield sound.”

The romance of the Bakersfield story inspired prolific Chicago restaurateur Paul Kahan’s (One Off Restaurants) Big Star concept—a self-proclaimed “bourbon and beer-focused, taco-slinging, late-night honky-tonk,” which he hammered out with Big Star’s chef de cuisine Tom Van Lente. A classic country and rock soundtrack and “rude décor,” as Kahan describes it, serve as a backdrop to Van Lente’s Mexican street food-inspired menu. It’s short and sweet, with about a dozen tacos (stuffed with intriguing ingredients from pork belly to mole-spiced carrots) and a couple of side dishes. On the drinks side, Big Star’s centerpiece is a single barrel bourbon menu. There’s a lot of tequila and mezcal, too—about three dozen varieties.

The tacqueria-meets-honky-tonk-roadhouse cultural mashup packs Millennials and hipsters into its cinderblock confines every night and all weekend long in what one reviewer called “a mosh pit of humanity.” Chicago Eater called it “the most critic-proof hangout in Chicago.” A walk-up carryout window helps the staff handle the taco-seeking overflow. “Bakersfield, in the late ’30s and early ’40s, was one of those unique moments in history where place, time, people, talent and opportunity all came together,” says Kahan. “It is in that spirit that we created Big Star.”

“Fried chicken and champagne? Why the hell not?” is the hook at Max’s Wine Dive, where a good and broad wine list is offered up with amped-up comfort food in a “down-to-earth, rock-n-roll style.”

For Houston-based, multi-concept operator Lasco Enterprises, Max’s casual accessibility has made the concept its first growth vehicle. Currently there are six units in Texas and one each in Atlanta and Denver.

The idea came from a neighborhood dive bar around the corner from the Manhattan apartment shared by Lasco founders Jerry and Laura Lasco a couple of decades back. The couple got attached to the hole-in-the-wall joint, with its reliable drinks, regular crowd and no-fuss food. After moving to Houston and opening several upmarket restaurants and wine bars, the Lascos still reminisced about that NYC dive with its shotgun bar and jukebox, which gave rise to the “wine dive” concept. “I liked the idea of juxtaposition and a more casual, completely different scene from a typical wine bar. What if we set it in a place we used to hang out with classic rock and Johnny Cash and buckets of beer, but added good wine and chef-driven food into the mix?” recalls Lasco.

Integral to the Max’s Wine Dive concept is a collection of wines on tap—a cost-saving method that allows Max’s to menu a bunch of wines at the $5 price point. The brand runs half-price wine promotions as well to drum up repeat business.

Food-wise, half the menu is rolled out among all the units, while a chef in each restaurant comes up with the other half. Best sellers include bison or fried chicken sliders served with homemade pickles. Other small plates include jicama ceviche tacos, lamb empanadas, “Nacho Mama’s Oysters”  (fried oysters on wonton chips), and pan borracho (“drunk bread,” a savory pudding made from torn sourdough baked in white wine custard with prosciutto, thyme and three cheeses).

Max’s, a “social experiment,” as Lasco calls it, has proved successful enough to double in size over the last decade, and the pace continues. “We expand when we feel like there’s an opportunity,” he says, many of which the Lascos find in abandoned buildings and past-their-prime shopping centers.

Still, he gets some flak for calling the newly built Max’s restaurants “dives.” “Dive is a mindset,” he says, “like our neighborhood bar, even if it’s a new buildout.”

The creators of Leon’s Poultry & Oyster Shop were aiming for fun, funky and downscale when they converted a Charleston, SC, auto body shop into a restaurant. Leon’s (the original name was kept in homage to the body shop’s owner) was conceived as a counterpoint to Charleston’s more illustrious and upscale French-influenced seafood restaurants.

Co-owner Brooks Reitz looked around his adopted hometown and saw “a glut of serious, high-aspiring restaurants,” he says. “I’d been here for six years and I had a grasp of what the dining community was looking for next: Something rugged where they could dress up for a date or go to straight off the beach.”

The intentionally ramshackle space has been described as “restrained flea-market chic” and “perfectly disheveled” with low ceilings, exposed roof beams, salvaged church benches and metal lawn chairs. A rough-hewn custom bar is the centerpiece of the small dining room.

Leon’s has been called a “working man’s” oyster bar. “Our [oyster] bars in Charleston are fancy. We (he and partner Tom Mink) were interested in a New Orleans experience, which is more working class. We said, ‘Let’s do an oyster bar, but make it approachable,’” says Reitz.

The idea of approachability also drove the addition of fried chicken to the menu. Who doesn’t love fried chicken? But Charleston already had lots of great fried chicken, so chef Ari Kolender played around with the idea, coming up with a brined version with a thin bread coating that binds to the skin and shatters when you bite into it. It sells like gangbusters.

“It’s different, and lighter than anything we have around here,” says Reitz.
The Leon’s menu helped Kolender earn a James Beard Rising Star Chef nomination earlier this year. “We do fried chicken, cheap beer and expensive champagne in a fun, casual environment,” says Reitz. “Leon’s has given us a clear sense of what folks in this town want.”

Next up: Oyster Shed, an event space in an even more rustic abandoned house behind the restaurant.

Olio is another chic dive located in a former service station. It’s in what was, until a recent revival, a down-and-out part of St. Louis—the Botanical Heights neighborhood. Ben Poremba and his Olio, and more upscale Elaia next door, were keys in the revival.

The neighborhood was a gamble when Poremba came across the spaces that would become his restaurants a few years ago. The opportunity to purchase the properties came along as Poremba was incubating an idea for a Middle Eastern and Mediterranean street food restaurant. The concept and the building had just the right synergy, says Poremba. “We wanted a place where we could create things people eat on the streets and share with each other, and was very casual.”

The space features a kitchenette (a prep kitchen is in the larger, attached Elaia), a bar and dining space. The building’s original, vintage garage door and windows were kept intact. The vintage elements play off of sleek marble countertops and modern furniture and fixtures. “Thinking about the flow was the hardest part [of the redesign] because, of course, it wasn’t designed as a restaurant,” says Poremba.

The menu starts with a raw/cured/smoked/marinated section that includes ceviche, Jamon Serrano and a smoked whitefish salad. Starters include a smoky eggplant dip with tahini, wheatberries, kefir and chives; and burrata with salsa verde on toasted ciabatta. Sandwiches include speck, gruyere and preserved lemons; and baby artichoke with ricotta, lemon, oregano and provolone.

Poremba calls the success of Olio a sign of the times. “Dining out isn’t a luxury anymore, it’s a necessity, so we make good, interesting food in casual setting. We kept it rustic, but people like it.”