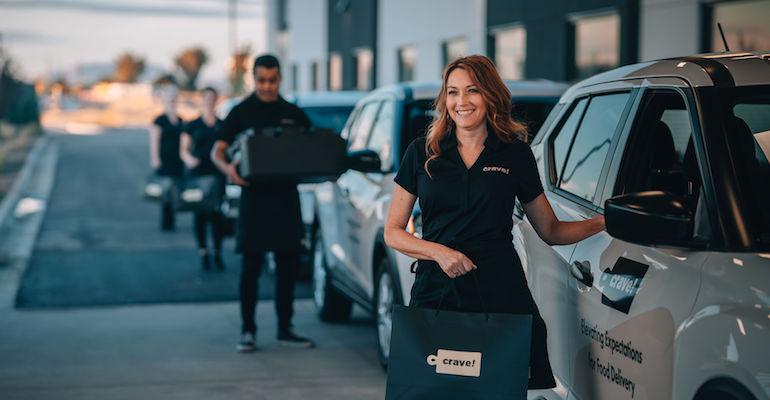 Crave Hospitality Group
The Crave Collective in Boise, Idaho, has its own fleet of delivery vehicles and "mobile servers."
Trends>New Restaurant Concepts

Crave Collective brings ghost kitchen with a twist to Idaho

With a growing number of Californians and others across the West Coast moving to towns like Boise, Idaho, Devin Wade saw an opportunity to bring them a taste of home with three restaurant brands by famed chef and restaurateur Michael Mina.

But Mina — who is bringing a spinoff of the International Smoke brand developed with Ayesha Curry, along with his concepts Tokyo Hot Chicken and StirFry to Boise — is not opening a restaurant there.

Crave is planning to open 15 of these collectives — featuring restaurant brands that vary by location — in cities across the country over the next two years, including four scheduled to open in 2021: two in the Salt Lake City area, and two near Dallas.

It’s a model that is very similar to ghost kitchens like Kitchen United and Cloud Kitchens, which have spread across the U.S., allowing restaurants to move their existing brands into new markets without opening a brick-and-mortar, and grow virtual concepts, for delivery only.

But Crave has some unique aspects. 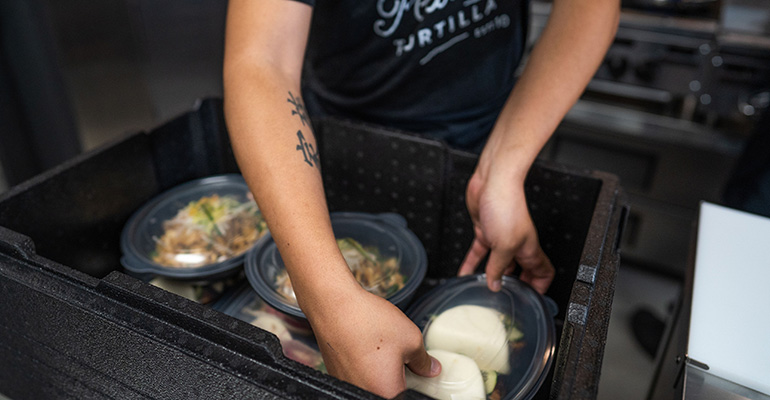 Crave is a 15,000-square-foot facility with 16 kitchen suites, each with customizable features suited to tenant/concept, such as pizza ovens or a wok station, for example. A conveyor belt runs through the center of the building to a central point where expediters collect and deploy orders for pickup or delivery.

The facility is served by proprietary technology that allows guests to order from multiple locations within the collective — a pizza from Tony Gemignani’s Tony G’s, for example, and a taco from Peached Tortilla — and the orders can be time to be expedited as one package and delivered by the collective’s own drivers in the group’s own vehicles.

Unlike most ghost kitchens, Wade said Crave does not use third-party delivery partners at all.

Instead, Crave has a fleet of delivery vehicles and a team of “mobile servers,” who are employees, paid about three times the local minimum wage, he said.

And it’s one order, one trip, added Wade, who developed the concept with restaurateurs Scott Howard, most recently chef of Citizen in Beverly Hills, Calif., along with Barry Werner, known for concepts like Tavern at Eagle Island in Boise.

“We wanted to design this from the restaurateur perspective,” said Wade. “So we asked what would they do if they could do delivery?”

The restaurateurs said they wanted more control of the delivery experience. No multiple stops, he said. “We actually recruit and hire for ‘server quality,’ rather than driver quality,” said Wade. Mobile teams even gather for a pre-dinner meeting, just as servers might in a restaurant.

“Mobile servers are knowledgeable about food, and can complement people on their order. They might suggest other items for next time,” he said. “We felt that was only possible from a W-2 employee standpoint. We can train them.”

Guests can also pick up orders from Crave Collective, and later Wade said there will be dine-in space added. Catering is also a big part of the model, he said, and the collective will have a dedicated concierge who can help tailor catering menus from any of the 16 concepts.

The restaurant partners rent the kitchen space, which in Boise is about $6,000 per month, plus a 22.5% fee on sales for brand-specific marketing, which includes delivery. Guests can order through a Crave app.

Among the concepts coming to Crave in Boise are:

Wade is also co-founder of the venture capital firm StageDotO, which has raised $6.5 million in series A funding for the project. Real estate firm Capital Eleven has also committed support for the first 15 Crave locations.