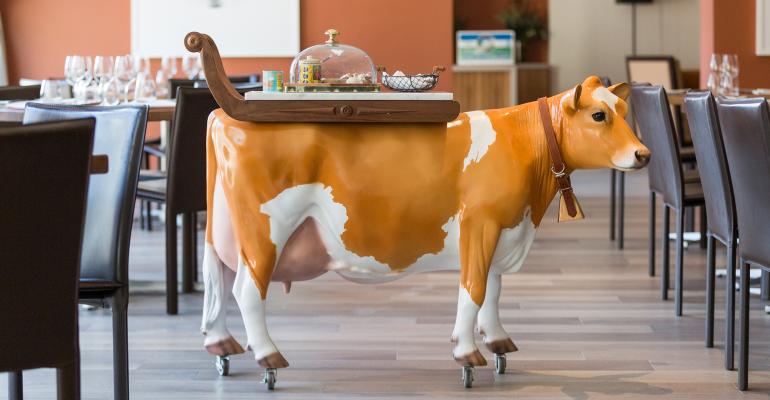 From chefs making rounds in the dining room to a cow cart that goes “moo,” The Restaurant at CIA Copia in downtown Napa Valley, Calif., aims to make meals more memorable with an inventive spin on service.

“Innovation is at the heart of the restaurant,” executive chef Christophe Gerard says. “Copia brings the world-premiere culinary college to life.”

The restaurant, which opened in January, offers locals and visitors to the region an opportunity to enjoy market-based and globally inspired California cuisine, as well as Napa Valley wines and craft cocktails. In a unique fusion of front-of-house and back-of-house, chefs create a variety of dishes in the kitchen and then bring them out dim-sum-style on trays or plates for diners to choose from and share.

“People have the option to be adventurous,” Gerard says. “It’s a fun concept.”

Included among the recent savory and shareable dishes paraded around the dining room are Rainbow Trout with Pistachio, Sage Butter; Chickpea “Truffles” and House-made Burrata; and Roasted Chelsea Gem Oysters with Verjus.

Diners can also order directly off of the restaurant’s menu, if they prefer.

The innovative service model offers diners not only a chance to see every dish before ordering, but also affords them the opportunity to meet with and hear from the chefs who made them. In addition, the chefs get a chance to step off the line and engage with diners to better understand their needs.

Gerard has also introduced another tableside innovation: A cow-shaped cheese cart. Servers wheel Bessie, as the cart is affectionately called, around to offer diners three different cheeses, served with fresh baguette slices and seasonal marmalade. For added whimsy, servers make Bessie appear to moo by tipping over a hand-held noisemaker. For now the cheeses and their accompaniments are presented to diners on a wooden board, but eventually the cart will hold whole cheeses that will be cut to order tableside.

When asked why he’s bringing chefs out of the kitchen and wheeling around a cow-shaped cheese cart, Gerard responded: “Why not?”

“We wanted to do something different,” he says. “It’s still a work in progress.”