Coffee gets the cocktail treatment 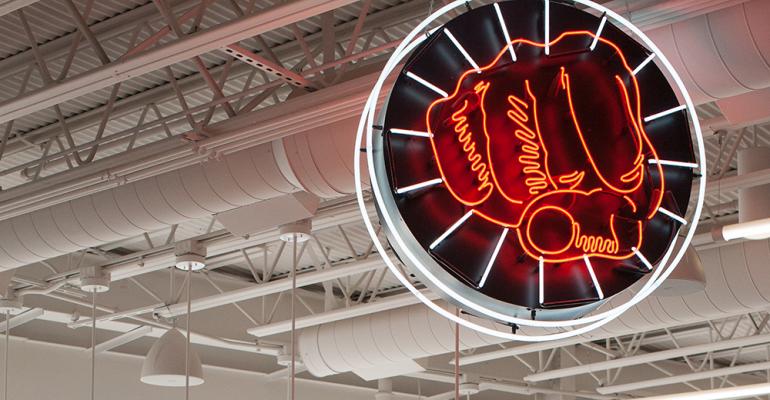 But rather than alcohol, these beverages are made with ingredients like three-day infused coffee, or tea made with ceremonial matcha, and flavored with things like coconut puree, fish sauce or dehydrated peanut butter.

“It doesn’t have the same menu as most third-wave coffee concepts. It’s more cheffy and cocktail style, and it’s focused on cold coffee, not hot,” said Fleischman.

Fleischman founded and later sold the Umami Burger chain. In 2014, he launched AdVantage Restaurant Partners LLC which went on to open various new concepts including Chop Daddy’s, which he later sold, as well as PBJ and the now-closed ChocoChicken — though Fleischman said he plans to bring the fast-casual ChocoChicken back at some point.

Fleischman and partner Jeffrey Merrihue  — founder of a network of “local food experts” called XtremeFoodies — opened Cold Cocked Coffee in the Platform 35 food hall in Los Angeles’ Koreatown. It’s a concept Fleischman said they designed to multiply and the partners are working on international franchising.

Most drinks are $5 though a few more traditional drinks come in at $4.

Cold Cocked also offers gelato in the form of a traditional affogato or matcha affogado, as well as artisanal pastries, all priced at $5. In addition, grilled cheese is always on the menu, featuring fontina, gorgonzola, parmesan, and truffles, priced at $10.

In addition to the drinks and food, the menu boasts supplements that can be added to drinks at $4 each and aid with energy, relaxation, or sleep. A bottled energy drink is also in development.

Coming in November: Fleishman and Merrihue plan to open the new Heroic Deli and Heroic Wine Bar next door, both in about 2,800-square feet in Santa Monica.

The deli will serve breakfast and lunch, including “reinvented deli sandwiches” with less bread and higher-quality imported meats and cheeses, Fleischman said. The wine bar will focus on Italian dishes at dinner.

Read on to see some of the drinks being brewed at Cold Cocked Coffee.