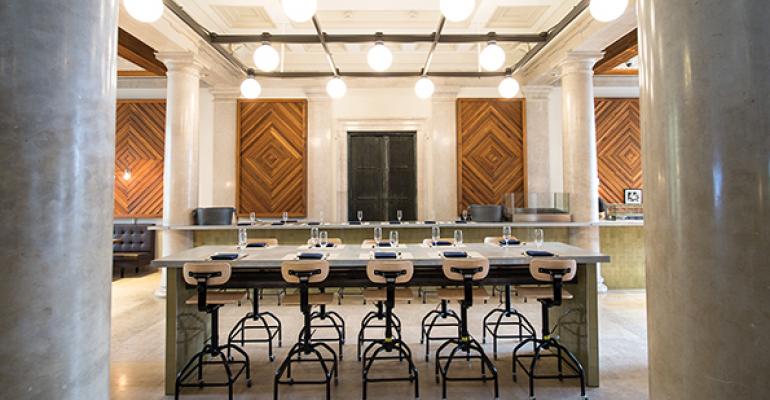 After disappearing from the restaurant scene years ago, Chris Cannon is back with a dynamic multiconcept project that occupies a New Jersey mansion.

It's been a while since we’ve heard from restaurateur Chris Cannon. After a few years away from the restaurant game, he surfaced in January as a consultant for a Venetian concept called All’Onda in NY’s Greenwich Village. What guidance he offered worked. The critics have been impressed. Then, several weeks back, Cannon opened his first solo project in years—four distinct restaurants in a grand historic mansion. Jockey Hollow Bar & Kitchen in Morristown, NJ, signals his return to top form.

For those who keep score, Cannon joined forces with celebrity chef Michael White in 2007. Their company, The Altamarea Group, created seven renowned Italian restaurants in Manhattan and New Jersey. However, an acrimonious break-up in 2011 left Cannon with only two of the restaurants, Alto and Convivio, both of which had received three stars from the New York Times. White and a third partner got the rest. They have continued to grow the company, which landed on RH’s list of the Top 25 Coolest Multi-Concept Companies (see the September issue). Cannon and his two restaurants, on the other hand, lost steam and he eventually closed both, retreating to his home in Mountain Lakes, NJ. Nevertheless, reports of his demise in the restaurant business were greatly exaggerated.

Jockey Hollow is his answer to any doubters. The mansion, which had sat empty for years, is the former home of AT&T’s first president, Theodore N. Vail, and it’s a palazzo-style eye-popper, like something you’d admire from afar in Tuscany. Built in 1917, the former home-turned-restaurant sits on South Street, near the Mayo Performing Arts Center, a ready  source of potential customers. Jockey Hollow has four restaurant spaces, each maintaining the integrity of the historic structure, despite numerous modern and whimsical updates.

Before entering the 15,000-square-foot space, one must pass a long, narrow reflecting pool edged with urns. There’s something very Renaissance about it all. As dramatic as that is, once you pass through the entrance you’re faced with a grandiose Italian marble staircase and massive marble columns. Their formality is intimidating until you quickly spot a striking sculpture of a floating spaceman, which juts out of a wall. It’s one of several modern art pieces successfully designed to lighten the mood.  For this particular art installation, one can’t help but think the lost-in-space symbolism references Cannon’s years away from the restaurant scene.

“The spaceman is the first thing people see when they walk into the building,” says Cannon. “Any expectations they had that the place is going to be stuffy immediately disappear and they realize they’re going to have fun.”

There’s little doubt customers will have fun when they move left of the staircase to Vail Bar, a masculine cocktail lounge featuring an 18-seat dark teak bar and a 100-year-old fireplace. Here you’ll find another clash of time and space while peering into a modern video art piece above the fireplace. A famous Russian artist is behind the installation. Along with the trippy video are televisions above the bar, where customers can watch sports while mixologist Christopher James produces a long list of hand-crafted cocktails.

To the right of the grand staircase is The Oyster & Wine Bar, a casual space that offers a contemporary menu of oysters on the half shell, shellfish, cheese boards, appetizers and entrees. Many of the oysters come from the Forty North Oyster Farm in nearby Mantoloking. A standout appetizer on the menu is Scrambled Hen Egg with Black Truffle, Lardo and Country Bread. A signature entrée is the Sicilian-Style Roast Chicken with Citrus Peperoncino, Confit Leg and Lacinato Kale.

'Everyone is a star'

Downstairs, below the grand staircase is The Rathskeller, an industrial lounge with exposed brick walls and steel tables. It also doubles as a setting for private dining and an event space for up to 90. A glass wall separates the seating area from a wine room, a keg room and a room designed for making and storing sausages and hams. Sausage and beer highlight the menu here.

On the floor above the massive staircase is the fine dining restaurant—The Dining Room at Jockey Hollow. At the top of the staircase are two symmetrical modern art paintings.The Dining Room is spread out across the entire space and features a farm-to-table American and Italian menu created by executive chef Kevin Sippel, who formerly worked with Cannon at Alto and helped achieve its three-star review. His four-course, prix-fixe menu is made up of dishes from land and sea, all locally sourced. Sippel and his team work in a glass-enclosed kitchen that allows guests to watch. It’s a modern touch in an old sitting-room space that features wainscoting and fireplaces. At press time, the more formal dining room had not yet opened and the menu was still in development.

The cost to make all these updates to the mansion totaled $5 million, which includes legal and other start-up expenses. Compared to doing a similar project in New York, that’s a mere pittance. “At Marea (one of the restaurants he operated with White), we were paying $8,000 per seat per year,” says Cannon. “Here in New Jersey in this beautiful space, we’re paying $850 per seat per year.” That amounts to about $20,000 a month in rent, he says, pointing out that fee is about what a pizzeria would pay in a low-rent district in Manhattan. Jockey Hollow, on the other hand, is a magnificent space with 300 total seats and 120 employees.

Because operating costs are so low, Cannon explains, he doesn’t have to fret if a customer comes in and orders only a burger and a beer. “When you’re paying $8,000 per seat, there’s a lot of pressure on you to sell bottles of wine for $120 and drive up check averages. Here at Jockey Hollow, a customer can order a $50 bottle of wine and another for $35, both of them very good, and really enjoy themselves.” Jockey Hollow, he adds, has 50 wines under $50 on its list.

Cannon is happy to be away from the madness of New York City rents and all the celebrity chef drama that he and many higher-end restaurants experience. At Jockey Hollow, despite having a highly skilled chef, there is far less focus on the celebrity part of the business and more on everyone working together to make customers happy.

“I’m so happy to be working with Kevin (Sippel) because he loves what he’s doing and it’s not about egos,” says Cannon. “Everyone here at Jockey Hollow is a star.”

Be that as it may, Cannon is clearly the star of this illustrious production. In reviving the mansion, he has aslo revived his career and his ability to shine brightly again.