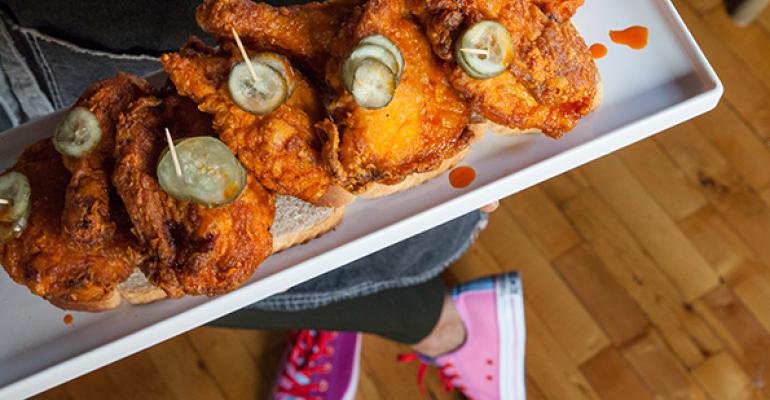 The concept is called Carla Hall’s Southern Kitchen and the restaurant will focus on the “hot chicken” of her Nashville, Tenn., hometown, which is marinated in pickle brine–not buttermilk–rolled in seasoned flour, then pressure fried. Once cooked, the chicken is doused with a chili oil-based sauce, which amps up the spice level.

Evan Darnell, Hall’s business partner and the concept’s president, describes their restaurant as a more contemporary fast-casual version of a neighborhood chicken joint. Guests will order and pay at the counter, but their food will be run to the tables.

“We think this is unique in the fried chicken space because it’s Nashville hot chicken, and there’s no one really doing that now, at least in New York,” says Darnell.

A variation of the concept opened in late September at the Barclays Center in Brooklyn in partnership with Chicago-based foodservice contractor Levy Restaurants. That quick-service outlet only serves a modified menu of chicken sandwiches and chicken tenders with dipping sauces. Only open a few weeks, so far sales have already tripled Levy’s original projections, Darnell said.

But the location in Brooklyn’s Columbia Waterfront District will be the first complete iteration of Carla Hall’s Southern Kitchen. It will also be the first restaurant for Hall, who got her start working in restaurants around the Washington, D.C. area before launching a catering company there in 2001. In 2008, she landed a spot on Bravo’s “Top Chef,” which launched a TV career that led to her current co-host role on ABC’s lifestyle show “The Chew,” now in its fifth season.

Known for her high-energy personality and “Hootie Hoo” catch phrase, Hall hopes to “serve up some authentic Nashville love” in New York City, according to her press materials.

The menu is inspired by the Southern Sunday suppers of her youth. Guests can order fried chicken by the piece, tenders or a half-a-bird, and all come with the obligatory sliced pickles.

For the chicken, the level of spiciness can be customized from mild, or no chili sauce, to fiery hot with several variations in between. The chicken comes cradled on a slice of white bread that serves as a sponge for the chili oil.

Sides will also be a unique aspect, says Darnell.

To be ordered individually or in family-style large batches, sides include the traditional Southern options of collard greens, macaroni and cheese, black-eyed peas, potato salad, coleslaw and more. Unlike in much of the South, vegetables will be made without added animal fat.

“They’ll all be vegetarian,” says Darnell. “Carla doesn’t like to put fat in just to throw it in there. Our collard greens get smoke from smoked paprika, for example, rather than a ham hock.”

Seasonal variations will also appear, like a creamed corn in summer and early fall or green beans and new potatoes in spring.

There’s skillet corn bread and buttermilk biscuits, and, for brunch, chicken and waffles.

Hall owns the Carla Hall Petite Cookies company, and her cookies are an option for dessert, along with banana pudding, cobbler, red velvet whoopie pie and chess pie, as well as soft-serve buttermilk ice cream.

Beverages will include sweet tea and lemonade as well as sodas “imported” from Nashville. Down the road, Darnell says they plan to offer Tennessee beers and wine, as well as pre-batched cocktails.

Borrowing from Cracker Barrel, the restaurant will have an adjacent retail component called Freddie Mae’s Provisions–named for Hall’s grandmother–that will feature curated foodstuffs, pickles and other goods from Tennessee, like Goo Goo Clusters and Moon Pies, cookbooks and other retail products.

“The plan is to find the right investor that shares a common goal,” says Darnell. “We’re hoping we do well in Brooklyn and someone gets interested in it and helps with growing it.”