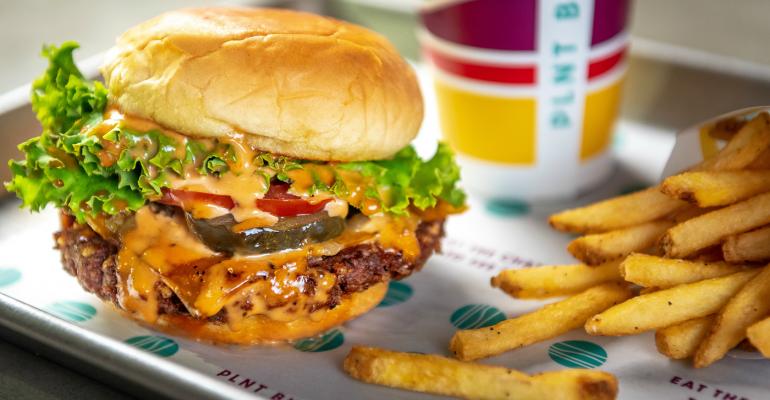 As the ubiquity of Impossible Burger and Beyond Burger raises the profile of plant-based diets across the food industry, vegan burger restaurants have become one of the hottest new restaurant concepts for restaurateurs to tackle. Food Network star Spike Mendelsohn — known for decidedly-non vegan, Washington, D.C.-based burger franchise Good Stuff Eatery — is joining the plant-based burger trend with the opening of fast-casual kiosk, PLNT Burger in Silver Spring, Maryland on Sep. 12.

PLNT is opening inside a Whole Foods in collaboration with head of operations Ben Kaplan and director of strategic marketing, Jonah Goldman. The in-store kiosk will offer vegan versions of cheeseburgers, classic burgers, and bacon BBQ burgers with bacon made from mushrooms, along with oat-based soft serve and sides of fries.

“PLNT is a clever name because it opens up a conversation about blending these different values of ours, depending on how you read the name as plant, plenty, planet, etc.” Jonah Goldman said. “It’s really to impress upon the consumer that this is not only something positive you’re doing for your body; it’s about creating a habitable world […] We can enjoy the classic meals we crave in a way that does not deplete environment. We can create a food system that is prosperous and regenerative in nature.” 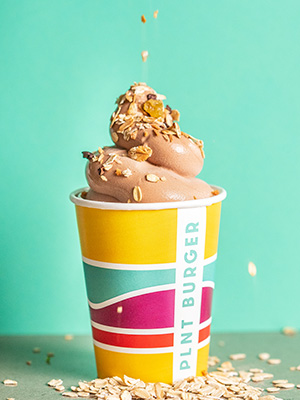 Beyond Meat is the main “meat” supplier for PLNT, and chef Mendelsohn has been working with the company for years:

“I’ve always loved burgers but when I married my wife, who is vegan, I’ve been introduced to that world and over the years I’ve tried to create a great vegan burger recipe with a lot of misses along the way,” Mendelsohn said. “A few years back I ran into Seth [Goldman, founder of Beyond Meat] at a panel and he slid a cooler of Beyond Burgers under my chair. I took them home and was blown away.”

But is he worried about standing out in an increasingly crowded landscape of vegan burger joints?

“In the world of meat-based burgers, the competition has always been stiff,” Mendelsohn said. “What we are experiencing right now is a huge universal shift in how we look at food. […] We are really a chef-driven concept, and I think that’s what makes us stand out.”

Other suppliers include Washington, D.C.-based Dolcezza Gelato — which will provide the exclusive plant-based soft serve recipe — and Honest Tea, which is supplying teas and lemonades for the drink menu. Price points will range from $5.50 to $7.25 for a burger or $12 for a “PLNT meal,” which comes with a burger, fries and a drink.

There are no expansion plans set in motion yet for PLNT, but Goldman said that he “strongly believes” that PLNT is a mass-market concept — “not at a Shake Shack level, but perhaps at a more localized In-N-Out level.”