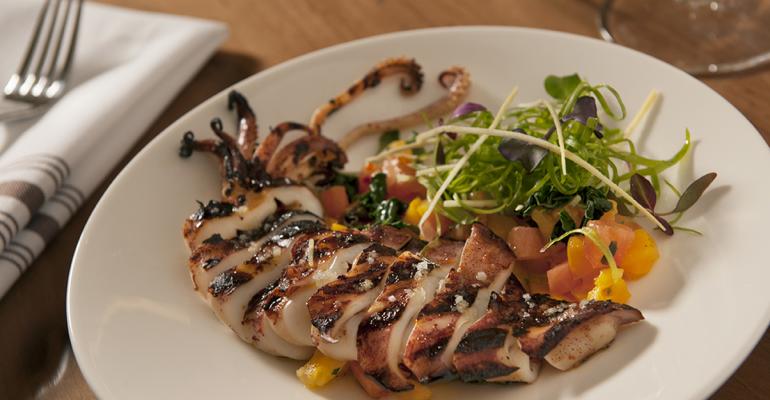 The menu at Canon Club, a polished seafood restaurant that opened in Beverly Hills, CA, in October, spotlights fresh fish and shellfish and then gets out of the way.

Entrees are designed to be shareable small plates. Spanish octopus is grilled and tossed with kale and pickled Fresno chilis in an Italian salmoriglio sauce made with capers, honey, anchovies, herbs and Portuguese olive oil.

Sides include whatever’s fresh and in season from the farmer’s market, like grilled broccolini with crispy garlic, lemon and harissa aioli; or a beet salad with avocado, pecans and Drake’s Farm goat cheese.

The dessert menu is kept simple: a lemon tart, a chocolate mousse cake and a flan made from goat’s milk.

Canon Club is owned by father-and-son team Albert and Amir Ahobim, as their first restaurant venture. Albert, the father, previously operated food markets in San Francisco and a wine store in Beverly Hills.

In the kitchen as chef de cuisine is Edy Lucas, an L.A. native who previously cooked with chef David Lefevre at Fishing With Dynamite in nearby Manhattan Beach, as well as Neal Fraser at The Strand House.

Lucas’s mother is from Guatemala (the flan is her recipe) and his father from Spain. He graduated with a degree in finance and didn’t go to culinary school. Instead, he staged in top kitchens, including Daniel in NYC, Providence in L.A. and Atelier Crenn in San Francisco.

His Beverly Hills audience is used to Italian food, so Lucas fears it may take time to get them used to the bolder flavors on the menu, as well as the fact that the restaurant doesn’t put out the starter basket of bread with drinks.

“People get full before the actual meal comes,” he said. “At the end of the day, you want the fish to be the star of the dish, not the pasta or starch that gets you full.”