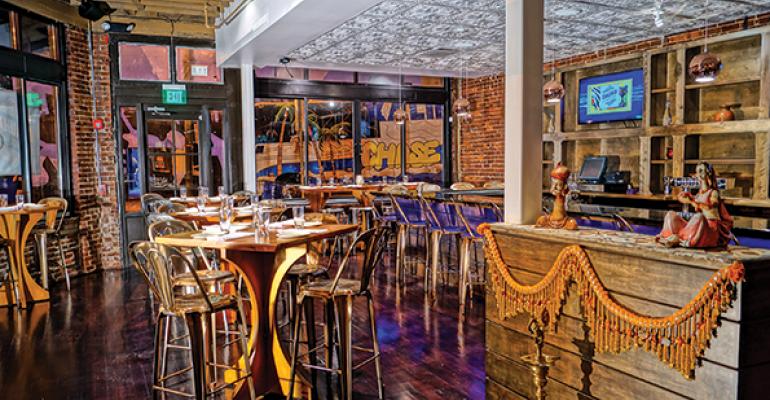 Here's a game plan the next time you’re in Nashville and you want to get your hillbilly on: First, hit the Ryman auditorium and check out Ronnie Milsap; then head to Fanny’s House of Music and pick up a handmade ukulele; mosey over to Katy K’s for a vintage pair of cowboy boots and, finally, order a cold beer and Hot Chicken Pakoras at Chauhan Ale & Masala House.

What, you say? Okay, Chauhan isn’t currently a stop on the tours of Nashville’s famous haunts, but if its celebrity chef owner has her say, it may soon be. While most people don’t think of eating Indian food when visiting Nashville, the recently opened Chauhan Ale & Masala House isn’t your typical Indian restaurant. For that you can thank Maneet Chauhan, whom you’ve likely seen judging on the Food Network’s competitive cooking show, Chopped. She’s teamed with North Gulch Hospitality, the folks behind Anthem/Revelry, a restaurant and music venue that sits next door to  Chauhan. The Indian restaurant has taken over space once occupied by Rooster’s Bar-B-Que.

“My decision to open my first restaurant in Nashville was born from my heart. From the moment I stepped foot in Music City, I have had a love affair with the people and burgeoning culinary scene,” says Chauhan, a graduate of the Culinary Institute of America. “The city’s long, highly respected cultural history, coupled with the recent growth and development, is inspiring. I could not be happier with my decisions and I’m truly excited to call Nashville my home.”

Before millions of Chopped fans laid eyes on Chauhan, she made a big name for herself at Vermilion, a contemporary Chicago restaurant where she brilliantly blended Indian and Latin American cuisines as its executive chef. Both Chicago magazine and Travel & Leisure named Vermilion a best new restaurant. She’s not taking the same approach at Ale & Masala House, but is instead positioning it as an Indian gastropub. This time around Chauhan, who has her own cookbook, Flavors of My World, is blending her Indian heritage with a Southern sensibility.

At the new restaurant, which opened in November, she’s giving down-home Southern classics a unique Indian twist, such as Guava-Glazed BBQ Ribs served with fingerling potatoes and sautéed collard greens. Another Southern menu riff is Blacked-Eyed Peas Tikki, a pea and sweet pepper croquette served with cucumber raita. The aforementioned Hot Chicken Pakoras consists of crispy chicken made with a spicy house-blend mix and mango-mint.

Chauhan, who has her own signature spice line, is also playing off the much-loved Southern concept of meat-and-three by offering an Indian version that is served in Indian tiffin (metal containers) with five proteins ranging from chicken to lamb to vegetables, along with a choice of accompanying sauces, and six side selections.

In addition to a tip of the hat to Southern favorites, Chauhan, along with her chef de cuisine—Vasisht Ramasubramanian—is preparing modern interpretations of authentic Indian cuisine designed to transport diners to a bustling street in Punjab. Chauhan was born and raised in the Punjab province of India and cooked in several luxury hotels in the country before moving to the United States.

Her updates of classic menu items at Chauhan include Mussels Tikka Masala served with a tomato and fenugreek sauce and garlic-cilantro nan; Gol Guppa Shots, a traditional Indian street food made with semolina puffs, black garbanzo beans, potato and mint-cilantro water; and Melai Methi Curry Catch of the Day with cauliflower puree, roasted butternut squash and pickled red onions. For the less adventurous, a section of the menu will be devoted strictly to kebabs and breads such as Classic Chicken Kebab served with a mint chutney.

To complement her robust Indian flavors, Chauhan has created, in conjunction with Cool Springs Brewery, a selection of Indian spice-infused beers that will change seasonally, including Mango Mint Lager and Saffron-Cardamom Ale. Of course, there’s an expansive selection of Indian beers.

As for the actual restaurant, Chauhan Ale & Masala House is located in a historic shotgun-style building dating back to the 1920s. It’s designed to evoke the essence of a sleek English gastro pub. Natural furnishings and textures, including original heart pine wood flooring and wood framing, are enhanced by splashes of Indian-inspired color.

An original working red brick fireplace is a focal point surrounded by antique frames and mirrors. For a modern touch, LED lasers project subtle graphics on an exposed brick wall.

In addition to the main dining room, there’s a cozy pub area featuring a vintage tin ceiling and a granite bar. Low-slung couches and chairs rest upon large ornate Indian rugs, while traditional Indian tabletop games serve as a replacement for traditional coffee tables. Indian basket-inspired lights above offer a warm glow to the casual space. In all, the entire restaurant can seat up to 150 guests.

Despite its focus on music, Nashville has evolved into quite a culinary attraction in recent years with the addition of numerous top-notch restaurants. The entrance of a world-class Indian restaurant, particularly from a celebrity chef like Chauhan, has demonstrated how much of a culinary powerhouse the city is becoming. Sure you can get your hillbilly on in Nashville, but now you can also add some Indian spice to your country crawl.