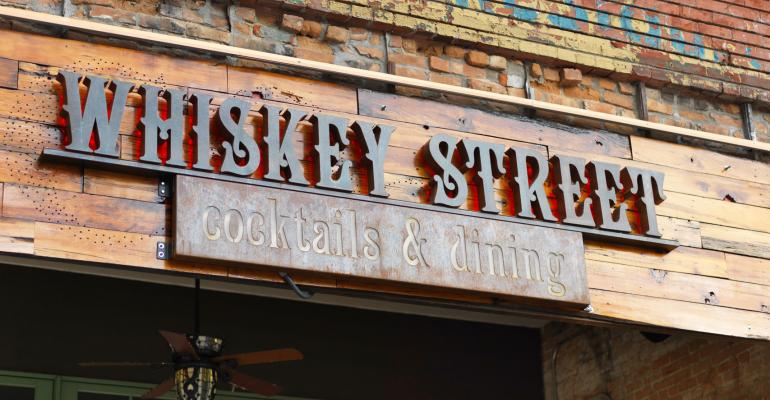 When the whiskey isn't flowing in your hometown, it's time to make it rain. Or at least, that's what Bourbon Group co-founder Jason LeCates did in Salt Lake City, Utah.

Not literally rain of course, but LeCates did bring the largest selection of the brown spirit to Salt Lake City when he opened Bourbon House in 2011. Then he brought more when he opened Whiskey Street in 2013, followed by White Horse in 2017.

The idea behind Bourbon Group came while LeCates worked for alcohol distributor Southern Glazer’s Wine and Spirits. When he traveled to Seattle for management meetings he would explore the food and beverage scene, marveling at the downright beautiful and brimful bars many places offered. So when his high school friend Trace Hegemann approached him about opening a bar in downtown Salt Lake, LeCates left his job and took the plunge.

The pair built out the 120-seat Bourbon House with a focus on the back bar and bottle program. But when it was time to open they found getting a liquor license in Utah wasn't easy. Serendipity struck, and one of LeCates former bosses, John Prince, had closed his bar but still had the coveted liquor license.

"We just started talking and he said he had a liquor license without a bar and I had a bar a without a license," said LeCates. "We opened Bourbon House together and it was an overnight success."

LeCates credits the prosperity of the business to a combination of the bar's aesthetics and opening on the cutting edge of the whiskey boom. Bourbon House proved such a hit, the trio went on to open Whiskey Street two years later, which features more than 500 whiskies. That’s when chef Matt Crandall came in, who is now the executive chef and the director of operations for the group, as well the fourth partner.

"Pulling Matt in at Whiskey Street, that was a key. Having an excellent chef put us over the top," LeCates said. "We were pretty much the first bar in Salt Lake City to focus on the food as much as the beverages."

The large, 230-seat Whiskey Street serves innovative American food. That includes  house-smoked meats, pork belly lettuce wraps with kimchi, bourbon-laced bacon popcorn with caramel, bourbon-Coke meat loaf and short rib grilled cheese sandwiches. Entrees range between $22 and $34. At Bourbon House the menu features appetizers like deviled eggs and fried cheese curds, four types of burgers, and steak frites, all in the $14 to $25 range. White Horse, which has a maximum occupancy of 190, does more with seafood and plates of steak tartare, house-made charcuterie, and roasted duck with Utah cherries. Entrées run between $20 and $34.

While having a great food and beverage program bodes well in many communities, in Utah things are a bit different. For starters, none of the Bourbon Group's venues can allow anyone under the age of 21 to dine. That's because the restaurants are technically licensed as bars.

"If you are a restaurant you can't buy booze without ordering food, but at a bar you can have a drink without food, but no kids," LeCates explained. Plus, at a restaurant alcohol can’t be more than 30% of total sales, he said.

For a whiskey-focused place, that' almost impossible. Some of the spirits, such as local distillery High West Rendezvous Rye which is finished in Malbec barrels is $40 a dram; and it's $200 for a shot of Laphroaig 28. The signature Whiskey Burger, on the other hand, runs $15.

"We have weird liquor laws and enforcements because the [Mormon] church is so dominant," LeCates said. "But at the end of the day they mainly don't want you to serve children or people to the point where they are so drunk they harm themselves or someone else."

Bringing unique and quality whiskey and solid food isn't the only thing the Bourbon Group is doing for Salt Lake City. The team has also had a hand in revitalizing areas that have long been ignored. Whiskey Street opened on a rundown street that only housed five establishments. Now, LeCates said there are about 17.

"When we leased Whiskey Street out, Main Street was pretty depressed," he said. "We were the first group to come in and grab a dilapidated building [complete with pigeons] and give the area a shot again."

Four years after launching Whiskey Street the group opened White Horse next door. The idea, said LeCates, was to keep competition from moving in.  He said White Horse is now the best place to eat in the city. Crandall has created an American brasserie menu featuring house-made bacon, pastrami, pickles and pasta. He also flies in oyster directly from Taylor Shellfish, Island Creek, Hama Hama and Hog Island oyster companies, and sources wagyu beef and kurobuta pork from Snake River Farms out of Idaho.

Now the Bourbon Group is onto another area and opening Franklin Avenue this month. The new venue also in a downtrodden spot, or more of an alleyway, LeCates said, that used to house brothels. The actual bar is inside the short-lived Franklin Avenue Variety Theatre, which was built around 1891.

"We are hoping to revitalize the street,  and the building we are in was an old theater that was pretty sketchy," he said. "The city hasn't given attention to this area and we will be the first nice restaurant on the street, it should be pretty cool."

Franklin Avenue is slotted to open June 14. As for future projects, LeCates said he is happy with what the Bourbon Group has, for now.