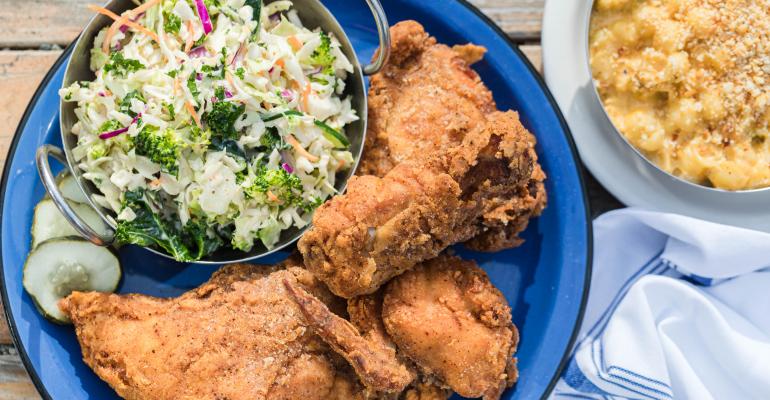 Even before the pandemic solidified fried chicken’s place in Denver's fast-casual dining scene, Query had a finger in the business with The Post Chicken & Beer, a concept with four Colorado locations in Lafayette, Longmont, Boulder and South Denver.

But during the pandemic shut down, which in Colorado began March 16, 2020, and lasted until May 24, 2020 (with a lot of restrictions), he found just how much fried chicken resonated with the public.

For Big Red F, the fried chicken business grew. Now the company has seven locations of The Post, and the latest took over another Big Red F establishment, Lola Coastal Mexican. While Lola offered Denver a unique brand of upscale, fish-centric Mexican food and was a key spot in the busy neighborhood of LoHi, the team found it didn't translate well to takeout. So Query and his partners, who also own Jax Fish House & Oyster Bar, Centro Mexican Kitchen and West End Tavern, made the choice to close the spot in September 2021, and let his fried chicken concept take over.

"In Denver and Colorado, the food game, as someone who has been in it, [has] taken not just steps but big bounds forward," said Query, who added he noticed during the height of COVID people hunkered down and learned not just to cook for themselves, but how to taste wine and how things like bourbon and cheese are made. "The diner has elevated and become more sophisticated, more knowledgeable and it's not just someone saying, 'I'm a foodie.' It's raised the stakes for a restaurant operator."

Overseen by chef Brett Smith, The Post’s LoHi unit is a 150-seat restaurant that works well in the space and for the area. Here, on the menu are six kinds of salads, fried chicken on the bone, fried chicken sandwiches, green chili macaroni and cheese, buttermilk waffles, cheddar biscuits, collard greens and so much more. Entrees run between $14 to $17, and appetizers around $10. The Post is open for lunch, dinner and weekend brunch.

The drink program proves strong too, with The Post's own craft beers at the crux of the beverage menu. Think cans of crisp Howdy pilsner, Townie IPA and Ski Town red lager, all made by Post Brewery. Diners can also get a solid margarita, sangria and boozy slushies.

When rebranding the space, Query wanted to make sure the fried chicken to-go aspect remained in the forefront. With that in mind, they designed a takeout window to make getting meals quick and with little contact. Fried chicken, after all, said Query, holds up brilliantly when packaged and taken home. It's good hot, lukewarm and even refrigerator cold.

The Post's gluten-free aspect appeals, as well. It's tasty for everyone, and just about everyone can eat it, he said.

"Ours happens to be, after we tried a bunch of different breading, gluten free, which is appealing to diners who haven't had fried chicken in 20 years," said Query. "They can safely know what we are doing won't make them sick."

The price point works too, since The Post also doesn't have the ingredient overhead of Big Red F's other popular spot, Jax Fish House. There, freshly-shucked oysters are king, though the menu also includes Maine lobster, Norwegian salmon, Alaskan snow crab and more.

With an average two-person check hitting closer to $100, the food is more expensive at Jax, but so is the overhead. All the seafood comes in fresh from coastal cities and the shelf life proves short. Chicken, on the other hand — even the humanely-raised birds the company sources — can be found nearby and stays fresh longer.

While it may be cheaper to deal in chicken, Query said everything has gone up in price. This challenge makes menu pricing difficult.

"Everything is more expensive, and we are paying more for products, utilities, wages and rents," he said. "The only way a restaurant operator can combat that is with the menu, and either the portions get smaller or the prices get larger, and that's really tricky."

Overall it's about the perception of value from the diner, he added. This may be easier to do when comparing serving a half chicken for $16.95 as opposed to half-a-dozen chargrilled oysters for $24.

In part the value of the food to the diner is why The Post has become so popular in and near Denver.

"It's not easy, if it was, they would call it snowboarding," joked Query. "In the end, it's fried chicken, and our job is to stay in the conversation."