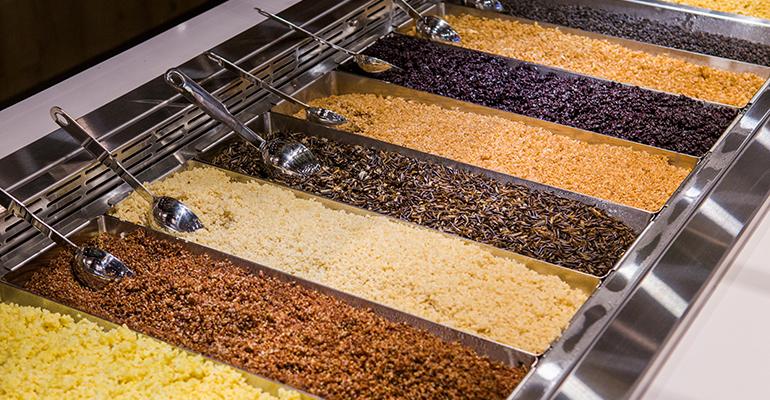 Lettuce Entertain You
Freekah and other grains on the build-your-own salad bar at Beatrix Market in Chicago.
Trends>New Restaurant Concepts

Ancient but so on trend

In the fast-casual space, a growing number of chefs are turning to ancient grains most Americans have never heard of, let alone tasted.

Chefs are hoping these versatile, nutrient-dense and authentic grains, which have been cultivated for thousands of years, will catch on with today’s consumers, and maybe even become the next quinoa. 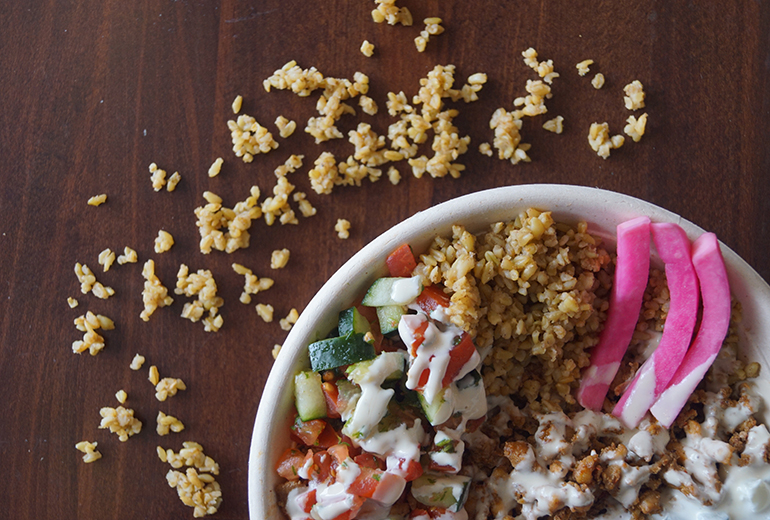 A Freekah bowl with chicken shawarma at SAJJ Mediterranean.

Getting their freekeh on

Related: Flavor of the Week: Freekeh shows versatility across the menu

The most familiar of these grains popping up in fast-casual concepts is freekeh. A wheat from North Africa that is harvested young, then parched, fire roasted, dried and rubbed, freekeh has as an earthy, smoky flavor. It is often used in Mediterranean and Middle Eastern cuisines, and has long been part of the food culture in countries such as Jordan, Egypt, Lebanon and Syria.

“When we first introduced freekeh on our menus, most of our customers had never heard of the grain,” said Loay Alhindi, executive chef of SAJJ Mediterranean, a farm-to-table fast casual concept with 11 locations in Southern California.

Indeed, only 13% of consumers are even aware of freekeh, and only 5% have tried it, according to Datassential Menu Trends.

“It was up to our team to introduce it to guests and encourage them to try it when they ordered,” said Alhindi. 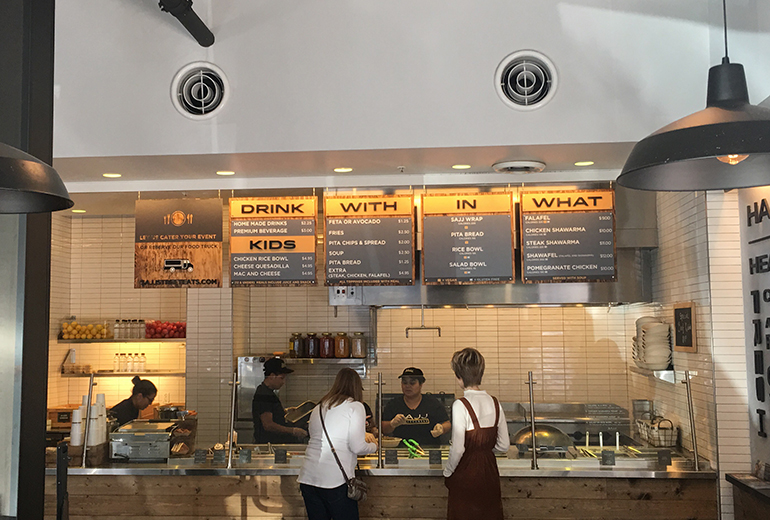 At SAJJ, freekeh is available as a base option for customizable bowls, or as a hearty addition to salads, sandwiches and wraps. Alhindi’s recommendation? Top a bowl of freekeh with chicken shawarma, tzatziki, cucumber tomato salad, pickled turnips and tahini.

“I wanted to introduce freekeh to our menu because it's a very authentic Middle Eastern ingredient,” said Alhindi.  “It’s a healthier and more nutrient-dense option compared to regular white rice.”

Per serving, Freekeh has about one-third more protein and nearly four times as much fiber as white rice, and fewer calories.

“Every customer who’s tried our freekeh has come back and asked about it,” said Alhindi. “We've seen it become more popular day after day.”

Freekeh is among the 20 different grains, as well as legumes and seeds, customers can eat as is or mix into a salad. Freekeh is also used in Beatrix’s seasonal, chef-prepared salads made with fresh vegetables, dried, nuts, fruits and herbs.

"We serve freekeh cold alongside grains such as spelt, bulgur, quinoa, millet and amaranth,” said Chef Partner Janet Kirker. “We steam the freekeh and offer it in the grains and legumes section of our salad bar to offer our guests a wide variety of textures, flavors and nutritional profiles for their salad creations.”

A tiny, ancient grain grown throughout West Africa, fonio is considered a supergrain because it is low in calories but packed with nutrients. It’s high in fiber, iron and amino acids, and an excellent source of zinc, a mineral that is essential for proper growth and development of children. 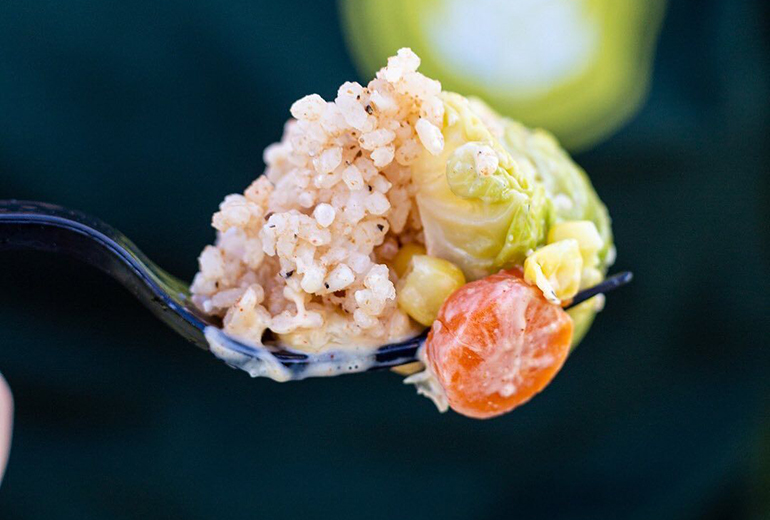 Though fonio is still in the very early inception phase on menus, according to Datassential MenuTrends, Senegalese Chef Pierre Thiam said “the interest is growing.”

Increase in awareness of fonio is in large part because of Thiam, who has arguably been its biggest champion stateside. Thiam, who likes fonio for its neutral, slightly nutty flavor and its versatility, serves the quick-cooking grain at Teranga, his new fast-casual African comfort-food concept in New York City’s Harlem.

“It’s a grain I like to play with,” said Thiam.

At the same time, Thiam has been working to get fonio into the hands of more chefs and at-home cooks through Yolele Foods, his purpose-driven African food company. By making fonio more familiar, Thiam hopes to get chefs and consumer hooked on an ingredient he loves, but also to elevate the economy and livelihood of communities across the West African Sahel.

“Producers, farmers, consumers, everyone can benefit from it,” said Thiam.

Also exploring ways to bring fonio to the forefront is New York City-based Fresh&Co, a fast-casual concept, focused on fresh, creative and healthy fare with 19 locations.

“It’s been said that fonio is the oldest and most nutritious grain that most have never heard of,” said Craig Rispoli, Fresh&Co executive chef.

Fresh& Co first began offering fonio last March with the launch of its spring menu. Currently on the menu is a grab-and-go Fonio Bowl, a porridge-like dish of the West African grain topped with cashew cream, toasted almonds and blueberries.

“We started offering [Fonio Bowl] to our guests to provide them with an innovative menu option for breakfast or a snack,” said Rispoli.

Vegan and gluten-free, Rispoli said the Fonio Bowl has been such a huge hit with customers that Fresh&Co is exploring other applications for the versatile grain. Most recently Fresh&Co tested fonio as a base (mixed with roasted veggies and fresh herbs) served with roasted chicken, kabocha squash and cauliflower gratin, as part of the concept’s Market Table. 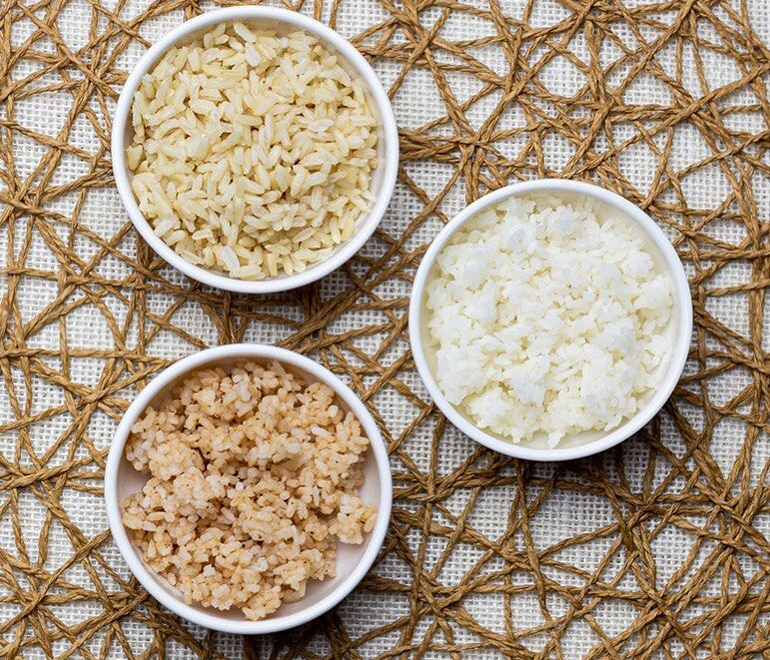 Though its name indicates otherwise, there’s nothing wrong broken rice, which is made of fragments of rice grains that have been intentionally broken in the field, during drying, during transport or by milling.

While broken rice, which is similar in nutrient content to brown rice, is not yet called out on Datassential MenuTrend reports, at least one fast-casual restaurant has named itself and built its entire concept around the fragmented grain typically used in West African, Thai and other Southeast Asian cuisines.

At Broken Rice, a recently opened build-your-own bowl concept inside the Trade Food Hall in Irvine, Calif., the menu is all broken rice, all the time.

“Rice dishes have always been my favorite staple food to eat,” said Peter Nguyen, chef and owner of Broken Rice “I came up with the concept for Broken Rice by combining all the flavors that I grew up eating.”

Originally a food truck in Orange County and Los Angeles, the new brick-and-mortar restaurant offers as a base for its bowls Jasmine Broken White Rice and Jasmine Garlic Red Rice, broken white rice that is mixed with tomato and garlic paste to give it the color and flavor.

“The beautiful jasmine aroma is enhanced even more when the grains are broken,” said Nguyen. “Our rice bowls are packed with flavors, and you could build different bowls each day — that’s the beauty here at Broken Rice.”