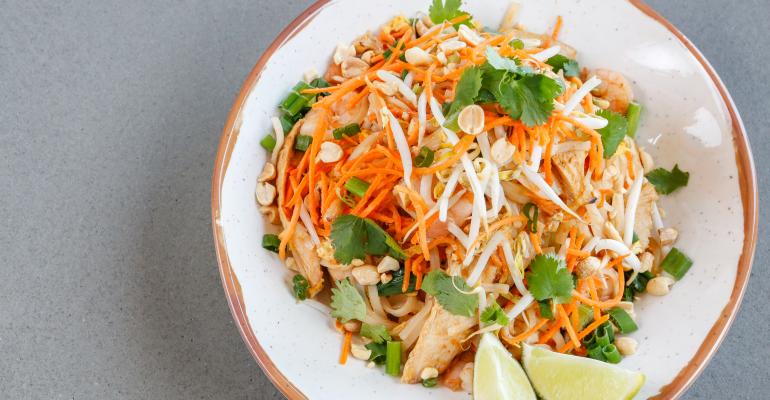 The polished fast-casual Broken Rice concept debuted in Denver on Thursday with a full bar and focus on Southeast Asian cuisine.

The concept by Startup Restaurants LLC is a hybrid of sorts, reflecting “modern life on the go,” said president Ric Gordon.

Guests can grab-and-go items at the counter, or order online for skip-the-line pickup. They can also order at the counter and sit, with food run to tables. There’s the option of sitting at the 12-seat bar and to get full service. Or diners can order Broken Rice delivery through GrubHub. “It’s an untapped market. Either people are doing Thai or Chinese or Japanese,” he said. “Pei Wei has done everything Asian, but no one is putting in the bar aspect.”

Gordon is a former senior director of operations for the LYFE Kitchen concept, but he also spent years in management at P.F. Chang’s China Bistro, which is also the parent company of Pei Wei.

Startup Restaurants also operated the former 9021Pho concept in Los Angeles, which has closed its four locations there. It was a full-service concept and labor costs became unmanageable, he said. The name Broken Rice refers to the grains of rice that often break during harvest, resulting in smaller pieces that are used in many cheaper street foods. Broken rice is typically softer, stickier and more absorbent, and it cooks more quickly. It also represents the theme for the concept: fresh, quick and affordable.

The bone broth for pho is made in house, and Broken Rice uses local and organic ingredients where possible. The restaurant serves kegged beer and wine to eliminate bottle waste, with a Happy Hour featuring $5 menu items and drinks. The concept is designed for growth. The group plans to open a second location before the end of 2017, with another two in 2018. The goal is to use corporate locations to seed new markets and eventually launch a franchising program, said Gordon.

Funding for growth is in place with some big name investors.

Among them are venture capitalist Chamath Palihapitiya, founder of Social Capital LP and a former Facebook executive and an owner of the Golden State Warriors; Bobby Baldwin, CEO of MGM Mirage Resorts and president and CEO of Project City Center Las Vegas; and Guy Laliberté, founder and owner of Cirque du Soleil.