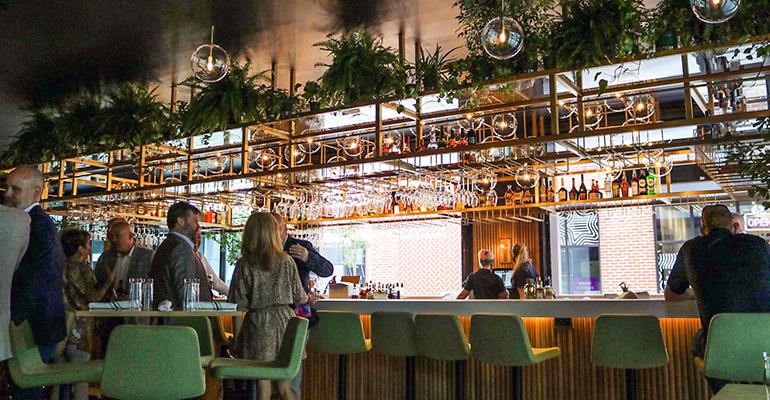 Erickson said he likes to keep the menu changing often because it  “keeps us from getting bored, because we are cooking every day and you don't want to get complacent."
Trends>New Restaurant Concepts

Drew Erickson’s ever-changing seasonal menu at the new Camp in Greenville, S.C. is designed to keep things interesting for staff and guests

When Drew Erickson was in high school, he worked at the iconic Greenville, S.C. restaurant Soby’s, where chef Shaun Garcia gave the young culinary hopeful a copy of The French Laundry cookbook.

A few years later, Erickson was working as a saucier in Thomas Keller’s flagship restaurant kitchen in Yountville, Calif. He spent four years there before returning to Greenville — and to Table 301, the company that is home to Soby’s and a number of other concepts, including The Little Goat and Nose Dive.

Now Erickson serves as director of culinary development for the group, and he is helping to expand the family of concepts with the new Camp, which opened earlier this summer, and has experienced sold out crowds and is solidly booked through the end of September.

He describes the 100-seat Camp is a truly American concept that pulls from global flavors. 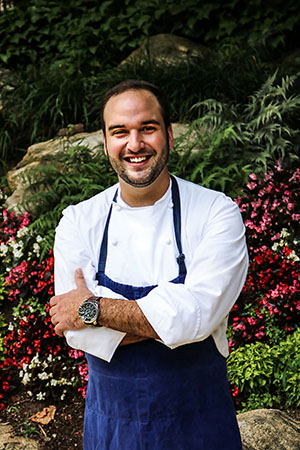 “The Greenville area has always been regarded as somewhat of a foodie city, but I think what I've heard a lot of is that people are set in their ways. How many times can you have shrimp and grits?” said Erickson, left.

“When we were designing the concept, we were worried about pigeonholing ourselves into one specific type of cuisine,” he added. “We wanted to have a concept where we had complete creative freedom to kind of cook whatever we want when we want.”

The menu changes often, but two of Erickson’s favorite items on the menu at the moment are the pork tostadas and the calamari. The pork tostadas are made of a braised pork shoulder with a habanero pineapple salsa topped with micro cilantro on housemade tortillas, which sell for $9. The calamari is grilled and served on top of Thai-style tom yum soup with pork belly, serrano ham, kaffir lime, peanuts and fresh herbs which is sold for $16.

Average prices for smaller plates are around $10 and larger plates $28 at Camp.

About 70% of the restaurant’s produce comes from a local farm, where Camp owns a plot of land. Growing Green Family Farms’ owner Nathan Vannette helps Camp pick and choose the fruits and vegetables that are most in season, depending on crop yield and weather, which inspires the rotating menu and keeps things interesting for the kitchen staff.

“Several descriptions on the menu just say summer [vegetable], and then, Nathan dictates what is ready to be showcased,” said Erickson.

Erickson said he built a team that works well together.

Joining him in the kitchen are two friends and former colleagues from other Table 301 concepts: Diego Campos, who worked with Erickson at Soby’s, serves at executive sous chef at Camp; and Matthew Ballaro, who was a line cook at The Lazy Goat, is the sous chef.

That has been an additional comfort for Erickson at the helm, who is the youngest in the kitchen. But the congeniality of the team comes through to the dining room.

The kitchen is designed to be an open space, visible to customers and often the chefs can be seen laughing with one another before resuming work.

“I've had great respect for [Erickson’s] work ethic and the fact that he's able to put friendship on one side and professional life on the other side,” said Campos.

Erickson said he likes to keep the menu changing often because it  “keeps us from getting bored, because we are cooking every day and you don't want to get complacent.

“A lot of the menu is driven by not just me but, like, if Diego or Matt comes up and be like ‘Hey I want to try this new gnocchi dish and I want to put roast poblano peppers into street corn,’ we will,” said Erickson. “The creative freedom is empowering your employees in your kitchen and encourages them to contribute and ownership of menu items as well.”