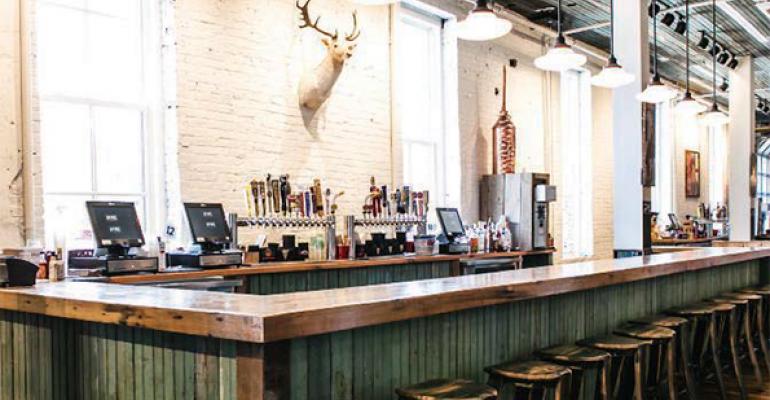 What Times Square is to New York, Honky-Tonk Row is to Nashville. Meander your way down the crowded Lower Broadway sidewalk during the day and you’ll find yourself dodging fanny packs and kitschy country music memorabilia. At night, you’re evading bright neon lights and stumbling drunken tourists. No matter the time of day, someone in your group will want to stop and take a picture with the Elvis statue.

The famous honky-tonk bars of downtown Nashville attract out-of-town music fans and whiskey drinkers, but not so much local diners. While the music scene has opened many doors for today’s famous country music songwriters, the food scene is nothing to write home about. Most kitchens are meant to serve young partygoers who’ve drunk their fair share of draft beer from a plastic cup and are looking for that late-night fill-up.

Tom Morales and Matt Farley are out to change that.

Morales, a Nashville native, has already made his mark on the Music City with a catering company called TomKats, which provides onsite catering to TV and movie sets, as well as a handful of local restaurants: the legendary Loveless Café along Highway 100; Saffire in nearby Franklin, TN; and The Southern, a steakhouse and oyster bar in downtown Nashville.

Farley, on the other hand, is Nashville’s up-and-comer. He attended the French Culinary Institute and built a cooking career in New York, all the while playing music in seedy Manhattan clubs. He moved to Nashville in 2009 to record an album but soon realized a career in restaurants provided a more stable income and, most importantly, health insurance.

The restaurant owner ran into the unemployed musician/cook during a happenstance late-night meeting, and in 2010 Morales offered Farley a job as executive chef of The Southern, which was little more than a blueprint at that time. As The Southern came together, downtown Nashville started to evolve and a new state-of-the art convention center began attracting a national crowd. Morales recognized an opportunity: elevate the Lower Broadway honky-tonk experience both for locals and this new breed of visitors.

“It used to be that most of your tourists were here for the country music, which typically has a lower demographic,” he says. “With the Music City Center opening, the demographics have changed and now you have this high-end corporate traveler. That’s been the strongest component of Nashville’s hospitality growth—the return of the corporate credit card.”

Morales once again tapped Farley to oversee his new dream kitchen. In August, the two opened Acme Feed & Seed, a three-story venue with reclaimed décor, unique food and drink and an eclectic array of live music that has already carved its own niche on Lower Broadway.

“We wanted to elevate the honky-tonk experience by adding an upscale vibe and quality food options,” Morales says. “Typically, the beer isn’t good and, unless you’re shitfaced, the music isn’t very good, either.”

Acme opened in a 132-year-old building, promising to pay homage to downtown Nashville’s history. The building, originally constructed in 1882 as a farm supply store, held a special place in Morales’s heart. As a kid growing up in Nashville, Morales and his six brothers would take their three German Shepherds to the building for grooming. Those childhood memories led Morales to meticulously restore the building to its historic roots in what he calls his “most ambitious project yet.”

The responsibility of a historic renovation adds to the appeal, he says. “With this building, the challenge was not to destroy what was there. And, in a lot of ways, that was a bigger challenge,” he says.

Each floor of the 22,000-square-foot Acme provides distinctly different experiences.

The first level features community-style seating, a fast-casual menu described as “gourmet, street-food-style cuisine,” and live music each night. The design doesn’t veer too far from neighboring honky-tonks, with a large board highlighting the menu items, a bar and a stage. Wood-planked floors and ceilings with distressed chairs and tables remind patrons of the building’s history.

The second floor cocktail lounge evokes Southern hospitality with a long, custom-made sofa and bar. It’s here where Morales’s eye for design detail shines through. Each piece of furniture and vintage knick-knack has been meticulously selected to add warmth and nostalgia to the space. There’s lounge seating, intimate group spaces, craft cocktails, vintage games and flat-screen TVs. It’s a place to get away from the hustle and bustle and actually hold a conversation.

The third floor holds a private event and concert space and a rooftop patio with a 200-person capacity, which offers one of the best views in the city, overlooking Broadway, the Cumberland River and downtown Nashville.

Morales and Farley collaborated on the menu, which offers upscale food in a fast-casual environment. Customers order at the counter and take a number to their table, where their food is delivered. The menu is divided by ingredients—there’s a section for chicken, pork, beef, fish and vegetables, as well as snacks and sides—and offers something for just about everyone. Mexican street corn (grilled corn with cotija, lime aioli & chili) is $6 and prices run all the way to $22 for a full rack of ribs with mac n’ cheese, collard greens and slaw.

Farley welcomed the culinary input from his employer. For example, Morales told Farley early on that he wanted a dish with curried chickpeas on the menu. So Farley developed a dish that features coconut rice, curried chickpeas, cashews, cilantro and chilies, all topped with a fried egg and served with made-to-order fry bread ($9). Morales named it “The Hatchery.”

“He names everything. I’ve never named a dish in my life,” Farley quips.

Farley describes The Acme’s menu as “eclectic, in a really relaxed and casual environment.” There are nods to Mexican food (smoked chicken and green chili burrito with rice and beans), a bit of Asian (Thai-style shrimp fried rice served with an egg roll), Southern classics (overnight-smoked beef brisket sandwich) and even falafel made with pickled cucumbers, dill and tomatoes and served with pita bread.

Farley says what brings the dishes together is that they are each cooked with a refined technique. “Otherwise I wouldn’t be able to sleep at night,” he adds. His favorite dish? Griot with ti malice and pikliz, which is translated on the menu as seasoned fried pork with black beans, plantains and sweet habanero slaw.

“It’s a bar, but you’re not going to get food like this at any other bar in Nashville,” Farley boasts.

Judging from early reviews, even the locals would agree.