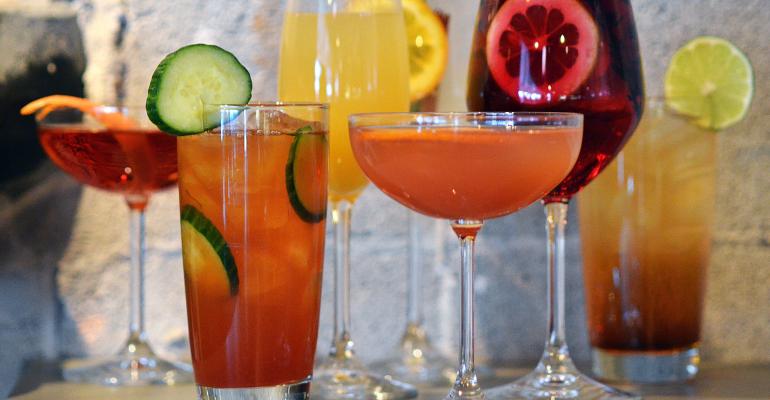 Fueling the customization craze for beverages

Operators cater to customers&#39; desire to personalize their drink offerings.

The typical menu at Smoothie King offers about 40 different beverages, but when consumers begin customizing drinks, the combinations are endless, says Katherine LeBlanc, director of brand marketing for the New Orleans-based juice bar.

The chain will make any smoothie a “skinny” by omitting the sugar or opting for almond milk instead of non-fat milk. And then there are all the varieties of dietary supplements for such things as energy, immune health and multivitamins to enhance a drink.

“Our franchisees know that offering customized beverages can keep customers coming back for more, because the customers feel that they are in control and able to have their drink just as they please,” LeBlanc says.

In an era of build-your-own pizzas, burritos and burgers, the demand for customization has spilled over into beverages. Consumers today — millennials in particular — delight in putting a personal stamp on drinks just as they do with food. Operators can cater to the customization trend by creating an environment in which customers are comfortable requesting changes, or by offering self-serve flavored syrups and flavoring options for everything from sodas and smoothies to coffee, tea and cocktails.

“We find that more people, generally speaking, are customizing,” Maynard says. “And as restaurateurs, we are doing a better job of accommodating them. After all, we’re generating a service; we are here to serve people.”

Consumers like to be able to mix and match flavors in a variety of drinks, especially brewed drinks such as coffee and tea, reports Chicago research firm Datassential.

Up to 75 percent of consumers add some flavoring to their brewed coffee when purchased away-from-home. Of those, 66 percent add some variety of creamer, 48 percent add a sweetener, and 8 percent add a flavored syrup, according to Datassential’s Buzz report.

“Coffee has gotten to the point where it’s like the American burger — how many ways can you build your own burger?” says Adam Jed, co-owner and beverage director of San Francisco restaurant Bluestem Brasserie.

Consumers are adding a variety of flavors and milks to their coffee drinks, particularly with the now-popular, flat white coffee drink — an espresso with a layer of steamed milk. Customers are tweaking the drink with almond or coconut milk instead of cow's milk.

“Listening to the guest is essential for success,” Jed says. “There are a lot of great ideas that we may not have thought of or that can be evolved into a menu offering.”

After listening to one of their regular customers who constantly changed the bourbon in their standard Manhattan drink, Bluestem changed the drink on its menu, he says. The different liquor brought out different flavor nuances that improved the cocktail.

“It helped soften the flavor and brought out some smokiness from the bourbon that was not there before,” Jed says.

Offering a variety of choices also enables restaurants to make the consumer feel in control, but yet still provide a satisfying experience, says Caitlin Mackey, bar manager at The Restaurant at Went Vineyards, in Livermore, Calif. The restaurant makes its own tonics, simple syrups and bitters for its cocktails, often from herbs in its on-site garden.

Mackey and the restaurant’s gardener work together to develop specific profiles for drinks. A variety of tonics gives customers more choices, and whatever they choose should still blend well with the way a drink was originally designed, she says. But bartenders and servers will still make changes at the customer’s request.

“If a guest does not like our original cocktail, we will change it to something they like,” Mackey says. “If it’s a strawberry drink and they want blueberries in it, we will do that for them.”

At Smoothie King, repeat customers are more likely to customize their drinks than those trying the smoothies for the first time, LeBlanc says.

“Our frequent guests typically customize their orders and they are excited to talk about what customization they’ve done to their friends and other customers,” she says.

Younger generation customers, in particular, like to customize and share their choices on social media, Leblanc says.

Franchisees also will use a white board to feature drinks that encourage customizing, such as suggesting enhancers for a smoothie like the Watermelon Hydrator, LeBlanc says.

“In our new campaigns promoting a specific product, we’ll take quotes from the guest about a drink they tried and how they changed it and weave that into our social media content,” she says.

However operators choose to get the message out, though, they are clearly emphasizing the fact that the days of featuring a static beverage menu are waning. Customers want to personalize their beverages and operators say they intend to give them what they want.