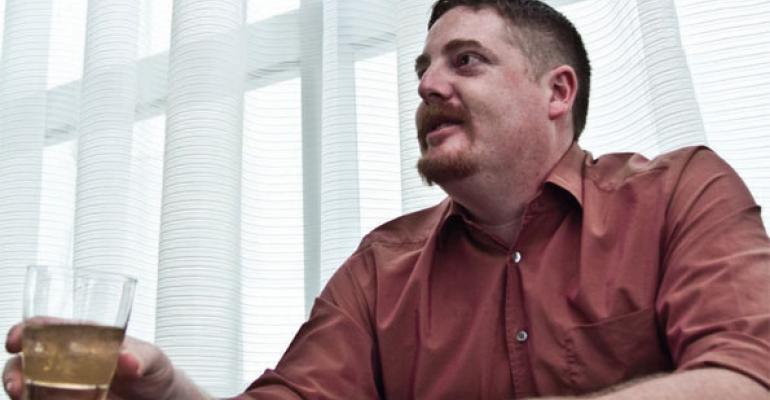 Private Social got a ton of attention when it opened late last year on the momentum of its kitchen talent, Tiffany Derry, who was declared a “fan favorite” while appearing on Season 7 of Bravo’s Top Chef. But during a recent visit to the restaurant in Uptown Dallas, I was scouting another talent, Rocco Milano, who’s been making a name for himself behind the bar as a mixologist. Looking over his cocktail menu, I was intrigued by a number of his drinks, including the Italian Old-Fashioned. His recipe calls for Bulleit Bourbon, Orange Zest, Lemon Zest, Dolin Rouge Sweet Vermouth and Dehydrated Campari. Of course, it was the dehydrated Campari that caught my attention and gives the cocktail its Italian slant. I asked my server about the ingredient, and she quickly fetched Milano before I could stop her.  Not many mixologists are eager to be summoned to the dining room on a busy Friday night. But Private Social’s “principal barman,” as he’s billed on the menu, couldn’t have been more excited to chat about his passion. His enthusiasm and perhaps his innate Italian proclivity toward gesturing nearly amounted to a dining room dance . . . and Milano is no tiny dancer. The dehydrated Campari, he excitedly explained, is simply the result of Campari being allowed to dry out as it sits in a sheet pan atop a kitchen oven. It’s then pulverized into a powder.

Surprisingly, he’s been plying his trade for only six years, but in 2009 Milano landed a mixologist position at the venerated Mansion on Turtle Creek, and he’s never looked back.  Within six months he was promoted to a management position. Now at Private Social, his handcrafted drinks employ house-made bitters, infused premium spirits, fresh ingredients and ice spheres (large balls of ice). Within weeks of opening, his cocktails put Private Social on Dallas Morning News’ list of 10 Great Places to Lift a Glass. The world would be a better place if everyone were as happy to toil and excel as Rocco Milano.