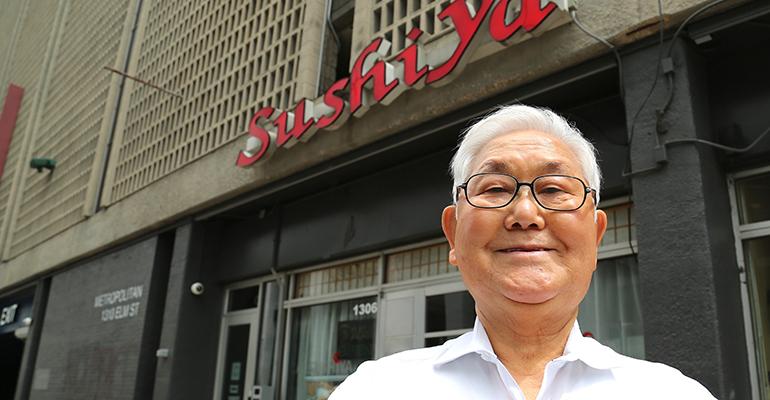 Ron Ruggless
After suffering a precipitous drop in traffic with the pandemic, Kang Lee, owner of the 14-year-old Sushiya in Dallas, was rescued by his grandson's viral TikTok video in March.
Operations>Marketing

The tick-tock on TikTok for restaurants

When the year-old COVID-19 pandemic had slowed traffic to a trickle this spring at the Sushiya restaurant and bar in downtown Dallas, 80-year-old owner Kang Lee got a massive TikTok boost from his visiting teenage grandson.

The son of Lee’s daughter, Andrew Rafael Kim, was visiting with his family from St. Paul, Minn., and the 18-year-old TikTok leader posted a 10-second video on March 19.

Kim’s TikTok post, which featured his grandfather, Sushiya staff members and a soundtrack of the Beach Bunny’s song “Cloud 9,” exploded.

The video went beyond viral; it was a pandemic-level TikTok. By June 1, the video had logged 2 million views, more than 33,700 comments and 47,300 shares.

Kim had noted on his TikTok video that “business has been slow with corona, so it would mean a lot if u came :) #smallbusiness #sushi #texas #food.”

Lee said the TikTok video, a month and a half later, is still attracting guests to his small sushi bar.

“It really has been exciting,” he said, saying business more than doubled and that has continued into June.

Such is the power of the entertainment app for short videos, which was first released in September 2016. Available both for iOS and Android, TikTok was initially launched as Douyin in in China and in 2017 as ByteDance for markets outside China. ByteDance acquired the Musical.ly app in late 2017 and smoothed its access to the U.S. teenage market.

“TikTok is where people create and share short-form videos,” a representatives said on a recent Clubhouse chat.  “But honestly it's so much more. TikTok’s action and sound is authentic, creative and joyful. This unique experience gives businesses of all sizes local bookstores and candy shops crafters to side hustlers, startups and innovators the opportunity to create connect and thrive.”

And the audience skews toward the younger consumers, especially those aged 18 to 29.

A Pew Research Center survey in April found YouTube and Facebook continue to have the broadest reach among all groups, but TikTok stands tall among the up-and-comers.

“There are certain sites or apps, most notably Instagram, Snapchat and TikTok, that have an especially strong following among young adults. In fact, a majority of 18- to 29-year-olds say they use Instagram (71%) or Snapchat (65%), while roughly half say the same for TikTok,” the recent Pew study found.

Restaurant operators, faced with a growing menu of social media, have been sampling the TikTok platform, especially for enhancing their image among potential young employees.

Big companies with deeper resources have tapped into the TikTok community.

For example, Greenwood, Colo.-based Red Robin Gourmet Burgers Inc. on April 29 celebrated National Dance Day by partnering with “Dancing with the Stars” Derek Hough for a “Bacon Dance” promotion, which encouraged TikTok users to record videos of themselves, tag the company and Hough and get a chance to meet the dancer in person.

“The return on investment is still unknown for restaurants as TikTok does not currently have the capabilities built in [that] direct users to a website or ‘order now’ functionality,” Patel said.  “Until the platform evolves to be more small-medium business friendly, it is mostly just an avenue to build awareness.”

Robinson said the Sushiya TikTok video was a perfect example of that real content.

“Sushiya's grandson didn't stick to posting promotional videos of the space and food, he was honest and showed the challenges the restaurant was facing, which in turn resulted in real engagement,” Robinson said.