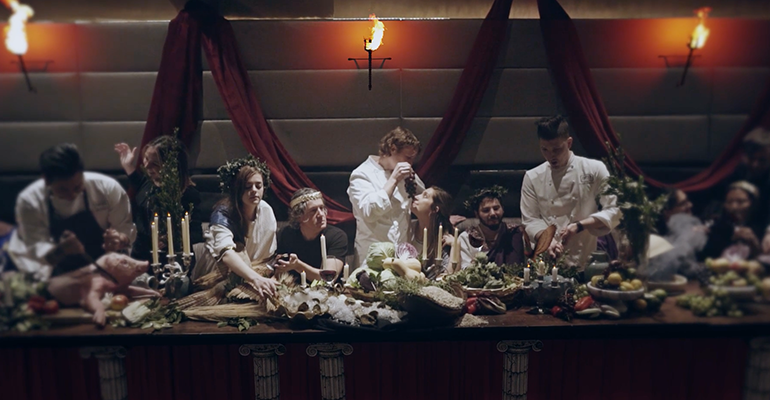 Say it with video

Digital research site eMarketer reports that four times as many consumers would rather watch a video about a product than read about it. Additional revelations from the Cisco Visual Networking Index tell us that global video traffic will encompass 82 percent of all consumer Internet traffic by 2020.

But it’s not as simple as shooting some quick video of restaurant dishes and slapping it up online. Here’s how experts recommend shaping a thoughtful video marketing strategy:

The inspiration behind the majority of the videos produced for Chicago’s Alinea Group is always to tell a story, said co-owner Nick Kokonas.

“We strive to provide unique experiences for our guests and this is a great visual medium to get across not just the idea, but also the emotion of the menu, ideas, and inspirations for the experiences,” he said.

Alinea Group, parent to the restaurants Alinea, Next and The Aviary, began creating video trailers for its restaurants in 2004, before Alinea opened, he said. Since then, the group has made dozens.

“Recently we hired Allen Hemberger to do all of our media — he was formerly at Pixar — and he is the creative director and producer of Next’s Ancient Rome video,” a richly elaborate version of the Mannequin Challenge that went viral earlier this year.

Social media is the main outlet for the group’s videos, with channels designated for each restaurant on YouTube. “Some have gotten several hundred thousand views while others get 10,000 to 20,000 views,” he said.

“Every video is different, but they need to tell a story and be surprising,” said Kokonas. “You need a twist of some sort — visually, musically, whatever it may be. Also, they cannot be overly serious. We’ve made that mistake, and generally they have to be a bit self-deprecating.”

Everyone loves the latest scoop about a new restaurant coming to town, so why not give locals a sneak peek via video?

That was the thinking behind a video created by Jason Varney for chef Marcie Turney and Valerie Safran when they were about to open their first restaurant Little Nonna’s in Philadelphia in 2013.

The video was shared with the press as a teaser, and is still featured on the restaurant’s website. “We thought, ‘If movies have trailers, why can’t restaurants do the same?’” Turney said.

“We occasionally share the video on various social media accounts as a throwback, but it still garners the most views on our website,” said Safran. “To date, it’s been viewed more than 13,500 times.”

Even after four years they’re still receiving positive comments from people who have seen the video, Turney said. “Oftentimes, we hear that the video is what encouraged guests to make a reservation as it really gives a nice feel to the experience we’re going to provide at the restaurant,” she said.

“The more creative you can be with a video, the better,” said Safran. “Allow the visuals of the atmosphere, the food and the drinks speak for themselves.”

Public School on Tap, with locations in Los Angeles, Texas, Colorado and Nevada, enlists its servers to create fun videos showcasing their personalities.

“All our videos are done in-house by team members,” said Liz Geavaras, vice president of marketing at Grill Concepts Inc. “The ‘ranch’ video was spear-headed by two servers who have an interest in film production.”

“I think a good video should feel authentic and really highlight the food and personality of the restaurant,” said Geavaras. “We try to encourage our teams to have fun with it every time, because the fun will come through no matter what, and Public School is a place to have fun with food.”

“We wanted to give people a virtual tour of our organic farms and speak to our mission about changing the food system,” said Ben Friedman, Homegrown’s co-owner.

Shot and edited by Seattle photographer/videographer Kent Colony, the video has garnered a good bit of positive feedback, said Friedman.

“We receive lots of positive comments and customers asking to visit our farm,” he said. “We just started our own organic farm in San Francisco and we’re going to shoot some aerial drone footage that we’re really excited about.”

For Sean Brennan, founder and CEO of The Pie Hole in Los Angeles, characteristics of a great restaurant video include, “Not too long, tells a straight-forward story, and makes you feel good,” he said.

Videographer Andy Schlachtenhaufen shot a video for Brennan in 2011 that did just that.

“It was shot in the first couple months of opening,” said Brennan. “We just wanted to capture the authenticity of the brand. We didn't want to make a commercial; it was more about trying to create the same feeling on video that we create in the shop.”

The video, which uses only visuals and music to tell the story, is used mainly on the website, according to Brennan. “The brand has grown since we made it, so it would be derivative to continue to use it exclusively as a marketing tool,” he said. “Last I looked, the video had 27,000 views on Vimeo.”

Emeril Lagasse’s Delmonico Steakhouse in Las Vegas wanted a new way to reach customers and enliven its brand. That led to one7communications identifying recipe videos as a format for engaging food-focused users and converting them to restaurant patrons, according to one7communications social media manager Eric Gladstone.

Created by sister company Circle Group, the recipe videos have garnered more than 100,000 views on social media and are directed by Hermon Farahi and produced by H Alireza Farahi, according to Gladstone.

“We posted the videos on the Delmonico Steakhouse social media channels and then reshared the videos to chef Emeril’s personal account, sister restaurants, host property The Venetian, as well as various staff personal accounts,” said Gladstone. “By far, Facebook got the best response, primarily on Emeril’s own page.”

When creating your own video, Gladstone suggests keeping it short and sweet.

“A great restaurant video should capture the essence of a restaurant’s culture and experience in 60 seconds or less, and make you want to visit,” he said.