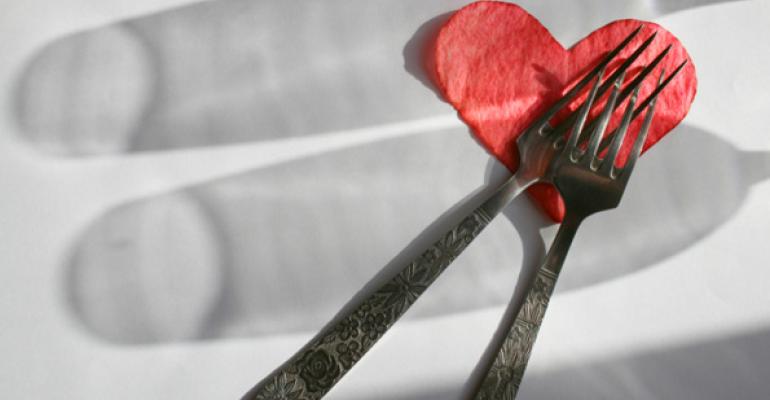 Looking for ideas to capture a bigger piece of the hefty Valentine&rsquo;s Day pie? &bull; RELATED: Valentine&#39;s Day second only to Mom&#39;s Day for restaurants &bull; GALLERY: Ramp up the romance with 16 sips for lovers &bull; See more Marketing articles

By now, everyone in the restaurant business is keenly aware of how important Valentine’s Day is. There’s more than one way to capitalize on this brief but powerful spike in demand for romantic splurges. We’ve rounded up a few good ideas.

Before reading on, by the way, don’t forget an important—and profitable—strategy: Whip up some sexy-sounding cocktails to complement the sensual food selections. Check out this gallery of drink inspirations.

Hit all the right luxury notes.

Chefs at Café des Architectes in Chicago’s Sofitel have created a sumptuous five-course, $95 tasting menu accented by premium touches such as foie gras, quail egg and caviar. For a $20 extra, guests can add the panache of French truffle to a course.

Shaw’s Crab House in Schaumburg, IL, is rolling out the Grand Crab Buffet on Valentine’s Day. It’s a spread of Alaskan King Crab, Dungeness, snow crab and hot sides such as hand-carved beef tenderloin, lobster & brie pasta and au gratin potatoes. A cold seafood and salad bar and a variety of desserts cap the buffet, which will run $60 per person on Feb. 14-15.

Play up the aphrodisiac angle.

“We may never know exactly which foods will get someone in the mood and which ones won’t,” says Ryan Fichter, executive chef at Rialto, a new Italian restaurant in Washington, DC’s Georgetown neighborhood. “But there are some foods that many people believe are more prone to helping someone get in the mood. Never hurts to start by trying those dishes and increasing your chances for a great evening.”

The Valentine’s Day dinner at Rialto folds in some of the more popular foods thought to have aphrodisiac qualities, including seafood (especially shrimp, thought to supply energy), alcohol (well-known disinhibitor and social lubricant), chocolate (to improve blood flow and, well, do you need to ask?), caffeine (for energy) and spices (to boost circulation). The $65 five-course meal includes three set and two multiple-option courses and two glasses of prosecco.

Vega Tapas Café in Metairie, LA, combined foods with suggestive reputations, names or appearance into a six-course journey of seduction. In the lineup:

A bit more subtle approach comes from Chef Derek Simcik of Atwood Café in Chicago. His “My Heart Skipped a Beat” tasting menu will present four courses, all shaped like a heart. The tasting menu will sell for $55.

A restaurant can’t relocate to a more romantic location, but intimate or prized spots within a restaurant can command a premium or pull guests seeking something special away from less-remarkable options. In Washington, DC, one such place is the Bird’s Nest at Plume. A $550-per couple seven-course tasting menu with wines is served in this cozy spot lit by a 110-year-old chandelier. On Valentine’s Day, the restaurant is offering one lucky and wealthy couple exclusive use of its Book Room for what it calls the 1776 Food & Wine Experience, which includes fine wines that Jefferson may have drunk during his lifetime. Cost: $1,776 per person.

Consider a package similar to a $75 menu for two at Floriole in Chicago: a bottle of wine, a starter, a pizza and a dessert to share.

The Pikey, in L.A., is one of many restaurants planning for lunch dates on Valentine’s Day weekend with specials such as “Lady and the Tramp” Spaghetti and Meatballs with Ribeye, Brisket and Short Rib Meatballs ($20) or ½ Dozen West Coast Oysters on the Half Shell with a bottle of bubbly for $25.

Another Chicago spot, EL Ideas, has planned a $165 BYOB Jaded Hearts dinner for “the multitudes who are single, have been dumped, or just disdain the goo-goo ga-ga nature of the occasion.” The Feb. 20 evening will feature selections from the one-Michelin-starred restaurant’s menu, accompanied by “a playlist with no romantic love songs, only songs about cheap sex and breaking up,” promotional materials note.

Chocolate lends itself to countless preparations, but if you’re seeking something new, consider Travel by Chocolate, a challenge that Four Seasons Hotels and Resorts threw out to its pastry chefs around the world. The creative chefs came back with a Maple Pretzel Marshmallow (chocolate-coated homemade maple marshmallow coated in pretzel crumbs), Chocolate-Dipped Coconut and Tamarind Samosa and the Hermes Malibu Mudslide, an adult hot chocolate spiked with coconut rum and local Tcho white chocolate.

Chocolate fondue is always on the menu at Melting Pot Restaurants, an even more compelling reason to visit the chain in February. The chain’s dessert choices include the Flaming Turtle, Chocolate S’mores and Yin & Yang, a dramatic juxtaposition of dark and white varieties. Chocolate fondue sales get a pre-Valentine’s Day jumpstart with National Chocolate Fondue Day (really), Feb. 5.