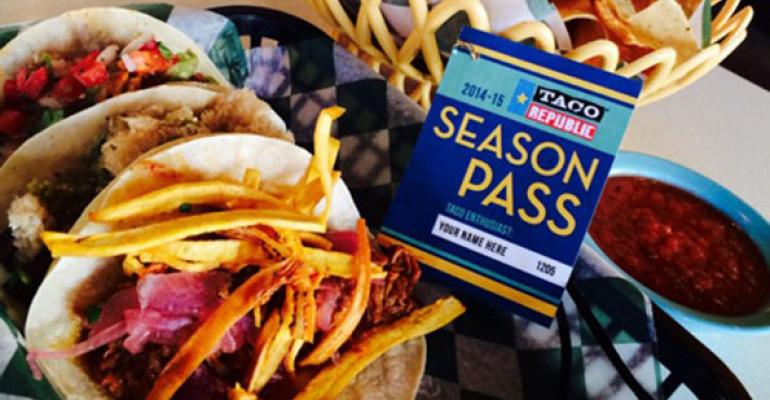 <p>The 2014-2015 Taco Republic Season Pass entitles owners to their choice of three tacos with chips and salsa each day from December 5, 2014, through March 5, 2015.</p>
Operations>Marketing

Are restaurant passes the next big thing?

An early winter is no good for a roadside taqueria in Kansas City, KS.

Taco Republic—a full-fledged Mexican taco shop—expects a significant sales drop over the winter months. This year, Mother Nature dealt those cards a bit earlier than usual, and the executive team at Bread & Butter Concepts, owners of Taco Republic, needed something to combat the revenue drop.

Management started discussing something similar to a winter ski pass, which provides a season-long lift ticket. Alan Gaylin, founder and owner of Bread & Butter, noticed Olive Garden’s Pasta Pass and all the attention it drummed up. But what would they sell and how would they sell it? Would it hurt or help business?

“We really wanted to focus on what we are: a taco place. We wanted to do what we do best,” Gaylin says. So the team created the 2014-2015 Taco Republic Season Pass, which entitles owners to their choice of three tacos with chips and salsa each day from December 5, 2014, through March 5, 2015.

Taco Republic made 150 passes available and began selling them on their website on Black Friday for $175 apiece. Buyers, if they take full advantage, could cash them in for $1,110 worth of tacos in that time frame. The company is counting on incremental sales to offset the cost of the passes.

“If customers buy a pass, they’ll most likely bring their friends or tell people about it,” Gaylin says. “It’s about building some revenue in the wintertime. We’re very tied into the community, people follow us, so it’s also about building relationships and getting to know the customer a bit better.”

Where it all began

In early September, Olive Garden launched its Never Ending Pasta Pass, a $100 card that entitled the bearer to an unlimited supply of pasta and soft drinks over the course of seven weeks. A total of 1,000 passes were sold in just over an hour, and stories of pasta overindulgence ensued. One man used his pass to feed as many people as he could, getting takeout as many as nine times a day and giving out 125 Olive Garden meals, often to homeless people.

Restaurant consultant Konrad Gessler with The New England Consulting Group says Olive Garden’s pass was clearly a promotional play. “Jimmy Kimmel picked it up, it was on national news,” he notes. “Olive Garden wasn’t trying to move the needle with sales; this was a promotion.”

“There are higher margins on alcohol drinks these folks might buy,” Gessler notes. “And you might bring the kids along, or your brother and sister.”

He says independent restaurants looking to adopt a pass strategy need to ask themselves the same type of questions: “Are we trying to drive traffic or is this an effort to drive profits?”

One consultant, Alissa Poloumieva at Hospitality House, a New York firm that works with museums, galleries and hotel brands to create destination restaurants, was less optimistic about passes working for independent restaurants. In New York, she says, there is enough guest traffic to fill seats without having to offer special promotional passes.

“For the most part, putting forth such tactics as using passes and promotions is not lucrative,” she says. “Operators tend to instill these options in order to increase overall volume in hopes of attracting new customers from untapped market segments. More successful restaurants have no need for this type of promotional marketing.”

At Taco Republic, the executive team expects the taco passes to be a loss leader. Gaylin set the $175 price according to what he thought market would bear. Also, the Taco Republic crowd skews a bit older, and Gaylin knew this type of promotion would get Millennials’ attention.

Gessler thinks passes could translate to any segment of the industry.

“You could run the risk of diluting a premium, white tablecloth brand and that might not be the atmosphere that restaurant wants to foster,” he notes. “But that’s not to say you couldn’t create a fancy premium pass that is very expensive.”

Gaylin is still kicking around how a pass might work for his other concepts, Gram & Dun steakhouse and BRGR Kitchen & Bar.

“You could probably figure it out a way to do it,” he says.