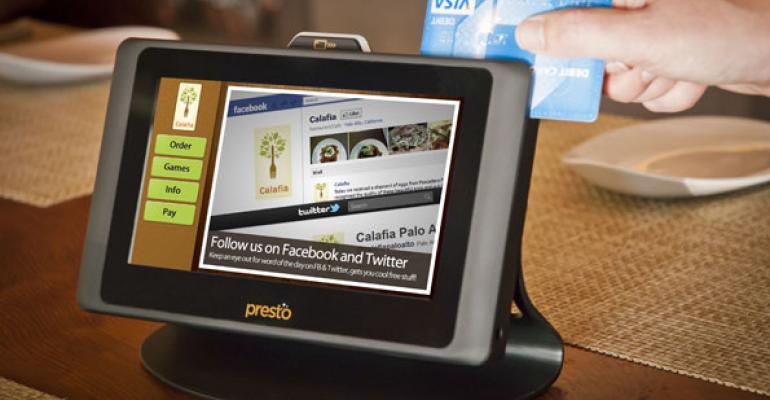 Apps that can help your ops

Tech startup E la Carte launched its Presto tabletop tablet amid some skepticism two years ago, but the company hoping to minimize the need for a wait staff just raised $13.5 million from venture capitalists. The company’s founder recently said tablet sales have been growing by 35 percent each month, and more than 100,000 tablets could be in use at restaurants across the country by the end of next year.

Whether those tablets make servers less relevant in that time remains to be seen, but there’s no denying technology, and in particular tablets and mobile applications, is changing the face of restaurant operations.

“Adding more consumer-facing technology options can be a way for a restaurant to differentiate itself from the competition,” says Hudson Riehle, s.v.p. of research at the National Restaurant Association. “Technology in restaurants is becoming more of an expectation than a novelty.”

Presto, designed specifically for restaurant use, offers guests an intuitive touch interface allowing them to browse the menu and specials, order and then pay at their leisure. E la Carte says restaurants using the tablet have seen a 10-percent increase in sales and a boost in loyalty program signups.

The 100-unit Mongolian barbecue chain, Genghis Grill, is piloting the system at a franchised location in Odessa, TX, with plans to roll it out system wide. “We’re a fun, tech savvy concept and our customers expect a smooth, seamless technology experience from us,” says Ron Parikh, the brand’s chief marketing officer.

Here are a handful of other examples of restaurants using new mobile applications to streamline operations and boost profits:

• Texas Roadhouse is using Red e App to connect its store managers, marketing teams and servers to make it easier to cover schedules and communicate training information, as well as going over product announcements, specials and other news. The restaurant industry in many states has gotten used to BYOB, but now BYOD (bring your own device) is gaining traction. The new private mobile messaging platform allows employees to communicate safely using their own devices.

For an industry based on work primarily done by employees who are barely, if ever, in front of a computer, a system like this can become as handy as email is in a larger office setting. Texas Roadhouse says employees aren’t provided mobile devices or required to download this app to their own, but since most of its hourly employees are millennials, their “smartphone is never more than 3 feet from them.”

• Mobile payment solutions have been growing through recent years, but the expectation is those baby steps will soon become giant leaps. Gartner, a technology research firm, predicts worldwide mobile payment transactions will increase on average by 42 percent each year through 2016. By then, “we’re forecasting a market worth $617 billion with 448 million users,” says Sandy Shen, the company’s research director.

NCR Mobile Pay is one company hoping to grab a piece of the action. Its new solution enables diners to use their smartphone to browse their bill, re-order menu items, call for their server and ultimately pay the bill. One early adopter, City Winery in New York City, has found it helps solve a frequent problem.

“We host concerts, food and wine classes and private events,” says David Richter, general manager, City Winery. “At the end  of these events we have multiple tables that our servers are trying to close out at the same time, which can be a real challenge.”

Other companies offer similar solutions. FirethornPay is a cloud-based mobile solution that allows customers to use their smartphone to pay their bills and tap into a loyalty program.

• Technology is even popping up in some of the lowest tech corners of the restaurant. CoatChex offers a new digital solution to help make the coat checking process quicker and hassle free for the guest (and restaurant). The ticketless system uses a tablet that diners can log into with an already created account or by using their phone number. They hand over their coats, which are barcoded and digitally captured to ensure there’s no later confusion, and they can pay with a credit card or use a pre-paid CoatChex account. For pickup, guests sign in using their phone number, an attendant verifies their identity and coat and they are on their way.