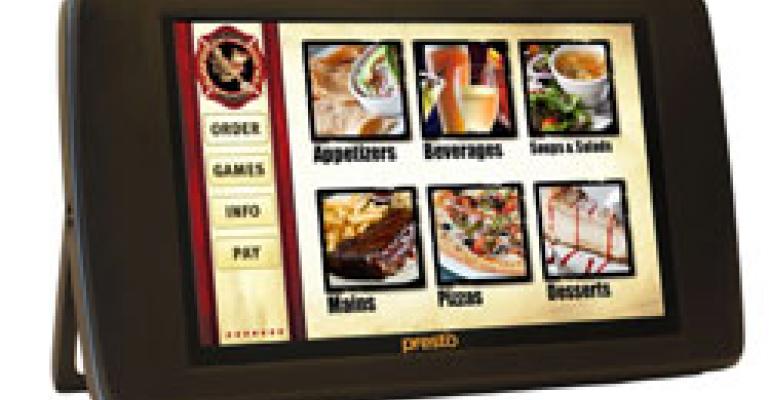 Don’t Axe Your Waitstaff Just Yet

Step aside, iPad. The hottest piece of tech gear right now might be the Presto, a PC tablet with which restaurant guests can “order, play games and pay from their seats without having to wait.” Its maker just got a $1 million capital injection, apparently from investors who never ate at one of the now-defunct uWink restaurants, which offered much the same capabilities on a tabletop device back in 2005.

Tech visionaries continue to roll out devices meant to diminish the significance of waiters and waiters in the dining equation. The general idea behind them is that technology trumps personality, even in a full-service environment. A couple of big chains use the Ziosk system and the 20 or so casual restaurants testing eTab’s touchscreen device report that sales go up 10 percent (and server tips rise two percent) when it’s in use.

The latest entrant, dubbed the Presto, comes from Palo Alto, CA, manufacturer E La Carte. Its system supplies a dedicated PC tablet to each restaurant’s table. The devices are iPad-like, but offer more rugged construction, all-day battery life and have a secure credit card reader on their sides. E La Carte promises operators that patrons who use this system will order faster; spend more freely, often upselling themselves on extra food and drink; and then pay faster at the end of the meal. The idea is that the device is so efficient that customers wind up turning their table faster than an actual waiter or waitress ever would. Guests will also be able to “play social games to take their mind off their hunger as they wait for their food to arrive,” the company says.

E La Carte claims the Presto’s economics will help it catch on. The device is touted as driving a 10 percent-plus boost in check averages, says founder Rajar Suri, amounting to $300,000 per year for a typical chain restaurant unit. Operators pay $100 a month for each device, said to break down to 40-50 cents per table per hour for an average restaurant that serves both lunch and dinner.

That doesn’t seem like much of an operational savings at first glance. Operators typically pay waitstaffers only a few bucks per hour to cover four, five or more tables, with most of their compensation coming from tips. Considering that a restaurant using the Presto system still has to employ waiters to deliver food and smooth out any customer concerns, it’s just about a wash on labor cost.

But maybe these tabletop devices will become an attraction in and of themselves. That was the plan at uWink. The restaurant chain was the brainchild of video game pioneer and Atari founder Nolan Bushnell, who also helped get the Chuck E. Cheese chain off the ground. A touch-screen monitor sat atop each table at uWink, with customers using it to do the same things the Presto, eTab and Ziosk gear lets them do—look at the menu, order food and drink, entertain themselves until the meal comes and then pay their bill. The uWink system included pay-for-play games, too.

The first uWink restaurant opened in October 2006 in Woodland Hills, CA. Units in Hollywood and Mountain View opened in the following years. All are closed now, with the store at the Hollywood and Highland Center being the final one to close its doors, which it did in September 2010.

But uWink hasn’t given up yet. Now it’s selling its technology to other restaurants under the name Tapcode, making it a direct competitor of Presto, Ziosk and eTab. Given the general movement toward self-service—look at how self-service check-in kiosks have become the norm for airlines—you have to think that one of these systems, or perhaps several, should catch on soon.

We know now that uWink was too early with this technology. The question operators face today, given the power and ubiquity of smart phones, is whether it’s too late to go with Presto, Ziosk, eTab or a similar tabletop system.