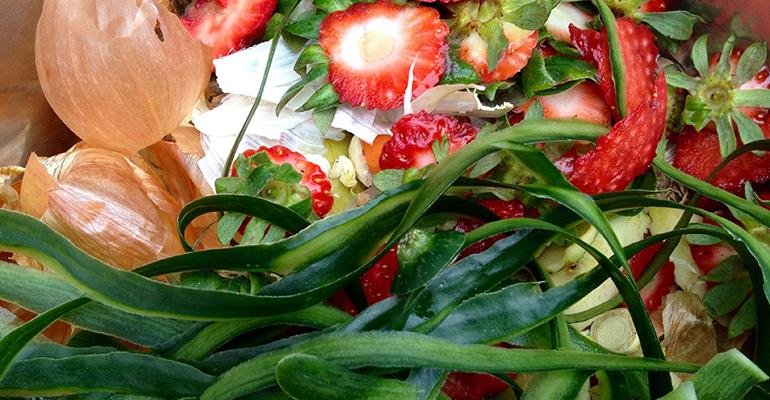 <p>The average restaurant produces more than 25,000 pounds of food waste each year. Finding a way to cut that amount takes some imagination.</p>
Operations>Management

Most restaurant operators are cognizant of the amount of plastic, styrofoam and aluminum that ends up in landfills. But they might be surprised to learn that the average U.S. restaurant produces more than 25,000 pounds of food waste every year.

Clearly, it’s a good idea to try to reduce that amount, and your customers will appreciate your efforts. Here are three examples of restaurants, some small and some large, that are adopting natural methods for combating food waste.

Taking vegetable oil for a ride

Employees and managers of the seven-unit Anna’s Taqueria chain in the Boston area travel from unit to unit in a truck that was converted to run on the restaurants’ used vegetable oil. The 14-foot box truck was converted with the help of a local company that specializes in converting diesel-powered vehicles to run on the used product. The modification was surprisingly affordable, costing only $1,500. “We now fill up the truck with diesel about twice a year, and with the waste vegetable oil about once or twice a week,” says owner Mike Kamio. Every day, waste oil is collected from each unit and filtered for use in the truck.

“It was a win-win not only for Anna’s, but also for the environment,” says Kamio. “We now save about 50 percent from what we used to spend on conventional fuel.” The success of the truck conversion led to the same modification of additional Anna’s vehicles. “We have since converted six additional cars to run on vegetable oil, including the VW Rabbit I drive and the two VW Golfs that two of our managers drive," Kamio says. “With the flip of a switch, [they] transition from diesel to vegetable oil."

A 60-year-old Maine landmark, Bob’s Clam Hut, in Kittery, recently implemented a composting program to help deal with food waste. Bob’s Clam Hut partnered with the Green Alliance in 2011, an organization that advises businesses how to get started. Since then, owner Michael Landgarten says, “we’ve implemented a diligent composting system, made the switch from paper to reusable plastic plates and baskets, and changed over to compostable cutlery.” In addition to dining room bins for trash and recyclables, Bob’s has a bin in which customers can put food scraps (including meat and dairy products) as well as the compostable napkins, paper cups and utensils the restaurant uses. “By composting our paper products, our corn-ware plastic cups and utensils and leftover food, we ensure that these items do not end up in a landfill to contribute to the toxic gas emissions,” says Landgarten. Last year Bob’s composed more than 110,000 pounds of food.

The program was easy and inexpensive to implement, according to Landgarten. “The construction and design of sorting bins ranged from $2,000 to $3,000,” he says. “In addition, we purchased composting bins that the compost company picks up (there is a yearly fee for the service)." The total cost for those was about $600. “We also chose to change over to as much compostable disposable cutlery and plating as possible, which is more expensive than the run-of-the-mill stuff,” Landgarten says.

The move was worthwhile. “We may attract guests who appreciate what we are doing or more likely excite guests we already have…The return on investment is not monetary. However, the return is ecological and environmental,” notes Landgarten.

Woods Hill Table restaurant in Bath, NH, was born of owner Kristin Canty’s “passion for food, family farms, sustainable sourcing and ancestral health.” Part of Canty’s goal in opening the restaurant was to create “a lesson of using all parts of an animal to help combat food waste.”

Canty says, “Since we use animals (pigs, cows and broiler chickens) from our own farm (The Farm at Woods Hill), it very quickly became clear that since we had invested so much into that animal, it only followed that we wanted to stretch it as far as it could go.”

One of the ways Woods Hill Table does this is by frying with beef tallow (a bonus is that this fat boasts high levels of vitamin D and a higher smoke point than many of its peers). The staff also uses organ meat, such as beef kidneys, to make treats for their customers' pets.

In addition to raising her own animals, Canty often finds herself buying other farmers’ stock. “Farmers have told me how much this helps them, and as an owner who’d invested fully in the idea of a sustainable food system, that alone makes it worth it,” she says.