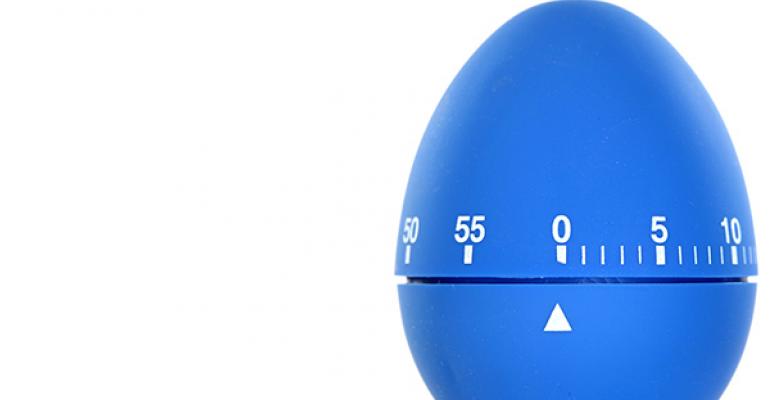 The likelihood of faster table turns is one reason restaurants are adopting tabletop tablet technology and smartphone payment systems at a rapid clip. But there is a no-tech way to produce the same result: fixed-time dining deadlines. That’s what roughly one in five full-service operators in Australia does now. In return for receiving a reservation in the most desirable time slots, customers must agree to vacate their table by a specific time.

Data compiled by Dimmi, Australia’s largest online restaurant reservation site, show that half of the restaurants that impose this policy give customers 90 minutes to finish their meal and pay their bill; 35 percent allow two hours. Operators say this system is in part related to a change in the country’s dining patterns, with earlier evening time periods (5 p.m. to 7 p.m.) having become more desirable. Patrons who wish to stay as long as they want can accept a later seating, with no set deadline.

Economics are the key driver of this policy. “It's not that restaurant owners are less hospitable than they once were," says operator Erez Gordon, whose top-rated nose-to-tail restaurant Bishop Sessa is located in Surry Hills, New South Wales. “The reality is that having a table stay all night no longer generates enough profit to warrant opening the doors."

Operators readily fixed-time dining as an idea whose time has come. It takes the guesswork out of table availability during the heart of a busy night and enables operators to maximize occupancy when it matters most.

Customers, on the other hand, take more convincing. In Australia, most have acquiesced. But there are plenty of complaints, too. Some patrons decry the whole concept of dining against a deadline. Others grouse that early reservations are too early and later ones too late. As is true in the U.S., 7:30 or 8 p.m. on weekend nights are prime times.

Which is why a system like this one might interest some U.S. operators. It seems nearly miraculous that so many Australian operators have been able to make a fixed-time policy stand up. That they have demonstrates that operators can perhaps exploit the supply/demand ratio for their most desirable restaurant reservations more than they have.

One way to exploit it would be to adopt the yield demand pricing dynamics—i.e., charging more for the most desirable seats and flights—that have worked so well for the airline industry. That’s the approach Chicago’s Alinea and a few other super-high-end restaurants are doing with their variable-priced ticketing systems.

But more customers might balk at paying extra for their meal than they would at accepting a fixed-time dining reservation. It doesn’t cost more to eat under the fixed-time dining system, but a customer at least gives the restaurant operator something in return for his prime-time reservation: a guarantee that the restaurant will get that table back at an agreed-upon time to use again. The success Australian restaurants are having is evidence this is a tradeoff many customers are willing to make.