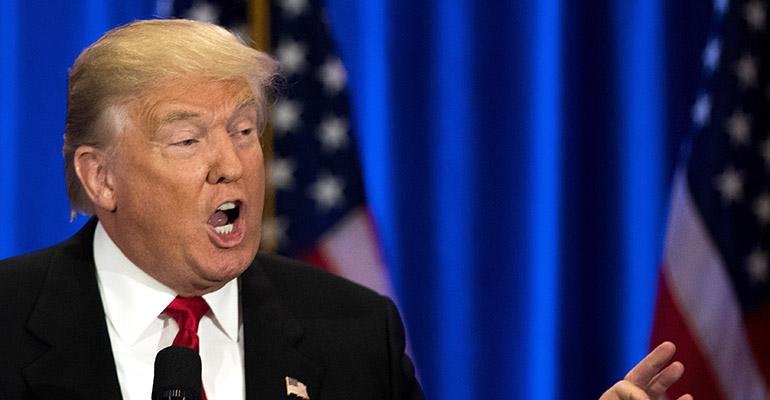 <p>You might not love the candidate, but politics and food do not mix.</p>
Operations>Management

Operators have the legal right to deny service to a polarizing politician like Donald Trump, his supporters or even the police. But, boy, if you want to invite the wrath of  social and traditional media, this is the way to do it. Once you go public with one of these bans, it’s difficult to undo the damage.

We’ll get to Republican presidential nominee Trump in a minute. But first let’s examine what happened last week to the proprietor of Lucky Teriyaki in Sedro-Woolley, WA. First, four county sheriff’s deputies who ate lunch at Lucky’s were asked to not come back. Then the operator made it worse by confirming the ban to the sheriff, asking him to tell other law enforcement personnel they weren’t welcome, either. The supposed rationale: the presence of deputies made other customers uneasy.

The policy attracted national attention in a hurry, and not in a good way.

"I understand a business owner has a right to refuse service if he wants to," Sheriff Will Reichardt told Spokane television station KHQ 6. "I also understand that as customers we all have the right to find some other restaurant to take our lunch break in."

And everyone has the right to go on social media and castigate the restaurant owner, which is that’s exactly what happened. We’ll spare you the most abusive posts and share two that speak to the business implications of this move.

“My husband and I have been consistent patrons of your restaurant over the years. Especially when we used to live close by. Are you expecting to stay in business after such a request? I should think not! Such a shame considering how you were one of the few long-time established restaurants in this town. Might as well shut it down and walk away. Your bottom line just bottomed out,” Jen Bates wrote on the Lucky Teriyaki Facebook page.

So many bad reviews cascaded onto the restaurant’s Yelp page that Yelp temporarily shut it down. Even so, the 808 reviews of Lucky Teriyaki on Yelp now average out to one measly star.

Faced with thousands of negative social media posts plus online and phoned-in death threats, the owners of Lucky Teriyaki reconsidered their position. They sought to explain away the incident as a language misunderstanding and offered to serve free food for law enforcement on July 18.  It may have been too little, too late.

The most high-profile Trump ban came from Cleveland-based celebrity chef Michael Symon. If the Republican candidate shows up at Symon’s flagship Lola, his new BBQ spot Mabel’s or his other Cleveland-area restaurants during the Republican National Convention this week, he won’t get in.

“There’s no chance I’d let him into one of my restaurants,” Symon said during a late June interview on Cleveland radio station 92.3 The Fan in Cleveland. “Anybody that knows me knows that I’m not afraid to speak my mind. This isn’t a Democratic/Republican thing, trust me. It’s just a ‘he creeps me out’ thing.”

Symon’s spots were already booked solid for convention week, so there’s been little backlash from his anti-Trump stance so far. But Cincinnati-based restaurateur Jeff Ruby didn’t get off so easy. Ruby also isn’t afraid to speak his mind, but he’s definitely creeped out by the reaction he drew from what are presumably Trump backers.

Ruby, who runs five restaurants, banned Trump from his Louisville steakhouse during a Trump campaign swing through the Bluegrass State in primary season earlier this spring. Here’s what Ruby said at the time.

“He denigrates women. He disgraces POWs. He disparages the disabled. He badmouths anyone who disagrees with him. He claims to have never heard of (former Ku Klux Klan Grand Wizard) David Duke. He praises Vladimir Putin. He’s as presidential as Cam Newton.” he told a local paper.

Ruby later recanted. "Mr. Trump, I welcome you to have dinner at any of our places," Ruby said on his company’s Facebook page.

Why the switcheroo? The Louisville Courier-Journal reported it this way.

"People went crazy," said the 68-year-old, cigar-chomping restaurateur of his tweet to 40,000 followers on Twitter the day of the Louisville Trump rally February 29. "They flooded all the ratings systems online. They sabotaged our reviews. And then they were calling all the restaurants and yelling at the hostesses answering the phones."

“I didn't want any more visibility about Trump," Ruby said. "It was about the death threat."

Death threat? Whoa. No wonder experts suggest your restaurant keep a low public profile on controversial issues and find an alternative method to show your support.

“Loudly declaring your political affiliation or proclaiming yourself ‘anti’ anything can alienate customers,” advises small business expert Cindy Perkins. “Patrons who don’t appreciate your opinion may take their business elsewhere. Save political support for private functions and keep the public focus on positive, neutral topics—a local athletic team, animal shelter or community members serving their country in the armed services.”

Researchers at the Georgetown Institute for Consumer Research looked at this issue and came up with a similar recommendation. Their restaurant-specific study, “Politically Charged: How Taking a Political Stance Affects Consumers’ Valuations,” reached a similar conclusion.

“The results suggest that taking a political stance is unlikely to be beneficial,” the study says. “If a business is compelled to state something, expressing a neutral position, or announcing support for charitable organizations, may be the best course of action. This finding held regardless of whether the political issue was healthcare, reproduction rights, gun control, or military spending.

“Further, even if a business’s consumer base is homogenous and it is able take a political stance that the overwhelming majority supports, the data suggest promoting charitable giving can achieve the desired results without increasing risk. Thus, while there has been a recent trend among businesses and corporations to openly support specific social movements and political issues, it may be most beneficial to act Swiss and remain neutral.”