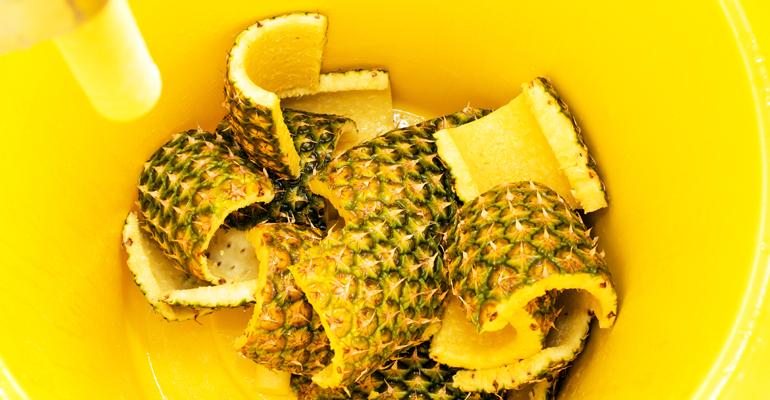 <p>Many scraps can go into restaurant dishes, but Items like pineapple skins might find their way into animal food or energy production.</p>
Operations>Management

Thomas McQuillan at Baldor Specialty Foods would love for the restaurant world to stop thinking of food waste as garbage.

A large produce and specialty food distributor for the Northeast based in New York, Baldor processes more than a quarter of a million pounds of produce each week. That process produces tens of thousands of pounds of what have long been called trimmings, scraps, peelings or byproduct: carrot tips and greens, celery cores, fruit skins, fennel shavings or ugly potatoes.

As a business analyst for Baldor, McQuillan was given the challenge of addressing that massive load of waste. Previously, the company was forced to pay to have it trucked to a landfill.

Now McQuillan sees that byproduct as something else entirely: an opportunity.

Baldor in early December launched a new multitiered program called SparCs—that’s “scraps,” spelled backwards and pronounced “sparks.” The program is designed to divert useable food waste to restaurant chefs who could use it in various ways, to make broth, juices or salads.

Food waste is increasingly being positioned as a climate change issue.

In the U.S., food is the largest component of municipal solid waste and accounts for a significant portion of methane emissions, according to the U.S. Department of Agriculture and the Environmental Protection Agency, which earlier this year revealed goals to reduce food waste by 50 percent within the next 15 years.

The USDA’s Economic Research Service estimated in 2010 that food loss and waste account for about 31 percent or 133 billion pounds of the overall food supply, worth about $161 billion. Reducing food loss by 15 percent would provide enough food for more than 25 million Americans every year, the agencies projected.

That’s something companies like Baldor—and restaurants—can do something about, McQuillan says.

It’s early for SparCs, but McQuillan hopes to build a client base of restaurant chefs and manufacturers that can use Baldor’s byproducts.

“The response has been overwhelmingly positive,” he says. “We’re now developing standard operating procedures to capture the material here so it’s treated in a safe way.”

So far, Baldor is working with Misfit Juicery, a Washington, D.C.-based manufacturer that makes cold-pressed juices from irregularly shaped and surplus fruits and vegetables, for example.

McQuillan said the program is also supplying Marco Canora’s restaurant Brodo with SparCs product to make broth, and though the WastED pop-up is over, Baldor is supplying some ingredients for a “Dumpster Dive” salad that’s sometimes on Blue Hill’s menu.

In a second tier of the SparCs program, what can’t be used for humans could go toward feeding animals. Baldor is hoping to divert some product to farms throughout the region for animal feed.

Finally, for what is not fit for human or animal consumption, Baldor is also looking at using anaerobic digestion, which is essentially a system of collecting and harnessing the gas released as organic matter decomposes as an energy source.

In one example, Baldor is working with a local water processing plant that is looking to collect 20,000 pounds of organic matter per day, starting in March, to mix with human bio-solids to generate methane gas for energy.

McQuillan hopes to reduce Baldor’s food waste to zero by April of 2016.

The move is good for the planet, said McQuillan, but it also is expected to be good for the company’s bottom line.

Not only does SparCs offer a potential revenue stream, it eliminates the cost of hauling waste to the landfill, which is typically 5 cents to 8 cents per pound for the industry, he said.