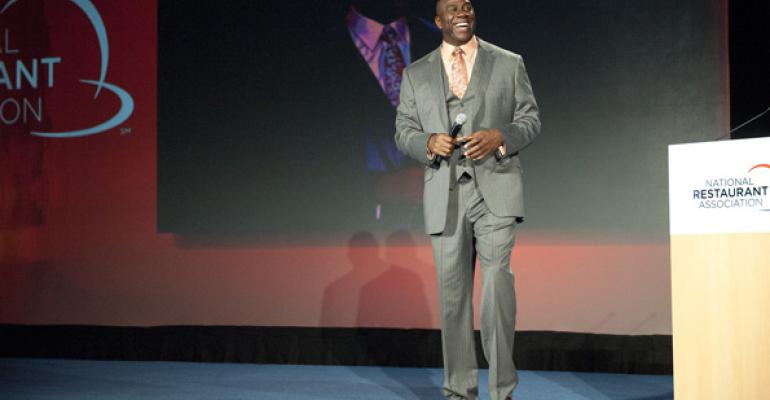 The magic of customer engagement

Early on in the process of opening 125 Starbucks locations in urban communities across the U.S., Earvin “Magic” Johnson decided to take out the traditional coffeehouse tunes and replace them with albums from Lionel Ritchie, Smokey Robinson and other African American artists. He ditched the scones and instead stocked sweet potato pie.

The NBA legend, entrepreneur and philanthropist learned early on in his business career that a clear understanding of his customers would be critical to success.

“I understand what minorities want and I deliver it to them, and that’s been the key,” Johnson told a packed ballroom of National Restaurant Association Show attendees during his keynote address Sunday. “Everything I do is about the customer. It’s never about me; it’s always about my customer.”

This dedication specifically to the minority customer has brought Johnson great success across multiple ventures, from sports and telecommunications to theater and foodservice. In restaurants, he noted, “the biggest thing is the customer experience — not just having a great meal but having a great experience at the same time.”

Johnson described his decision to invest in Starbucks as the “boldest move I’ve ever made.”

After realizing that Starbucks had units on “every corner” in affluent neighborhoods across the U.S., Johnson met with Starbucks CEO Howard Schultz and pitched growing the coffee chain throughout urban America. Schultz wanted to get a sense of how Johnson ran his businesses, so he visited Johnson in Los Angeles for the premiere of Whitney Houston’s “Waiting to Exhale” at one of his Magic Johnson Theaters.

“He was coming to urban America. I tried to tell him minorities go to the movies a little differently,” Johnson said. “After the movie, Howard pulled me out of the theater and said ‘Magic, I’ve never had a movie experience quite like this.’ But he saw the great customer service. He saw we kept it up very well.”

Johnson and Starbucks initially partnered to build three stores. In those three stores, Johnson’s spend per customer was $4.59, greater than the $4.51 average across the brand, he said.

“You’ve got to over-deliver to your customer,” Johnson suggested. “If you over-deliver, you’re going to get the attention you’re looking for.”

Johnson cashed out of his Starbucks venture after building 125 units. He said his success in the theater business has been built on the same principles. He knew minorities enjoyed eating at the theater rather than going to dinner before the movie, so he enhanced the food experience and stocked larger quantities.

“Whatever it is your selling, you have got to deliver that on a consistent basis,” he noted.

Outside of customer service, Johnson offered these tips on running a successful business:

Johnson also noted that when the success comes, he gives back to the community.