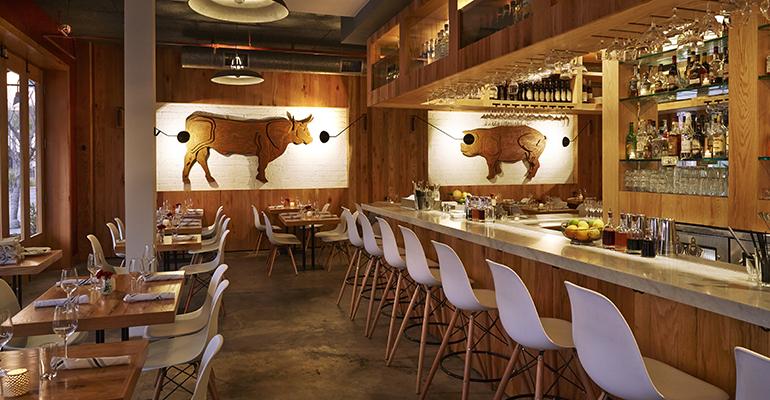 The lowdown on relocating a restaurant

The Los Angeles restaurant Salt’s Cure reopened in December in a new, bigger location after a five-week shut down.

The move came after five years in a West Hollywood spot limited to 34 seats without a full liquor license.

In its new digs, not far away in Hollywood, chefs and co-owners Zak Walters and Chris Phelps have doubled the size of the restaurant and added an outdoor patio. Full bar service is now available and the concept has expanded its menu to showcase more of the local ingredients and house-butchered meats that have been the core focus since the beginning.

Still, for restaurant operators thinking of making such a move, Walters has this advice:

Don’t do it. Unless you really believe a move will raise the level of service your restaurant can provide.

“I don’t think I can really recommend the approach of closing down and expanding,” he says. “It took a long time for us to talk ourselves into it and the risk is far greater than the reward can be.”

Despite the risk, however, Walters says it was the right move for Salt’s Cure. In the former location, the restaurant was never really able to become the concept it was originally designed to be, he said.

In the former space, it developed a surprisingly strong breakfast and lunch business, for example, and was “decently profitable” with a great following, he notes. But dinner was fundamentally weakened by the lack of a full bar.

“The old space was cramped and we didn’t even have air conditioning for a year and a half,” he says. “In a 30-seat restaurant, it’s extremely hard for owners to create profit. For Chris and myself, two owners who are most directly involved, we needed a little more reward or bang for our buck.”

The move has allowed the concept to grow up a bit from its earlier startup mindset, he said.

The new location offered a better lease, for example. But because the dining room is bigger, the partners hired more staff. As a result, they were forced to get up to speed on healthcare, meal breaks other mandates for larger employers.

“Our old staff was more comfortable as a 10-person staff, more of a family,” Walters says. “There have been growing pains in realizing now that everyone is held more accountable.”

He adds that the restaurant was able to keep many of its employees because they kept breakfast and lunch going at the former location as long as possible, even though dinner service had stopped about a month earlier to start the transition. “Our bookkeeper would have rather we closed completely, but that was more important,” he notes. “We lost very few.”

Adding the bar meant a big investment in permits but Walters says the beverage program, including an expanded wine list, will be very lucrative. “Anytime you add on bar to your concept, you’re doing it first and foremost for lucrative reasons, you’re not doing it for the craft of it,” he says.

Salt’s Cure can offer bloody Marys and other cocktails at brunch, which has become a greater emphasis. The restaurant no longer does breakfast seven days a week. Dinner now includes the option of specialty drinks like the Pearson Buck, with pear brandy, elderflower liqueur with lime, ginger and seltzer; or the West Point with Jamaican rum, rye whiskey, lemon juice, honey, bitters and nutmeg.

Walters and Phelps also plan to expand the brand in ways that a 2,200-square-foot kitchen will finally allow.

“When we first came up, we wanted to be almost more on the wholesale side with specialty products,” he says. “Now we have room to add more equipment to expand the idea of wholesale.”

Walters believes a key aspect of a successful move is talking with customers early on. For Salt’s Cure, social media has been one tool, but the restaurant also printed postcards explaining the transition that servers delivered to tables with the check, starting about six months before the closure.

“We’re lucky enough for some publications to like us, so they also had some chatter (in the local press),” he says. “But touching tables is the most important.”

Fundamentally, moving locations should only be considered by concepts that are successful and have some buzz. Moving won’t save a restaurant that won’t survive where it is, he notes.