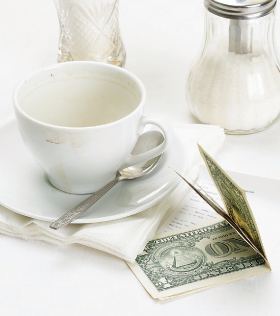 In the August issue, Marc Dysinger, the owner of Sneakers Bistro in Winooski, VT, asked readers of RH how they fairly compensate their kitchen staffs. He wrote that his kitchen staff is disgruntled over the inequity in pay between the front and back of the house. He suggested that his back of the house share in a tip pool. Here are some responses from readers.

On January 1 of this year, we became a non-tipping establishment. We adjusted servers and front-of-the-house staff to have a better balance of wages throughout the restaurant, including back of the house. We also adjusted prices to cover the increased labor costs. As expected, we did experience some turnover in the dining room, but overall we feel that we have developed a much better team approach to service. As new employees are hired, they understand that they will make a decent constant hourly wage, regardless of the season, day of the week or shift. They also know they will be expected to work as a team member. Customers have reacted both negatively and positively, but we feel our new policy is the way the industry is headed.

My advice to Marc would be to create a transitioning position for your cooks to move up the ladder. I agree that the BOH staff is much harder to replace than FOH. However, a disgruntled staff is far worse to have and handle. I’ve found that the food runner or busser positions are the perfect way to transition BOH to FOH. Also, when doing this, management must make it known to the entire staff that this is happening because of the work and effort that the BOH employee has done and not out of fear of losing employees.

We stumbled on the perfect fit for our establishment. Each day we schedule a kitchen employee to prepare a family meal. The person is usually given some basic guidelines of what they can and can’t use and are then left to be creative. Each employee, minus the dishwasher (since he has to clean up all of the mess from the family meal and has the hardest job in the place), pays $2 for the meal, which the cook keeps. Each week we rotate who cooks on which day so that everyone will get to prepare a family meal on a weekend which of course yields the biggest take since we are staffed up for extra business. This gives the cooks cash in their pockets and makes them feel as though they are getting a bit of extra pay. While it doesn’t close that money gap completely, it helps a great deal with moral and keeps the ever present topic of financial equality at bay.

Here at the Inn we pay very well and expect very high performance from all of our kitchen workers. I try and recognize when all of our workers do well and give credit when due. Whenever I have cash in my pocket, very infrequently, I try and pass it off to one of my servers. This morning I found a $50 in my pocket, and I passed it to Hannah, one of our dishwashers coming in when another worker called out.  Also I fuel them in the warm months with gatorade and ice cream treats that we don’t offer to the servers. I will also send one of our back of the house home with miscut portions or off cuts from when we break primals down. He’s a single father washing dishes for $9.50 and I know he appreciates it. I also think that offering perks like that will cut the urge to steal.  We also allow the kitchen staff their shift drinks in pint glasses, not something that we offer the servers, who get beer and wine. You have to make sure they know their hard work and sweat is as valuable as everyone else’s, including my own.

Kitchen workers get compensated the same if they feed 10 guests or 100 guests. Sometimes their workload is a bit lighter than front-of-the-house workers in an eight-hour day, depending on cover counts. FOH compensation is directly proportionate to the number of guests they serve. On slow nights, they get less money; on busy nights, they make big money. Create incentives for the BOH, such as health inspection scores, no re-cooks, reduced waste and guest comments. Reward them with monthly monetary incentives. Create a friendly environment between FOH and BOH. Our team brings cookies, sodas and candy for the BOH. On busy nights, servers have been known to throw some cash at the broiler man and dishwasher at the end of the night.

A wait staff works primarily for tips, and that’s the way it should be. Conversely, kitchen personnel are hired and paid at a competitive hourly rate or salary and they are fully cognizant of this upfront. The only exception, in my opinion, for sharing gratuities with kitchen employees is with banquets and private parties where an automatic 18 percent guaranteed gratuity is added and the actual bill exceeds a set amount.

For instance, if the bill is a minimum of $1,500 (or an agreed upon smaller or larger amount), the waitstaff should receive 15 percent ($225) and the working kitchen staff that actually prepares and works the banquet should receive 3 percent or $45, which should be distributed in cash by management. This is fair and should be acceptable.

For additionally compensating kitchen staff consider paying weekly bonuses based upon the restaurant’s business revenue exceeding the weekly sales goals along with the kitchen staff achieving their budgeted food and labor cost percentages. All independently owned and operated restaurant businesses should have daily, weekly, monthly and annual sales goals.