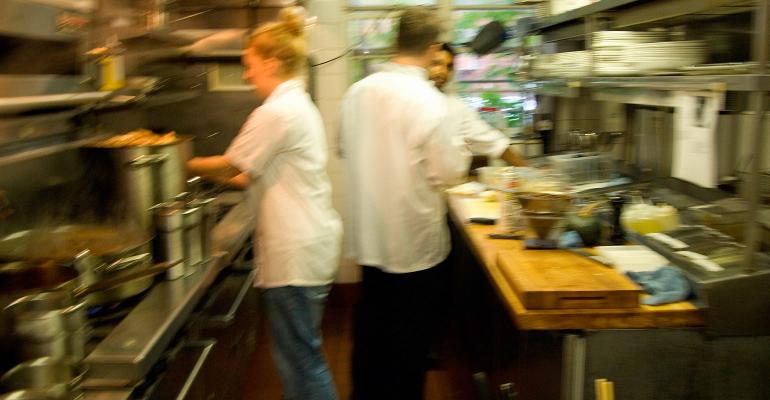 Department of Labor cracks down on unpaid restaurant internships

A recent U.S. Department of Labor crackdown on an unpaid internship program at a Seattle-area restaurant is a cautionary tale for the industry.

The Willows Inn on Lummi Island, near Bellingham, Wash., has agreed to pay unpaid overtime and damages totaling $149,624 to 19 kitchen workers who participated in an unpaid internship, or stage, at the restaurant.

While stages are common in the industry, and many chefs boast about working for high-profile chefs, often for free, DOL officials disclosed The Willows Inn settlement in part as a warning.

“We hope this case can educate others in the high-end restaurant world that ‘staging,’ while common, is unfair to workers, and it is illegal,” said Jeanette Aranda, director of the DOL’s Wage and Hour Division in Seattle. “This case allows us to level the playing field for employers who play by the rules by complying with the law. We are dedicated to educating and protecting both workers and employers.”

In the case, the DOL argued that Freshore Hospitality LLC, doing business as The Willows Inn, violated the Fair Labor Standards Act by failing to pay overtime and minimum wage to entry-level kitchen staff who worked for one month as a free try-out before they were considered for paid employment.

Once on payroll, the workers were paid daily rates from $50 for up to 14 hours per day, with no consideration of weekly overtime, the DOL said.

As part of the settlement, The Willows Inn agreed to end its stage program and pledged to comply with federal labor laws in future.

The Willows Inn’s kitchen is headed by chef Blaine Wetzel, who notes in a biography on the restaurant’s website that he began working in kitchens at age 14, and that he studied and apprenticed at René Redzepi’s esteemed restaurant Noma in Copenhagen.

“These were passionate individuals who sought us out for the opportunity to stage at The Willows Inn,” the statement said. “All were volunteering chefs, some were compensated in [a] variety of ways, including daily rate and lodging. Once we were informed by the Department of Labor that the practice of staging was illegal, we ended the program immediately.”

But are stages or unpaid internships always illegal?

Not necessarily, according to attorney Catharine Morisset, a partner in Fisher Phillips’ hospitality practice in Seattle, who was not involved in the case. But there are still lessons to be learned.

“The stage, or the stagiaire program, is a long-honored tradition for people in the industry to learn kitchen work,” Morisset said. “But in the U.S., we’ve got a problem, which is the default rule is there’s no such thing as a volunteer for a for-profit organization.”

That’s not to say unpaid internships are impossible, she said.

Federal labor laws define the term “employ” broadly as to “suffer or permit to work.” So most internships in the private sector would require compensation for services, unless they met a test that includes six criteria:

1. The internship must be similar to training in an educational environment. In general, an internship will be viewed as an extension of education when a college or university oversees the program and offers educational credit.

2. The experience must be for the benefit of the intern.

3. The intern cannot displace regular employees but works under close supervision of existing staff. For example, if the employer would have hired more workers or given existing workers more hours if not for the intern, that’s a problem.

4. If the employer providing the training derives no immediate advantage from the intern’s activities and may sometimes be impeded, it’s more likely to be viewed as a bona fide educational experience. In other words, interns should perform no or minimal work.

5. The intern is not necessarily entitled to a job at the conclusion of the internship. In addition, internship programs should not be used as a trial period.

6. Both the employer and the intern must understand that the intern is not entitled to wages for the time spent in the internship.

In addition, Morisset warned that restaurant operators should review any state laws that might also govern internships.

Establishing strong partnerships with local education programs is key to creating a program that can give young chefs kitchen exposure, without having to put them on the payroll, she said.

For example, The Culinary Institute of America offers culinary externships in restaurant kitchens that are part of credit-bearing coursework.

“The college educates each potential extern host by prominently listing the DOL criteria to which they must adhere directly on the application to become an educational partner for the course of externship,” said Ronald Hayes, associate director of the CIA’s Center for Career and Academic Advising.

Many students also pursue a stage, which Hayes called a “short-term working interview,” on their own, he said. But the CIA doesn’t assist in that process, and stages are not part of the school’s degree program.

Chef and restaurateur Suzanne Tracht, owner of the Los Angeles restaurant Jar, sees both sides of the coin.

“People call me and want to do a stage, but a lot of those aren’t so hands on. They just want to see what you’re doing. They might come in for a few days to watch,” she said. “But if someone wanted to come in for a month or a year, I would put them on the payroll.”

It’s not fair for other restaurants to use unpaid labor when small businesses like hers pay required wages, taxes and workman’s compensation for her staff, Tracht said.

“Why shouldn’t they?” she said.

Still, Tracht also remembered how valuable time spent in a well-run kitchen can be when a chef is just starting out.

When she did a paid apprenticeship three decades ago at a five-star hotel, there were plenty of nights when she’d work off the clock just to be a part of a special event and gain experience, she said.

“And I was happy to do it,” Tracht said. “If a chef like Joël Robuchon had asked me to come work for him, I would have said ‘Sure!’ I wouldn’t have asked how much I’d get paid.”