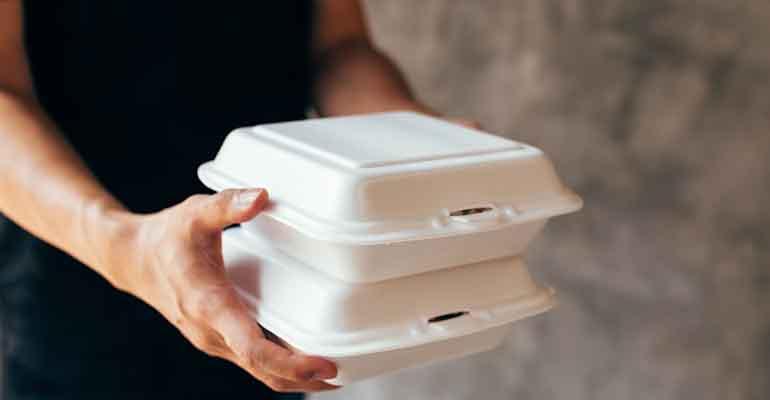 Restaurants would be limited to recyclable, compostable containers for to-go packaging

The Chicago city council is considering legislation that would ban polystyrene to-go food containers and limit single-use plastics in restaurants.

Estimating that 22 million pounds of plastic enters the Great Lakes every year, the “Plastic-Free Water Ordinance,” introduced Wednesday by Alderman Scott Waguespack, would give restaurants in the city until Jan. 1, 2021 to stop using polystyrene containers.

In their place, restaurants will be required to use reusable dishes for dine in, and recyclable or compostable containers for to-go orders. Food vendors would also be required to provide color-coded bins for waste collection, including blue for recyclables, green for compostables and black for landfill.

In addition, disposable utensils and plastic straws could only be provided by request or at a self-service station — but those disposable items can’t be wrapped in plastic, as is common for plastic utensil sets.

Under the proposal, restaurants must also provide a way for consumers to specifically request disposable foodware, like utensils, for takeout orders, through an ordering app or website, for example.

Consumers would be allowed to bring their own reusable cups to restaurants, but the ordinance would give restaurants the option of refusing it if the cup is dirty or appears unsanitary.

The ordinance would offer full or partial waivers to businesses that aren’t able to either wash dishes or contract out that work.

Sam Toia, president and CEO of the Illinois Restaurant Association, or IRA, said the ordinance would add to the cost of running restaurants in Chicago.

“The IRA supports restaurants’ efforts to voluntarily decrease their environmental footprint in ways that work best for their brands and customers. However, restaurants also face massive legislative and regulatory burdens — such as a higher minimum wage, paid sick leave and Fair Workweek rules — that result in average profit margins that are already pennies on the dollar. Any proposed regulations on plastics need to consider the additional financial hardships that will be placed on operators and the implications for safety and sanitation, customer requests, drive-through areas, medical necessity of plastic foodware and other considerations,” he said.

Polystyrene bans have reportedly been approved statewide in Maine and Vermont, and New York and New Jersey are considering similar legislation. Roughly 200 municipalities have also banned the material, including New York City, San Francisco, Los Angeles and various other cities in California.