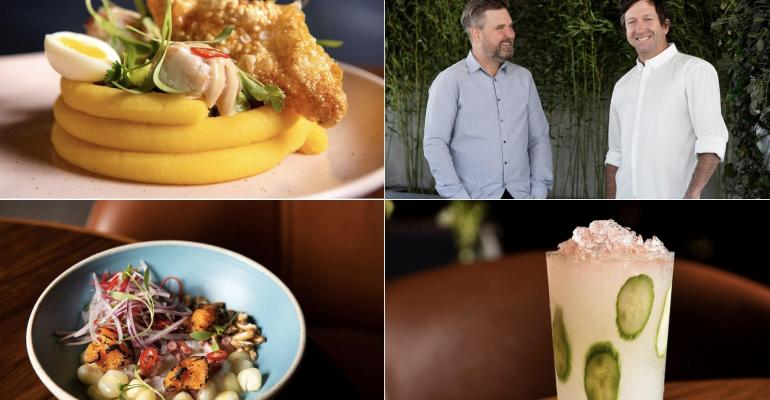 Ian Schrager, co-creator of Studio 54 and well-known hotelier, has unveiled the newest restaurant at Public in NYC: Popular, complete with Peruvian fare and headed by chefs Diego Muñoz and John Fraser. The restaurant, along with a new cantina/bar and a gourmet food bazaar, opened to the public last week.

“Never before have two chefs of such world renown collaborated to bring a luxurious, multicultural, culinary experience to New York City,” Schrager said in a statement.

The hotel’s main restaurant Popular is helmed by Muñoz who comes to New York from Peru. The menu is a culinary tour of Muñoz’s home country, including Peruvian/Chinese dishes, along with elements from Incan, Spanish, Moorish, African, Italian, Chinese and Japanese cultures.

“It has always been my dream to cook in New York City, a place that I adore for its non-stop energy and incredible culinary diversity,” said Diego. “I am honored that Ian Schrager chose me to present my country’s rich and multifaceted cuisine at Public, the execution of which would not be possible without the local knowledge, expertise and infrastructure that Chef John Fraser and his team bring.

“I’m also excited to share Peru’s incredible cocktails,” he continued. “When I worked at elBulli with Chef Ferran Adrià, the restaurant had no bar. All the cocktails were created in the kitchen as a logical extension of the cuisine. I’m honoring this tradition at Public.”

Chef Fraser, New York restauranteur and owner of Iris, 701 West and now-closed Michelin-starred vegetarian restaurant Nix. Fraser is known for his use of vegetables and flavorful vegetarian cuisine in New York City.

“My position here is to open the window to New York for Diego to see out of,” Fraser said at a press event celebrating the opening.

“It’s healthy food. [Chef Diego] didn’t want me to call it that because of the name but it’s fish and vegetables. It’s healthy but delicious,” Schrager said at the opening event.

Popular will have indoor and outdoor seating at the Bowery Garden, the outdoor section of the hotel.

The bar is preparing 36 kinds of housemade Pisco Macerados (infusions), including strawberries and anise; watermelon; raisins and currants; pineapple and sage; juniper and orange; rose petals and lime zest; and coffee. The infusions will be used in creative cocktails like the daily specials.

After 10 p.m., Cantina will host a DJ for live Latin music and dancing daily.

The last element of the newly redesigned food scene at Public is Louis, a global food bazaar. The food at Louis was curated by Fraser from Muñoz’s expansive culinary menu meant to embody Peru and New York City’s Lower East Side, where the hotel resides.

This menu is less expensive with food ranging from $8 to $22.

Schrager, who has been credited with co-creating the “boutique hotel” concept and was the co-founder of Studio 54 said the inspiration for redesigning the food program after COVID wiped out the hotel industry was the pandemic itself, along with the resiliency of New Yorkers.

“We put a lot of money back into this hotel because we knew things would go back to normal. Not the new normal, but normal,” Schrager said at the opening.