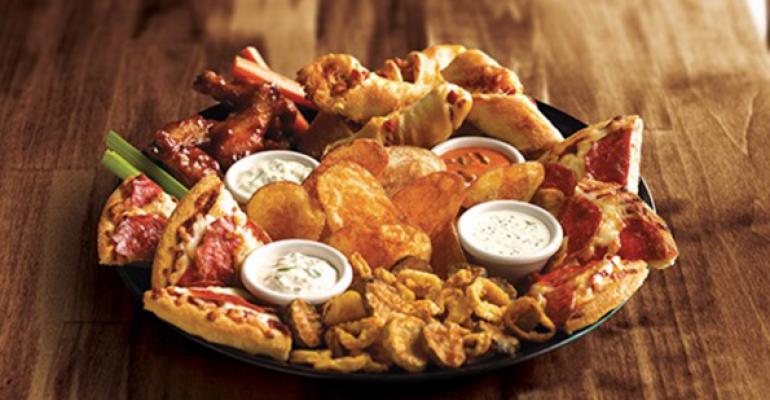 Upselling appetizers during the holidays

As the year winds down, the season for appetizers winds up for restaurant and foodservice operators.

“Our mini party trays by far are the largest seller during the holidays,” says Adam Terranova, marketing manager for Philly Pretzel Factory, the Philadelphia franchisor of more than 100 locations, primarily in the Northeast. “We become the party tray headquarters.”

Customers call ahead, often on their way to a party, to pick up trays of the concept’s salted or unsalted freshly baked pretzels and dipping sauces.

“This is our big time when people get to taste our product for the first time, thanks to our fans bringing it to parties,” Terranova says.

The holidays, school breaks, vacations, family get-togethers, sporting events, parties and more parties release a pent-up demand among customers for appetizers. Restaurant and foodservice operators are taking advantage of the season to offer a wide variety of hors d’oeuvre, small bites, hand-held goodies and shareable dishes. This time of year, customers are more willing to spend, more adventurous and more interested in indulgences, according to operators.

“People take the guardrails off their personal spending, and they tend to order more appetizers,” says Tim Matousek, vice president of operations for Boston’s Restaurant & Sports Bar, a Dallas-based casual-dining chain with more than 40 locations in the United States and Mexico and over 350 in Canada.

Often holiday celebrations and get-togethers center around Happy Hour, so Boston’s rolls out specialty cocktails — Jack Holiday Cider and Santa Rita Hero Salute — as a more robust offering to accompany highly flavored appetizers on the menu, such as a flight of mini pizzas, bacon-wrapped sirloin, or spinach and artichoke dip. Large groups also may choose the Team Platter, which is a sampling of several dishes and is perfect for sharing, Matousek says.

The more indulgent an appetizer, the more popular it will be at this time of the year, says Jim Hoban, executive chef for Four Corners Taverns Group, a Chicago-owned hospitality company that manages several casual-dining concepts, including Highline, Benchmark, Trellis and WestEnd.

“People aren’t as conscious about the calories during the holidays,” Hoban says.

Some of the Four Corners restaurants, such as Highline, offer a “Tot-Cho Bar” which features a cheese fountain and deep-fried potato tots. The house-made seasoned tots are either salted or include bacon. Customers can make their own plate with such toppings as lettuce, tomato, onion, jalapeño, guacamole or sour cream, along with the cheese.

Other popular appetizers include mini-burgers, mini corned beef sandwiches, buffalo rolls and dips such as humus and guacamole, Hoban says.

“We seem to sell a lot of things that are small and can be shared,” he says. “You also don’t want to do anything messy as an appetizer or for catered parties. No one wants buffalo sauce all over their face.”

A popular hand-held appetizer is Four Corners' Lollipop Lamb Chops. Chefs roast a rack of lamb and then separate the meat into individual chops, and serve them with a chimichurri sauce. Customers can hold the chop by the bone, which makes the chops easier to eat and cleaner, Hoban says.

Appetizers have evolved over the years to include more dishes with fewer calories or that are vegetarian, notes Matthew Mantini, director of product development for Sodexo USA in Gaithersburg, Md.

“Twenty years ago catering menus for holiday parties had a lot of heavy appetizers — carving stations, pasta stations,” Mantini says. “Today, people are still looking for bold flavors and taste, but they are wanting lighter fare.”

For the holidays, Sodexo launched a Latin-inspired appetizer menu for clients, which include businesses, hospitals and colleges. The dishes are flavorful but lighter than more traditional appetizers. Among the offerings are acarje — fritters made from dried black-eye peas. After soaking the peas overnight, they are pureed in a food processor with white onion and pepper. The fritter dough is then rolled into a ball and fried. The fritters are served with a vegetarian mayonnaise of cilantro, green pepper and jalapeño.

Other appetizers are two-styles of Mexican empanadas. One is filled with shredded chicken that has been poached with onions and garlic in cilantro leaves. The other is filled with shredded pork that has been flavored for four hours with a rub. The meat is steamed in banana leaves and, after it has cooled, stuffed into the empanada wrap. The empanadas can be partially baked and then finished on site for catered affairs.

Another economical appetizer is a Salvadorian dish called papusa — handmade corn cakes. Dough from corn tortilla flour is stuffed with Mexican cheese and cooked on a flat top. These also can be finished in the oven on site.

“People tend to be more adventurous during the holidays,” Mantini says.

But whether party-goers are indeed looking for an adventurous dining experience or perhaps something that is a little more familiar, operators are finding that a well-considered array of appetizers can help keep their customers merry during the holiday season — as well as boosting the bottom line.