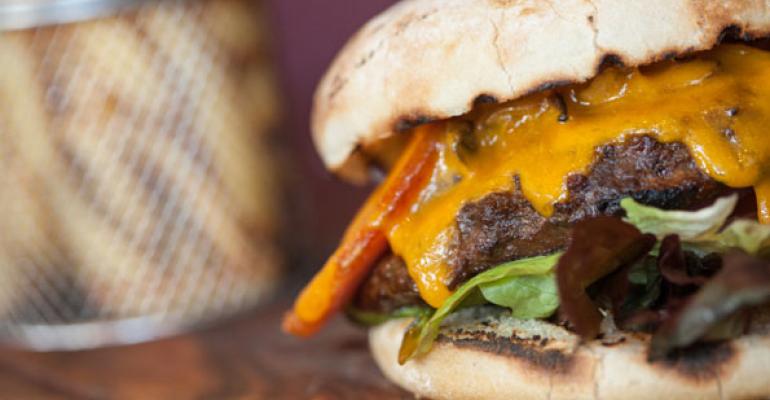 No pink slime controversy is going to slow down Americans’ appetite for a damn good burger.

Seems as if we’ve been writing about chefs getting creative with the hamburger for the better part of three years. But the better burger movement isn’t slowing down, meaning it’ll take a really standout burger to be a cut above the rest.

Burgers dominate in the QSR segment, continue to shine in the casual segment and are now busting at the seams in the fast-casual space. Despite a slight slowdown in overall burger sales growth in 2013, fast-casual better burger chains grew 10.4 percent that year, according to data from Technomic.

Habit Burger’s parent company raised $90 million in an IPO last week, with its share price jumping from $18 to more than $40 per share in one day. The California-based Habit Burger currently has 104 locations in California, Utah, Arizona and New Jersey; the company plans to open 26 to 28 locations and begin franchising in 2015.

A recent CNBC report looks at whether the rapidly growing gourmet burger segment has peaked, concluding there have been some recent hiccups but a ton of success stories as well.

Consultant Andrew Freeman of Andrew Freeman & Co. is so optimistic about the future of the burger that he called the patty melt the “sandwich of the year” in 2015.

“It doesn’t get much better than buttery toasted rye, melty cheese and a juicy beef patty,” he says in the company's 2015 Trends Report. “That’s the beauty of a patty melt—part grilled cheese, part cheeseburger, the whole is greater than the sum of its parts.”

• Parm in New York City only serves them on Tuesdays, but offers an “intensely beefy, dry-aged LaFrieda patty well worth thinking about all week”
• Park in Cambridge, MA, has one so popular that Boston Burger Blog readers declared it the best burger in the city.

If you’re not already serving the best burger in your neighborhood, you have some catching up to do. Last summer, Restaurant Hospitality offered chefs some insights to consider when adding a better burger to your menu:

• The sesame seed white bun is the most popular (50 percent), nosing out the plain white bun (49 percent) and wheat bun (48 percent).

• Beef (82 percent) is the favored protein, over turkey and chicken, both at 53 percent.

• American cheese is still the top choice at 73 percent, followed by cheddar (66 percent) and swiss (55 percent).