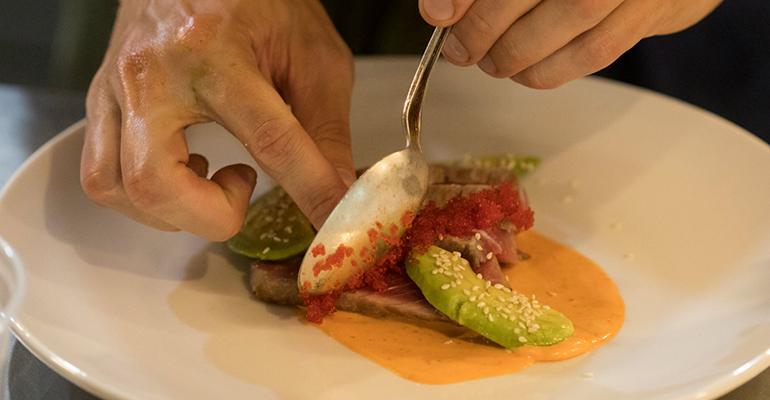 Chefs are creating affordable and approachable experiences for a broader audience

The chef’s table or tasting menu, popularized in America by chef celebrities like Thomas Keller and José Andrés, call to mind an exclusive, four-hour experience with a $300-plus price tag. However, that format — which has long been a favorite of the upper echelon of dining enthusiasts — shuts out a majority of the U.S. population.

Now chefs and restaurateurs are rethinking their tasting menus with the goal of putting the intimate dining experience in reach of more potential guests.

At Ice House in Minneapolis, for example, chef Matt Bickford eschews the traditional idea of a chef’s table in favor of a casual spin-off that he’s dubbed the “chef’s bar,” which he launched five years ago. While customers at the casual American eatery can still opt for a more conventional $75 tasting menu, the chef’s bar is pared down to just the basics: multiple off-menu courses and up-close interactions with the food-making process, all for just $35 for five courses or $50 for 10 courses. 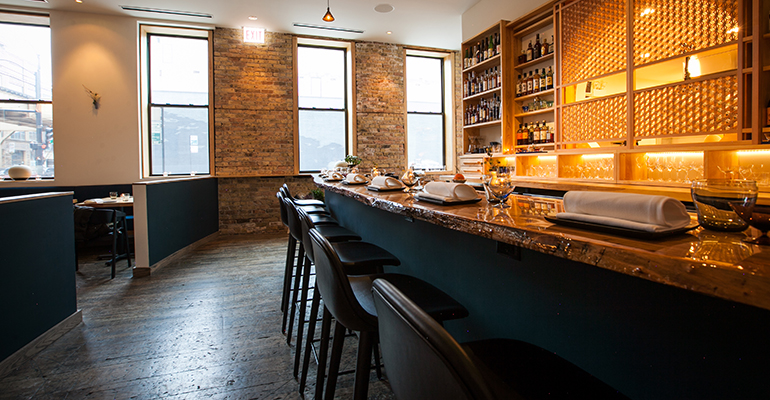 “People want to eat more than just the traditional big salad, meat, dessert and go home, but that kind of creativity has previously been relegated to the white-linen-tablecloth setting,” Bickford said. “We’re not pretentious. You’ve got a chef and a bartender handing you plates. It’s less intimidating and more fun and playful.”

Customers who choose the chef’s bar will get to try dishes like a pastrami short rib braised and marinated for 72 hours, veal ribs with truffle honey, and bluenose bass, all while sitting at a barstool and watching the live entertainment offered every week by Ice House, including jazz, reggae and indie rock acts.

The challenge for businesses is providing exemplary service and food at low prices while still turning a profit.

Bickford admits that while the tasting menu has a “shrinking margin,” they manage to keep costs down by refusing to waste food and overlapping ingredients across multiple menus.

“If I’m cooking pork belly that day [for the a la carte menu], chances are it will end up on the chef’s bar menu,” Bickford said. 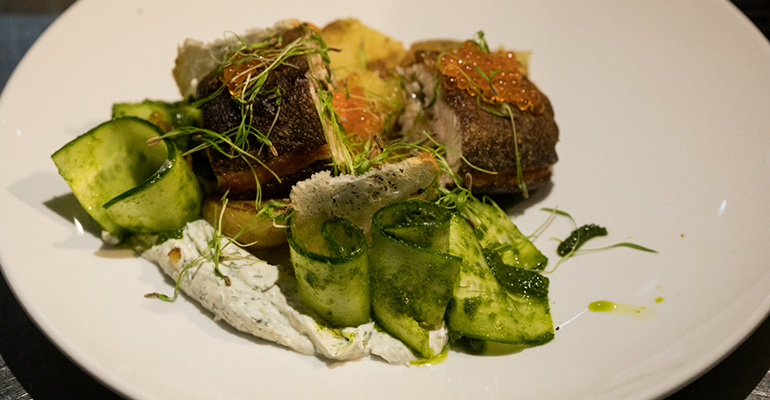 Some restaurants are also positioning their tasting menus to be more everyday events, not just for a special occasion.

At Reverie, for example, the Washington, D.C,-based contemporary American eatery spearheaded by chef Johnny Spero, the recently launched tasting table is a pay-what-you-can concept, at least for the lucky few. Two guests per night can reserve a seating to pay what they can.

Similarly, when chef Aaron Martinez started as the executive chef at Elaia in St. Louis at the end of 2018, his goal was to remove any stigma of pretention from his restaurant.

The 900-square-foot Mediterranean concept, part of the Bengelina Hospitality Group, offers tiered pricing options for the tasting menu, ranging from $55 for three courses, $70 for four courses to $85 for five courses. The customizable experience, he said, has brought Elaia’s reputation back down to earth.

“I come from a fine-dining background, so I know that not everyone likes to eat like that,” Martinez said. “Honestly? I think these traditional chef’s tasting menus cater to the 1 percent, but you really can do fine-dining-level food in a more casual and less pretentious setting.”

The Elaia team refers to the different tiers as a “choose-your-own-adventure” experience, where diners will get to select from three to five options including dishes like gnochetti with cheddar and black truffle, aged duck or sweet potato chocolate mousse.

When any diner, regardless of pricing tier, can order anything off the tasting menu, Martinez finds that he can keep costs down by not wasting anything: You might find duck broth, duck-liver mousse, and duck heart, along with cured and smoked duck breast on the menu.

The traditional high-end tasting menu can also be a ponderous, even stodgy, affair. But some are finding that speed can energize the experience — and turn tables faster. What might be lost in food costs can be made up with volume, some chefs and restaurateurs contend.

At the omakase-style restaurant Sushi by Bou in New York City, chef David Bouhadana offers a lightning-fast omakase experience: a 30-minute, 12-piece dinner for $50 per person. 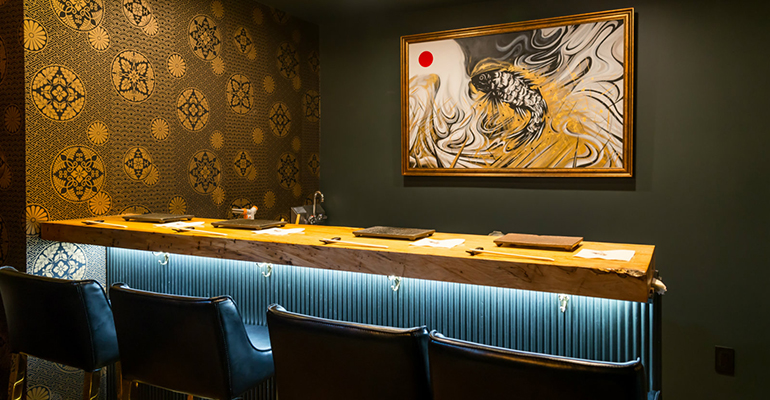 Bouhadana — who opened Sushi by Bou in 2015 —calculated the lowest price he could offer guests while still keeping his profit margins at a reasonable level, by considering the weight and number of sushi pieces derived from each seafood shipment.

That’s how he came up with two minutes per piece timeframe, with a few minutes left over if guests wanted to order from the a la carte menu. By keeping guest turnover high at the 200-square-foot restaurant, he can alleviate some of the cost of premium seafood, like octopus, mackerel or seared tuna. 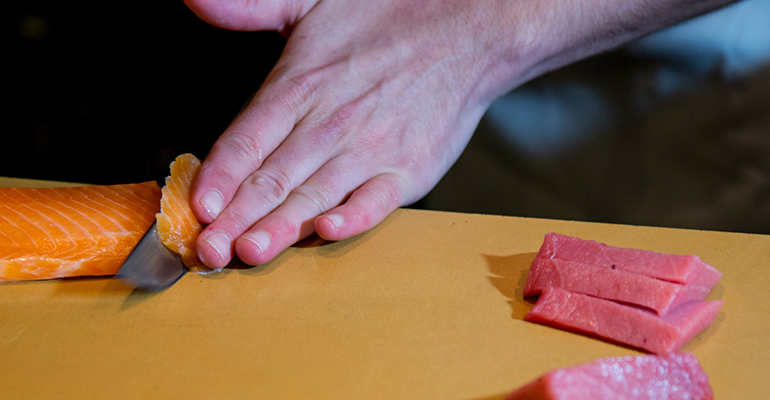 The result is an experience that is the exact opposite of a traditional omakase tasting where guests usually linger through a dozen or more courses for the whole evening.

“The second you sit down, the sushi drops,” said Bouhadana.

Does the timed tasting menu give guests digestive whiplash?  Bouhadana doesn’t think so.

“The reality is you don’t need more than 30 minutes,” he said. “When you go to these restaurants that charge $200 a plate, I always tell people you’re paying for the chair, not the food. Since my real estate value is low and my turnover is high, that’s how I get you in the door.”

Bouhadana, who has a somewhat controversial penchant for slipping into a fake Japanese accent, said Sushi by Bou was “one of the first to push the boundaries” to change the traditional omakase format. “People were going, ‘Wow, this Jewish kid is making great sushi.’”

Others say it’s not just about speed and lower pricing. Restaurants are also playing with the chef-table format to make these exclusive dining situations less intimidating.

For example, the omakase-style tasting menu at Japanese cocktail bar Kumiko — which opened in Chicago in December 2018 — is on the pricey side at $130 per person for a five-course food-and-drink pairing, but executive chef Noah Sandoval and creative director Julia Momose create a decidedly relaxed setting. Omakase customers sit at the bar and can completely customize their drink pairing experience.

When guests make a reservation at Kumiko through Resy, they are asked for their taste preferences for drink pairings, from whether they prefer cocktails, sochu, sake, wine, or beer.

When guests arrive at the 1,700-square foot restaurant, Momose and her team ask guests for their current mood and cravings so they can pivot on the spot to pair with the kitchen team’s creations, like a poached mackerel with charred skin that might be paired with a Sauvignon blanc.

The result is a less formal experience amplified by the casual appeal of sitting at a bar.

“The beautiful thing with a bar is you can lean in or lean back: either ask your chef/bartender questions or just take it all in,” Momose said. “At that point, you get to be the driver and we’re there to pick up on those cues or let you be.”

A look behind the curtain

To truly even the tasting table playing field, restaurants can also give guests a look behind the scenes.

Quiote — a modern Mexican restaurant that opened in Chicago in February 2017 — recently introduced a dinner series called Off the Record: Test Kitchen, featuring tasting menu-style dinner events from members of executive chef Ross Henke’s culinary team who often do not have the opportunity to take centerstage. 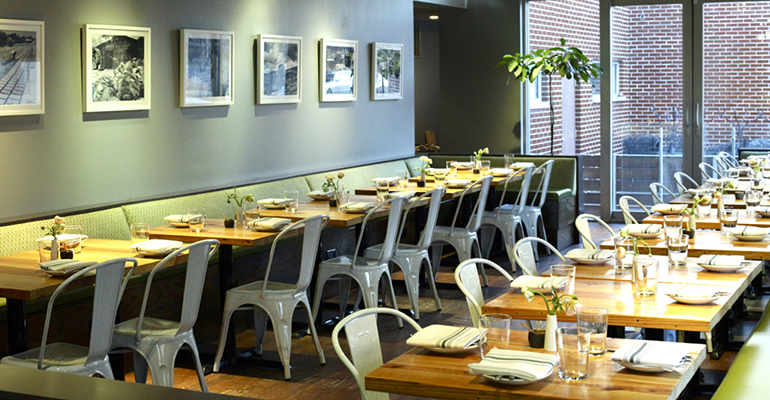 The first dinner series event was spearheaded by kitchen manager chef Ben Blum in January and featured eight courses of Eastern Mexican cuisine, including grilled octopus stew and plantain fritters. The next event in February was scheduled to feature culinary creations from Quiote’s sous chef, Joshua Crotty, with tickets sold on Tock. 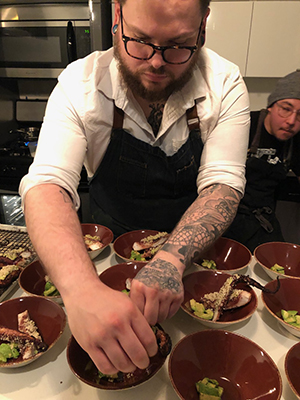 Chef Henke said he would be more than happy to feature dinners from any restaurant employee — from the dishwasher to the host — as long as they could prove they could cook.

“You are not paying for the big-name chef so it’s not about ego,” Henke said.

The result, he said, has been an outlet of creativity that has loosened up the definition of a tasting menu and even the brand of the restaurant itself. For example, chefs are not required to stay in the lane of Mexican cuisine. Crotty’s menu featured Nordic-inspired global dishes.

The tasting events take place in a living room-like setting, separate from the rest of the restaurant, that does not see any foot traffic from the bar, creating an atmosphere that’s more akin to an informal dinner party than a formal fine-dining marathon.

Henke strongly believes that tasting menus like Off the Record can be high-level, intimate experiences without scaring off the 99 percent.

“We don’t expect you to wear a suit and tie. You can come in jeans and a tee-shirt,” Henke said. “You’re gonna get crazy-good food no matter what though.”