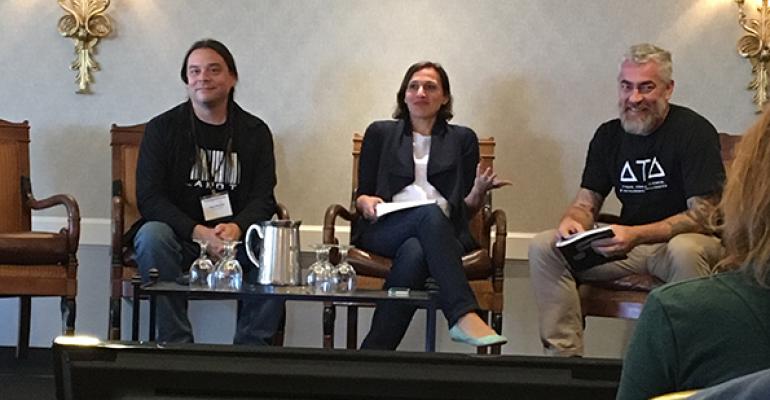 We’re all familiar with the phrase “local food,” but very soon we could be hearing more about indigenous food.

At the recent Sustainable Foods Institute at the Monterey Bay Aquarium, two chefs from two hemispheres talked about the commonalities they share in rediscovering indigenous food and ingredients, and bringing that experience to customers.

In a session moderated by food, politics and policy writer Jane Black, chef Alex Atala and “Sioux Chef” Sean Sherman opened the discussion by telling the stories of how they came to be where they are now.

Atala’s restaurant D.O.M. in Sao Paulo, Brazil is known as one of the top restaurants in the world. Sherman, a Pine Ridge Oglala Lakota Sioux from South Dakota, has been cooking for 27 years, and in 2014 opened The Sioux Chef, a catering and food education business in Minneapolis/St. Paul. His restaurant startup project just recently became the most-backed restaurant venture ever on Kickstarter, raising almost $150,000. He hopes to open in Minneapolis next year.

Both chefs seek to foster education, pride and respect for indigenous cultures through dining.

Atala spoke about Brazil’s massive coast and the overfishing that has become a reality. He sees indigenous culture as a way to protect the precious resource of aquaculture.

“The care that we have about not only the way we are fishing, but the fishermen and the traditions of these fishing communities is important,” Atala says. “Natural conservation is about protecting not just the land and the sea, but the men who live there.”

In his restaurant, Atala seeks out Brazilian ingredients to address the disconnect between people and real food.

“How many of us have seen a papaya tree?” Atala asks. “How many of us can recognize an orange tree without the fruit? That’s the disconnection. We want to reconnect ourselves with food. How much time do we spend respecting the meal?”

Atala had been trained as a chef in Europe years ago, revering the culinary traditions of France and Italy. But one day, “I realized I’d never be able to produce a French or Italian dish as well as someone raised in that culture,” he says. “Then I realized, no one can do Brazilian food like me.”

Like Atala, Sherman had dabbled in many world cuisines before deciding to go down a path that would revitalize indigenous food systems.

“One day I was watching a group of indigenous people of that region, and they were doing things the way they’ve always done,” Sherman says. “I found that really unique. I found some commonalities between them and [my experience] growing up on the Pine Ridge Reservation.”

But he wasn’t sure where to start, since a lot of traditions had already been lost by the time he was growing up on the reservation.

“There wasn’t a ‘Joy of Native American Cooking’ cookbook,” he says.

So through a lot of reading and research, he taught himself a lot about indigenous food systems, foraging, fishing, hunting and land stewardship. In 2014, he opened his catering and food education business, and later a food truck with business partner Dana Thompson.

Sherman works “micro regionally,” he says, focusing on the foods you could find walking around a lake in Minneapolis like natural wild rice and tuberose.

“We built a curriculum around indigenous foods. Corn and beans and potatoes, amaranth and quinoa,” he says. “People were producing things so naturally without fossil fuels. We’re re-imagining what a kitchen can be.”

He says there’s a lot about American food that we’re missing out on.

As the Sioux Chef cultural restaurant project begins, “we are opening up those doors and people are wanting to jump on board,” Sherman says, referring to including some local Native American farmers in the area, including a collective that saves native seeds.

“We’re trying to make a model so we can open up a lot of Native American restaurants, and show how foraging can be done in different regions—to show how applicable a lot of this knowledge is today.”

To sum it up, Atala states: “We’ve found that being local is the best way to be global.”

How one family-friendly concept is bringing back diners with kids
Oct 18, 2021