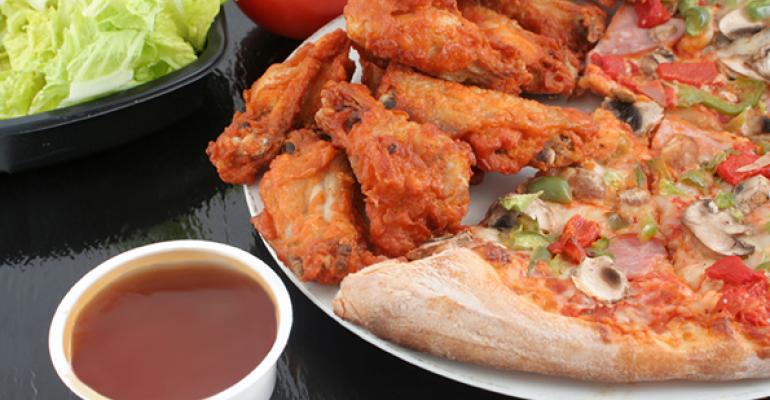 Sweet and spicy sauces kick it up a notch

Operators find that sauces with sweetness and heat help to drive sales of pizza and chicken wings. Full article sponsored by TABASCO&reg; Foodservice.

A growing number of pizza and wing concepts throughout the restaurant industry are attracting legions of fans by menuing a variety of sweet and spicy sauces that help to kick up flavor profiles in a big way.

“People have a growing appreciation for layered and more complex flavors,” says Mary Chapman, senior director, product innovation for Chicago-based Technomic, Inc. “Sweet flavors are always popular, of course, and a majority of consumers now say they like spicy flavors. So putting them together is a good way to provide those layers.”

Those layers resonate with a plethora of new pizza and wings concepts as well as several established ventures such as Buffalo Wild Wings, Wingstreet, Pizza Hut, and California Pizza Kitchen.

With the widespread move towards customization, menu trackers and restaurant operators predict sweet and spicy sauces will only grow in popularity.

“We believe this trend of spicy and sweet sauces will remain constant in the coming years,” says Carl Chang, chief executive and founder of 42-unit Pieology, an artisan pizza concept based in Rancho Santa Margarita, Calif. “At Pieology, we’re about providing guests with more options to customize, so sweet and spicy sauces and ingredient choices are here to stay.”

“Customers are looking for more complexity in their flavors,” he says. “Chef-driven concepts are more readily available and affordable to more consumers, and creative pairings of complementary flavors enhance the consumer experience.”

Over the last five years pizza has seen a 14-percent growth surge in restaurants while chicken wings have tracked even higher with an 18 percent growth spurt, according to Technomic.

More intense flavor profiles have been a big part of the reason why.

Technomic’s Chapman reports 76 percent of active flavor seekers agree with this statement: “I would like to see more restaurants offer sauces that feature a combination of flavors.”

At Boston College one of the most popular sauces now is orange-ginger, which is a combination of sweet and spicy. “Sweet and spicy sauces have become very popular for tossing over fried chicken tenders and wings on our Boston College menu,” says Pat Bando, the school’s associate vice president of auxiliary services.

When it comes to trying new and different flavor combinations, no group is more adventurous than college students nationwide.

“Twenty-somethings are very open to trying all types of cuisines,” says Beth Emery, director of dining services at Boston College. “Many of them have had wonderful opportunities to travel around the globe and have enjoyed diverse types of foods. They bring their favorite flavors home and introduce them to family and friends, which helps advance this trend.”

Jesse Gideon, who is chief operating officer and corporate chef for 15-unit, fast-casual operator Fresh To Order, agrees the younger generation is largely in the driver’s seat.

“The younger generations seem to want to take more risks with extreme directions of flavor whether it’s super sweet, salty, spicy, bitter, or a combination,” Gideon says. “They want to push the envelope.”

Craig Nickoloff, who is founder of the Nickoloff Companies and owner of six casual dining restaurants in Southern California, agrees worldwide travel spurs cravings for the new and different.

“Consumers are embracing bolder flavors that they have tasted on their travels, and they want them when they get back home,” Nickoloff says. “Everything is moving towards fuller flavors as evidenced by the growing affinity for Asian cuisines such as Korean, Thai and Vietnamese.”

Alex Cook, who is the chef and vice president of research and development at 30-unit Uncle Maddio’s, menus such sauce flavors as Sweet Thai Chili and Jamaican Jerk. He also asserts that Southwest and Caribbean flavor influences are gaining in popularity in addition to Asian.

“As consumers are introduced to new and different cultures we’re seeing more creativity in the food landscape,” he says. “I don’t see this stopping anytime soon.”

A case in point is San Francisco-based Palm House, which offers a Calypso Chicken Wing named after the classic Harry Belafonte album. The flavor is inspired by the chef’s experience working in Hong Kong and Thailand, and includes a dry rub consisting of a black pepper, ginger and coriander.

About three miles away at Hog & Rocks, chicken wings are taken up a notch by first confiting them in chicken fat until tender. They are then fried and tossed with a salt and pepper mix including Szechuan pepper as well as pink and green peppercorns. To balance it out they are served with a honey miso sauce.

At casual-dining behemoth, Buffalo Wild Wings guests are offered 16 sauces for wings that go from mild to Blazin', which is menued with the disclaimer: “Keep away from your eyes, pets, children: The hottest sauce we got. You’d better-be-ready Blazin'.”

“The desire for those complex flavors as well as spicy hot flavors skews towards Millennials,” says Technomic’s Chapman. “That group is also more frequent restaurant-goers.”

Pieology’s Chang agrees. “At Pieology, we’ve noticed that the younger generation/Millennials are more drawn to spicy sauces when designing their personalized pizza. Of course, this is something that varies among all age groups, but from our experience, it seems as though younger foodies are becoming more adventurous in their dining choices, and welcome that extra kick.”